(original post title):  no diss intended, but the thrill is gone … we’ll get to that. 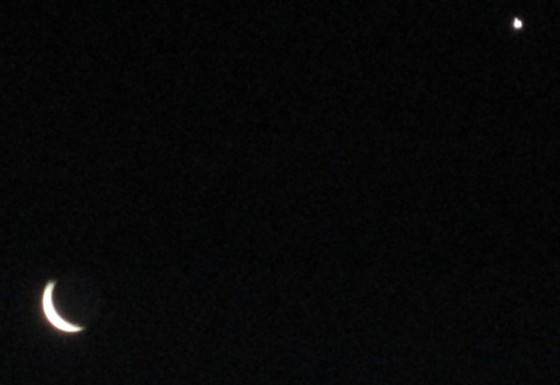 The End of Time?  hey!  I needed a good post title, which I’ll try to bend and tweak and twist to make this latest chapter in the history of the Man Without a History … contiguous with the heading.  (Yeah … right.)

Where did that (the title) come from?

— I used to read.  A lot more than these past few years.  And … not only did I read Brothers Karamazov (and many other ponderous tomes) I also read lots of light-weight tomes.  Almost everything by Kurt Vonnegut.  And, one of the two books by Mr. V’s son, Mark.

In The Eden Express (an autobiographical chronicle of his experiences with schizophrenia) Mark describes an imagined (hallucinated) conversation with Dad.  They banter over the silliness, the un-profoundness of Kurt’s works, and Kurt suggests that Mark open the book he’s reading (Bros K-mazov) to any page, and read just any sentence.  Mark holds the Dostoyevsky by the cover, the book flips open, a sentence part-way down an exposed page stands out.  Hence the title of this essay.  I don’t remember it from Bros K but have always remembered it from The Eden Express.  I used that sentence, and attributed it (erroneously, though I didn’t know it at the time) to Dostoyevsky, as the introduction to a short story I wrote, Respite.

A few years ago, shortly after I penned Respite, I received an email from someone researching Kurt Vonnegut.  The “someone” was, I think, writing a paper which tried to make a connection between KV and Dostoyevsky.  After a few email exchanges, the other party and I concluded that the sentence was not in B K, and somehow materialized (“of it’s own accord”) in Mark V’s book.  My co-correspondent may have been Donald M. Fiene.  But then again, probably not.  He (or whoever (s)he was) approached me initially due to a ‘hit’ from an internet-search for that phrase.

Every year, not only do Betty and I engage in playing music, we go to see other musicians.  This (so far) hasn’t been much of an active year in regards listening to others — friends and acquaintances (and ourselves) at a club in Fruita (Colorado) — the Cavalcade (or Cavalcade Fruita); Big Head Todd & the Monsters; Poke Squid; the Grand Junction Symphony Orchestra; the Indigo Girls; and B B King.

The Girls were the bestest tightest intertwined interesting music we heard (so far) in 2014.  BB King was not.

As a fellow hockey enthusiast also in attendance at the local BB King ‘concert’ summarized:  “the thrill IS gone.”

This is not to say BB King is a (still, barely) living legend, but he should have retired already.  Last year.  Probably before that.  On the one hand, if we had an opportunity for tickets to “meet and greet” Mr. King, with or without the guise or proximity of any music, that’d be one thing.  But for an event to be billed as a musical performance?  That, in my humble opinion, was mostly untrue.

I conducted an internet search of recent reviews and discussions of BB King concerts, and contributed to one:

having seen BBK in Grand Junxion (Aug 18) i agree with all the negative reviews, and stopped to let the positives affect me too. yeah, you’re right: not too many blues legends are “still alive” — but on the other hand it was like a hall full of people there to merely meet&greet. i left early because i did not want to be there when he keeled over and died, which seemed more than remotely possible, particularly when he almost strangled himself trying to get the guitar strap over his head.

There were people present of the same opinion as myself, but also many of which were apparently the hazy-eyed “blues afficionadoes” who shouted WE LUV YEW and applauded everything and maybe this particular evening was the (never-ending) zenith of their existence.  you know, objectivity is probably over-rated. anyhow, a friend of mine had a 4-word summary: the thrill is gone.  my summary: the emperor has no clothes.

he should have retired long before this, and according to prior reviews, maybe 10+ years ago. yes, it was “cute” seeing him bask in attention and beam and be charismatic, but we weren’t there for “cute”, were we? The charisma was un-mistakable  but most of us thought we were going to A CONCERT!  not so.

BB should show up first thing in the show, talk (hopefully less than a 15 minute banter), introduce the band, leave, and let them rip!

and what certainly didn’t help at this occasion was a somewhat surly lout in a baseball cap outside the doors to the venue.  People were not exactly leaving in droves, but the early departures were increasing in frequency.  Betty and I were at the top of the stairs heading down to the parking lot.  This fellow was inquiring loudly to anyone nearby “what did you think?  why are you leaving?  Didn’t you enjoy the show?”

I knew better than to talk with him, but Betty apparently thought he wanted to engage in reasoned discourse.  We can only presume that he was a “roadie”, someone employed by the band, and not at all capable of objectivity and lacking in P R skills as well.  Trying to talk with such a person does nothing to undo whatever tarnish the evening’s experience already had.  I can only hope that if he is, indeed, affiliated with “the outfit,” they either let him go or give him a good talking to.

I mean and meant no “diss” to a living legend.  Remember him as he was …

The forest-fire haze shroud over Mt. Garfield and the Bookcliffs, as seen from much higher up, Land’s End on the Grand Mesa — about a month ago.

While i/we’re on the subject of politikill un/in-corerectnous, i heard on the ray-dee-oh recently that NYC had more heroin overdose deaths last year than in several prior years.  Which brings me to a solution to a problem ….  We’ve also been subjected to several media accounts and hand-wringing about Executions by Lethal Injection gone awry this year.   Wouldn’t you suppose that many (or most) police evidence and storage rooms have lots of heroin (and other fun stuff) seized from criminals?  More than enough to over-dose a lot of people?  Instead of trying to calculate just how much of whatever it is, and attempting precise combinations and mixtures of the former not-too-reliable killing potion — why not just a big old whallop of heroin?

Below, the view to the west across the northwest rim of The Mesa, with 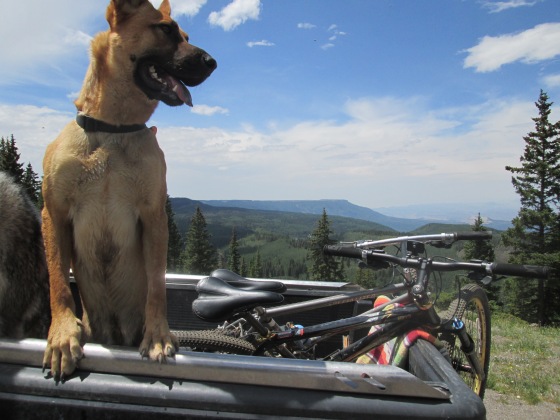 and without a dog in the foreground.

another potential death march run, this one in the mountain lion’s territory –>

there were two (‘death march runs’):  one in an area which (many years ago) i had the only mtn-lyin-siting i’ve ever had.  i ran a trail on the north side of the Uncompahgre Plateau, adjoining Unaweep Canyon, and with two dogs scoutin’ the trees as we ran/stumbled along, i thought about the big cat(s), and

A few weeks back I ran along north Fravert Rim.  no, no mountain lyin’s, just millions of years of colorawdough river geologic history, peeled away beneath.  Like many (most?) runners — it’s something we do:  do the workout, but frequently go someplace where you can ponder whatcher runnin’ thru’.  Geology, in this case.  I could see across the Colorado River Valley, ten, a dozen miles perhaps, down to the ‘Wivver perhaps 600 or 700 feet below – many millions of years of cutting and swathing and bending and flooding and oxbows and back-and-forth, going ever deeper.  Heck:  a half-billion years or so, THIS will be THE Grand Canyawn.

Betty has a problem with the NO FIREWERX.  “Let’s get lit up and RIDE”, she sez.  We’re near Waterdog Reservoirs, the Grand Mesa.

and, stop reading now while you can, a poem …

i still find time to be amazed.

Might? it does. the layer of overlying tedium over the AY-MAY’ZD thickens. but …

maybe i’ve seen it all before, but i don’t remember, and if that’s so, it still looks new.

the sun shines through a hole in what seems an impermeable wall of clouds, brightly illuminating just a patch of hillside to the west. there’s a cloud-bank within a cloud-bank of cumulus just over the horizon which has an off-white/grey/creamy color which at first is barely discernible from the rest but on a second look stands out.

what does that mean?

i do have to remember, that the body is separate from … the mind. the dharma. the continuum. if there really. is. a continuum. “it” (whuddever ‘it’ is) could itself be an illusion. it’s just now. continual now.

and thinkin’ about gittin’ older

and the dawg pharts, a good solid full-bodied one, in answe(a)r.

we/i/you continue fillin’ in the spaces, between the