whatever it is, or was,

boiled down to one thing — I think it’d be that

THE GLUE BETWEEN THINGS.

You might say it’s our elusive friend, Naggy-somebody (I think her last name is “Wall”) — or the essence (or the extreme profound total ultimate lack of essence) of the Abyss — or bein’ fa(r)miliar with the Tao.

Also, (moovin awn) i’ve identified with being a RUNNER (fer lackuvabetturwerd) for many years.

how many? lots …  (hey! in the event you too identify with ‘running’ and/or have a morbid curiosity, check my series of blogs related to runnninnng).

me and “my boys”. at the Portland (OR) Zoo Turkey Trot

if i had a specialty, it’s “butchering the classics” with the harmonica.  hmmm. butchering classics whilst torturing the instrument AND anyone around to hear it.  i’ve got 2.5 regular “gigs” (as of later 2015):  i play the nashunull anthem for (a) a big high school track (and field) meet, and (b) the local college’s hockey games, and (b/c) Betty and i are somewhat regular at the Cavalcade (Fruita) monthly variety show (see cavalcadefruita.com, also on Facebook) 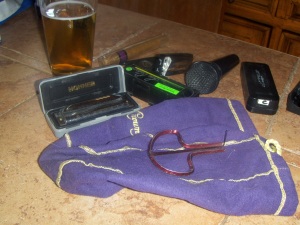 yes, that’s a JAWHARP in front. 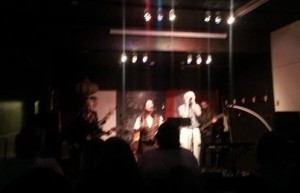 (as of 2015) every Monday when i go in, i wonder how in the heck am i going to make it to Friday?  oh yeah, i’m a Petroleum Engineer, for a regulatory agency — which means i tell real P.E.s how to do their job, or advise them, or have them convince me (usually easy for them!) that whatever procedure is planned is not only feasible, but abides by “the rules.”

never-the-less, i’m proud (however far i allow myself to identify with the concept of “pride”) of what my group allegedly does, but i keep a low profile.

sometimes things are rather sublime, calm?, and unexpectedly borderlyingly calm at the drill-site —

in all the noise and smoke and earth-shaking and geologic upheaval and exploration, there is the possibility of perceiving a unity in all things.  one foot in the industrial dirty commercial monetarily-greedy grubstake-betting-on-the-wildcat world, and yet the other foot can be beyond all things which we can identify.  try, just try, to attach a label to it.  on rare occasions, i stand outside of things and marvel at how the apparent incongruity can seem so …

the one on the left drills the exploratory hole. the smaller one ‘finishes’ it off

inuk-thingies.  ‘s what i call the thingies i make, which are a sort of inunnguaq, inuksuits, inukshuks

married, with kids, & 2 grandkids (okay, i’m not exactly young).  the kids ain’t with us, they’re on their own, i think.  they could pass for and as normal.

oldest, and worst, ICE-HOCKEY GOALIE, in our league.   (i might be the oldest in the state?!)

a team i was on for a couple years was changing clothes, cleaning-up, everybody yakking, after a game.  one of the captains pointed to one player and everyone commented on his strong points, and not-so-strong points.  they talked about the player next to him.  finally, they focused on me.

“well,” someone said, “he’s got heart, enthusiasm, plays as hard as he can … but …”   “he’s got no speed.”  “no hand-eye coordination.”  “and slow reaction time.”  a fourth player added:  “hardly any real athletic ability whatsoever.”  so there you have it.  there are just four minor attributes (well, lack of attributes) which keep me from being a real good strong & effective fast player.

i used to be a NUMISMATIST.

I was also the custodian of Bruce 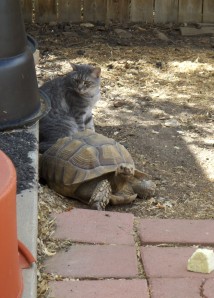 Bruce is the heavier one with the shell.  Walter (looks like a cat) was Bruce’s bud, and hung-out with, and used to sleep in the same cave. (walter disappeared a couple years back.)

Bruce was ‘donated’ (on loan to?) a sort of “children’s zoo” in a nearby town.  This occurred after we had custodianized Bruce for almost NINETEEN YEARS.  Bruce has lotsa company of recent …

And … I try to go about my day without a care in the whirled, but, quite often … 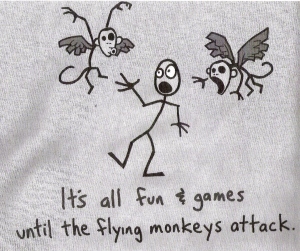