Summer.  Later summer — usually forest-fire season.  Adds color to the sunrises, and ~ A view of The Mesa (the W. Colorawdough Grand Mesa) on a clear(er) day — some months ago!  Since then … One can stare directly at … END_OF_DOCUMENT_TOKEN_TO_BE_REPLACED

Below, not easy to discern, but an ARCH a few miles west of Glade Park. A way a lone a last a loved a long the Riverrun, past Eve and Adam’s, from swerve of shore to bend of bay (the … END_OF_DOCUMENT_TOKEN_TO_BE_REPLACED

I have been accused of not making much of an effort — at anything — more and more as time goes on. And I make little or no effort to go or do or be anything/anywhere/anywhatever resembling “the in crowd.” … END_OF_DOCUMENT_TOKEN_TO_BE_REPLACED 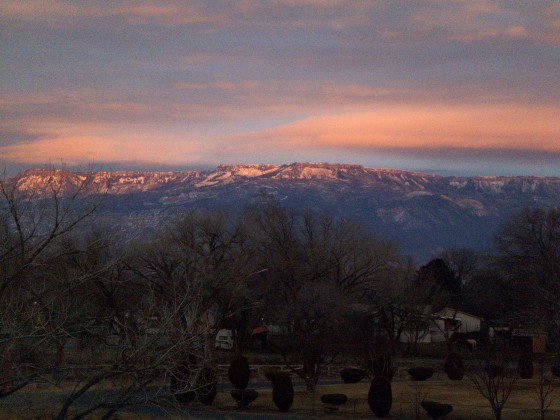 Above:  “the Mesa” last winter.  For my two or three (ir)regular readers, it’s pretty much THE VIEW from our house to the east.  In later September, ‘fall’  was hitting the high country at full peak, so …

Betty decided that a trip up dere wuzz a good idea, to ride our bikes, get the dawgz out, and take lotsa photos.   B ‘n “Doolie” on the Mesa-Top Trail. 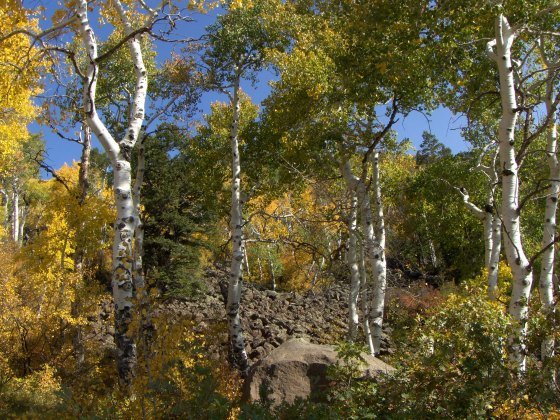 We drove up Land’s End Road which is not the way to get up there for anyone in a hurry.  The Road is ‘serpentine’ — winding, switchbacking, gravel with a good crop of washboards a lot of the time.  The upper five or so miles it’s barely wider than a vehicle, so special caution is recommended there.  However, today, we stopped frequently to try to capture the changing of the seasons, and the few other people we encountered were of similar dispostion.

We  slowly gained in altitude.  Above, we approach being level with the Mesa rim.  The Grand Mesa is often called “the world’s largest flat-topped mountain.”  Could be true.  Geologists say that umpteen (25?) million years ago, there was a volcano 15,000-some feet higher than the present 10,000-foot plateau.  A combination of the volcano blowing up and an outpouring of lava down to the valley floor resulted in the somewhat impermeable difficult-to-erode basaltic layer comprising the Mesa top today.

Looking down at what we’ve just driven up.  The Mesa top is over 5,000 feet higher than the Grand Valley floor, our house included.  What isn’t characteristic in this photo is the HAZE.  Usually things are a lot clearer.  There was a big forest fire up north in Wyoming, and the winds ‘n breezes must have been prevailingly nor’easters.  So, we were afflicted with a much-more-so-than usual diminishment of clarity.

However, we discovered that the haze also diminished as we gained in altitude.  The sky became clearer, blue skies, long as we didn’t look down the mountain.  Still, you can tell that off the foot of the mountain the landscape is the ‘high desert’ of west Colorado.  Also — if not for the haze, we would be able to see the LaSal Mountains just east of Moab — about 100 miles to the west.

Not all the aspens change at the same time.  Generally, however, this is a function of altitude, and the higher we went, the larger percentage of trees had experienced “the change.”  There was more red than we expected.  I hope that is reflected in later photos. 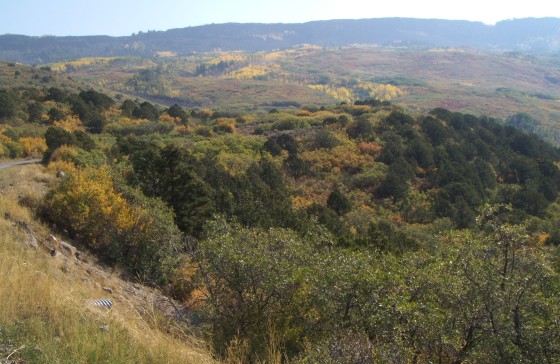 I’ve backtracked in sequence a little.  More haze, a couple thousand feet in elevation down from the top.

We are on top, the top of the world, looking south at the Flowing Park / Indian Point arm of the Mesa.

Above, is the view adjoining the previous.  Dropping off into the haze, down to the desert.  You might be able to recognize that a pine tree (fir, I think) towards the left in the far foreground (in front of the golden wall of aspens) is also pictured in the previous shot, towards the right.

I jump out of and back in sequence — this is perhaps 1,000′ or less in climb to go, with another darned section of washboards in the road. 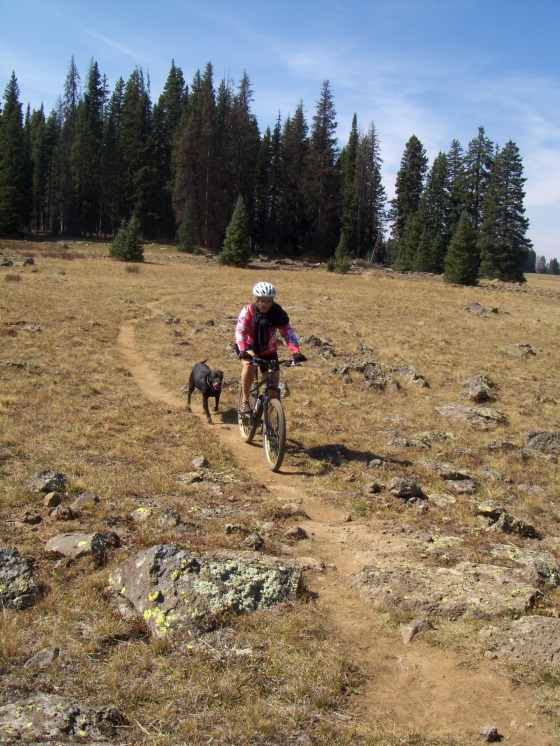 Dually hangs close to Betty.  The other two dawgz were (as usual) off harassing small creatures and/or looking for mud bogs to roll in.

I don’t know about you, but the zenith of the Autumnal Peak practically is shouting here.  And I didn’t notice the contrail ’til later.

A few more colors in the palette used here — reddish, orange, yellow, green, the grey of the brief pavement section in this section of the Mesa. 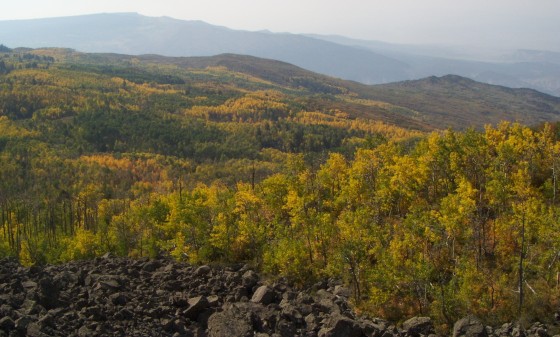 Note (and memorize) the profile of the distant hazy ridge.  You should recognize it again, further away, in the next photo.

Yes, we’ve stepped back from the previous view.

Back home, this bizarre fellow was clinging to our door.  Stick-bugs might be abundant where you live, but for us, this is a more-rare sight than the more-common praying (preying?) mantises out our way. 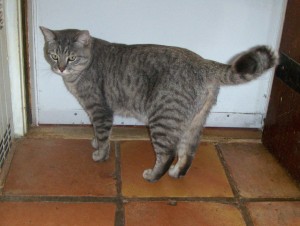 On the other side of the door … we also recently lost (so we fear, it’s been several days now since we last saw him) the H P A (one of Walter’s other nick-names, the “Humongus Pongus Among us”).  He was our favorite.

A typical vista for the day — just a bit down from the Mesa rim — with the trees framing the typical basalt cliff-face which, in turn, frames the Mesa top.  The exposed cliff-rock is the edge of the foundation, as it were, of what makes the Grand Mesa what it is.