We got out of there just in time! I was looking to buy a Portlandia DVD @ the airport “Portland items” gift shop, they didn’t have any, I bought Zombie postcards instead. I showed them to people sitting around us … END_OF_DOCUMENT_TOKEN_TO_BE_REPLACED 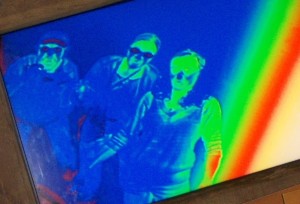 “what the predator sees”

“Grand-pa” and “Grand-ma” went to Portland (OR) earlier this month for the main purpose of BABYSITTING.  Our daughter was scheduled to work nights and Dad was out-of-town on an extended work field trip.  This past summer, Betty (gramma) flew out for a week and the airfare cost was about half of what the all-night babysitter would have charged.

Our send-off omen leaving home (west Colorawdough) was the spiral-mandala-cloud of sunrise. 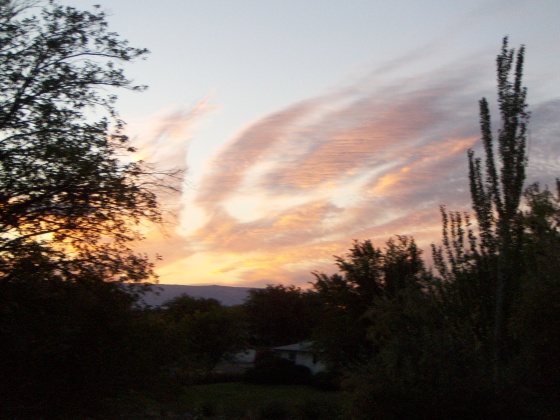 For being first-time grandparents, and “the kids” living fairly far away, we’ve been lucky to visit with Eddy more than we expected — this would be Gramma’s 6th time.

I had thought to bring something bought at the downtown market a couple years back, the clever unique meat-cleaver thru’ the head thingy.  We usually try to attend the weekend downtown market each trip out there, and wearing the thing helps? contribute to the free-wheeling rollicking carnival atmosphere.  Fortunately, I forgot it, and we didn’t make it to the event anyway.  However, arriving at the airport, I did buy something which at first was IRRESISTABLE — 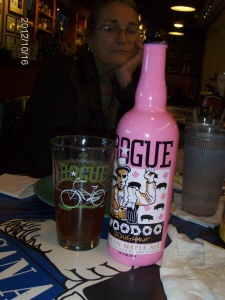 A kiosk of “made in Oregon” products had Rogue Brewery’s tribute to the essence of WEIRD Portland — I could NOT pass up VooDoo Donut Bacon-Maple beer.  Lovely kaopectate-colored bottle, eh?

As you might sus/ex/pect … one would have to be awwfully thirsty, borderline desperate — and just plain feelin’ wee-urd … which I was when we returned to the airport the following week.  It was, well, beer, but I’ll pass on the next one.  (Rogue’s other, more-normal, products are quite good!)

We tried to do and/or go somewhere/something every day — the sort of stuff we don’t have back home.  None of us, Rachel included, had ‘officially’ been to the Portland Zoo.  (We had been to it while running the Zoo Run during past Thanksgivings).

I thought I had taken photos of baboons, lions and tigers and bears oh my.  Either didn’t turn out or weren’t took.  “Bear profiles.”  (Eddy and me standing against a poster showing how big and tall various bears are.) 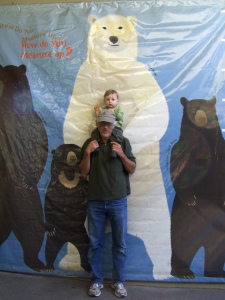 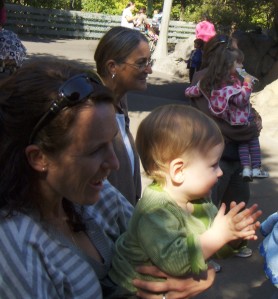 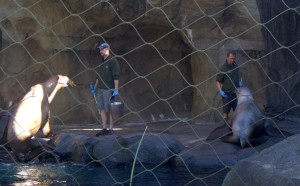 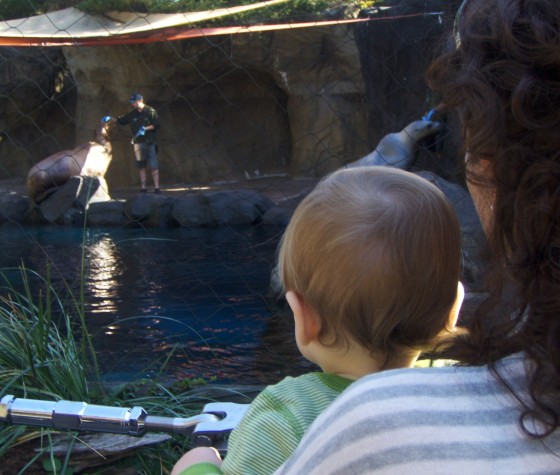 We walked down a tunnel to see the seals below, in the wet stuff. Eddy involved in grokkation with the sealz … 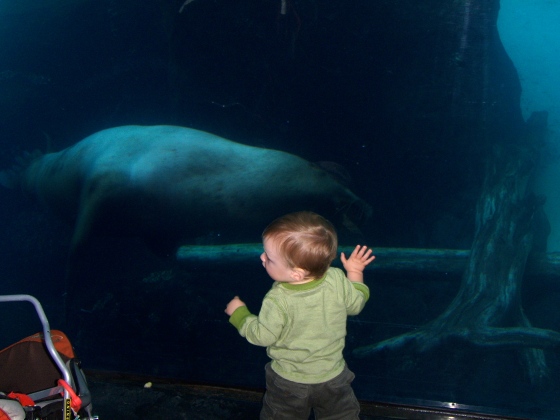 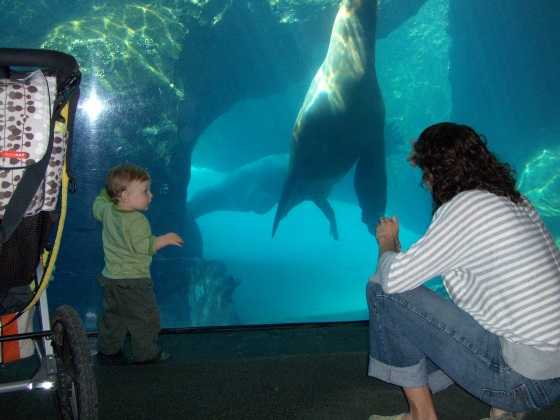 Nearby, outside the boa constrictor cage, there was a camera and screen showing “predator” heat-imaging!  You know, the Predator sees our heat (or lack of).  Ostensibly, this is how the boa constrictor sees — in the infrared.  I don’t think we look very edible … 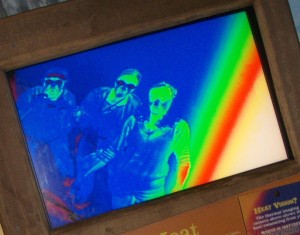 Speekinuv beasts …  we also communed and visited with Eddy’s “big brother,” Hugh.  Hugh has been with Rachel since 2003 or so.  I found Hugh and his sister as very small kittens in the field below our house.  I carried them up and Rachel, who was visiting but leaving right then, said “I’ll take this one.”

She (and Hugh) have lived at a half-dozen locations in Denver, two in Portland, and we have kept Hugh for many weeks and months when Rooch ‘n Ben would go on long trips (e.g., 6 weeks in New Zealand). 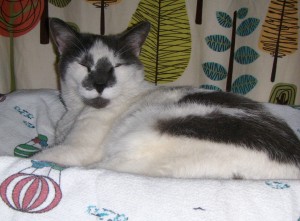 Hugh is obviously a dude.

Quite often we went out to eat, and quite often made good meals in the house, but sometimes I’d get hungry …

Nutella — Why hasn’t anyone told me about this before? 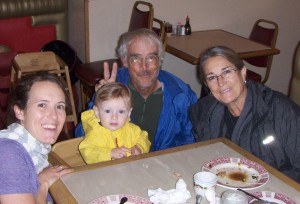 Above, we’re at House of Louie, in Chinatown.  I had to get my Dimsum fix.  This time was somewhat disappointing.  There’ve been occasions of enjoyable and quite satisfactory dimsum gobbling previously, in Portland Chinatown.  Hopefully next time as well.

Right after this, we toured the Chinese Gardens, in the rain. 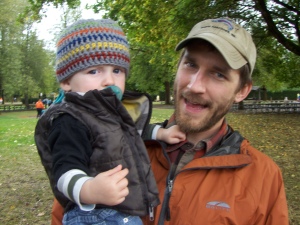 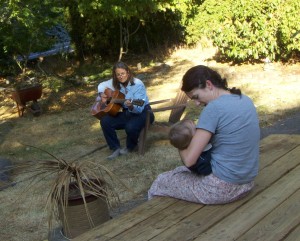 Ben had been wanting to cut down a ‘dangerous’ branch high up in a tree.  The branch was hanging on by the proverbial xylemical thread, and he eliminated the possibility of it falling down and killing someone.  And he wanted to play with his climbing gear. 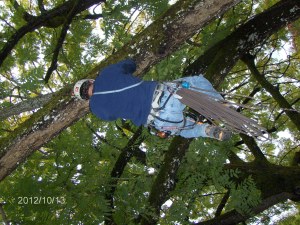 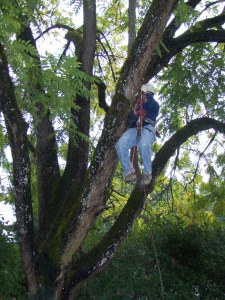 Prior to visiting Oregon, I went on-line and entered myself and daughter in the ORRC “Blue Lake 5k.” 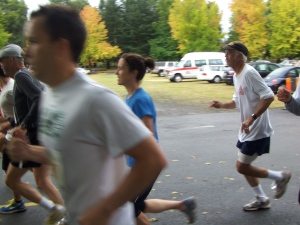 We’re starting …  I’m the veritable pixure of grace, tight-fitting racewear, form, eh?  (Ha!).  Below, I’m just goofin’, but shortly after decided to pick it up. 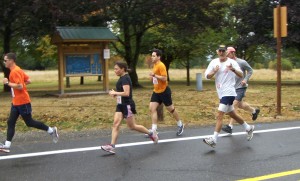 For many months now, each time I entered a race, I usually set my PW.  Runners strive for and talk about their “personal record” (PR) for a given distance.  Well, those times for me is long gone.  I figured I’d set another PW and planned on takin’ it easy.  A couple days before, Rachel and I ran around a park while Granma went swimming at the community rec center.  My daughter hadn’t run a race in over a year,  but was still in good shape, primarily due to riding her bike to and from work.  I mentioned, as she motored away from me on an uphill, pushing Eddy in the stroller, that she could probably run a 22-minute time easily.  “Probably,” she shrugged.  I figured I’d run in the 25’s, setting yet another PW.

“Da rooch” (my beloved daughter Rachel) cruises, smiling …  There were several out-and-back sections of the course, and each instance I’d count women ahead of her.  When she passed, I’d hold up fingers for what place she was in the women’s race.  As runners know, this race-within-a-race can sometimes be difficult to assess due to the numbers of men.  The first time I saw her, I held up 8 fingers.  The next time, I held up five … 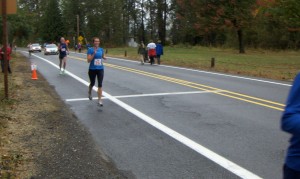 She would finish a close third among women, 13th among all runners, in a time of 20:19.  The next day, when we were running around Tryon Creek State Park, she turned and said “Maybe I’ll start training.”  By that, I assumed she might start training specifically to run faster, in races.  Oh — I ended up not setting a PW, hitting the finish in 22:55, my fastest time for over two years. 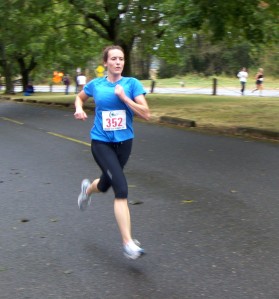 Eddie plays with one of our “finisher medals” at breakfast afterward.  We each ended up winning our respective age group.

We enjoyed our week-plus out there, but there was a lot we didn’t do nor see.  The downtown market.  A day-trip to the coast (ocean experiences are few back where we come from).  This rock, below, basking in the west Colorawdough sun, was sediment in an ocean, more than just a few years back.  An ocean of lichen, eh? 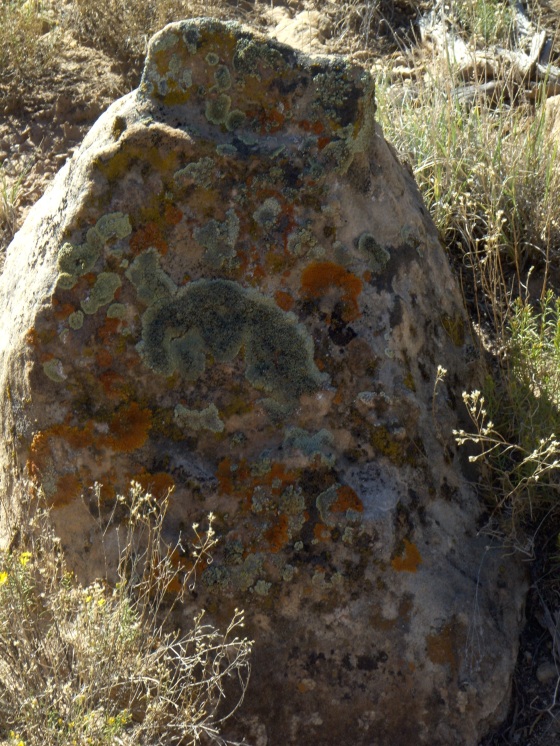 the spiral sunrise of what some might consider the promise of a bright tomorrow, but, jaded Betty ‘n me, we know better … 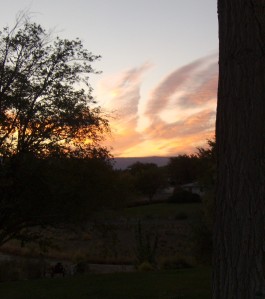 For my two or three ‘followers’ – SOME GOOD NEWS. I was away from the home docking-port, and the computer system where I was temporarily (?) stranded did not have the port nor aperture nor wherewithal to accommodate my digital camera disc.

So … we’ll have to IMAGINE, without pixures, what nonsensical irrelevant whimsical insights? (outsites?), observations, summaries, outrages-in-progress, etc. and so forth have accrued so far.

I will insert pertinent (?) and (probably) impertinent? un-pertinent? pixures in the following ver 2.0.  heh.