The Annual St. Sisyphus Highly Desperate (or Demented, or Definition?) Journey. THAT’s Mt. G, seen from the Valley side, south side > Conrad, Joe, and I were trudging up the steep shale slopes of the Bookcliffs off to the west … END_OF_DOCUMENT_TOKEN_TO_BE_REPLACED

Xplorations into the anti-matter Universe:

If you go flying back through time and you see somebody else flying forward into the future, it’s probably best to avoid eye contact. 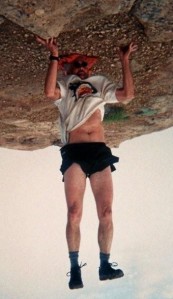 Shortly before the start, Garfield Grumble 2003: I was wearing a Central High School track singlet, inside out.  My son, a discus-thrower, had taken it home after his last season.  (Besides, it matched my CHS sweat pants, used as pajamas.  My daughter brought the pants home after her last cross-country season).  Somebody made a comment, hinting at theft of CHS property.

“No,” I said.  “This is from the anti-matter parallel universe – where the GOOD people (including my not-so-evil twin) reside.”  Good old Lartnec H.S.  Go, SROIRRAW, fight, win. 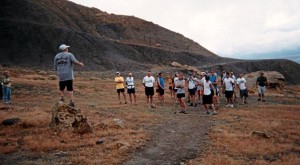 The race started.  I attempted to assist Joe Schwarz in the traditional musical send-off.  He put his trumpet away in his car; I tossed my harmonica in mine.  All the other runners were concentrating on the task at hand (they were already running away).  Stepping carefully over the Starting Line Snake, Joe and I trotted down the road.  My two dogs scurried nearby.

Quantum physics… the Heisenberg Uncertainty Principle infers that one can KNOW the position of an object at the cost of NOT KNOWING its momentum; or one could know momentum but not the position.  We were spread out in space in time.  Not being sub-atomic particles, there was probably a good deal of certainty as to the nature of ALL our physical and energetic properties – but we didn’t really want to know.  We wanted to question the obvious, to re-define the boundaries and push the envelope.

Joe talked of relativistic time effects in marathon running.  How the last six miles usually seems to take as much or more time than the previous twenty.  “The last mile takes forever,” he said.  “And the first mile goes by in a blur.”

… Relativistic time effects.  And how space, and place, also, are malleable.  Joe continued musing, each cycle of the conversational spiral encompassing increasing transitoriness.  Transitoriness?  Whatever.

Six days later I asked Joe if he remembered what he was talking about.

“Talking while running is just like drunks talking at a bar,” he answered.  “It evaporates almost as quickly as you say it.  It doesn’t mean anything.”

“It ain’t the triple jump no more.  No jumping required.  Now it’s the ‘Water Tower’ 5-mile.”  I mentioned that one aspect of the new Water Tower course had participants negotiating through narrow steep-sided arroyos.  The walls were often less than eight feet apart, and about ten feet high.  “Running through those reminds me of the rebel fighters zooming through the canyons of the Death Star.”

“It would be fun to make a video of that as you ran.  Perhaps while wearing a big Darth helmet, and a cape.”

We discussed a few other subjects.  I mentioned how there were not just one or two fast women runners in our area.  What might be surprising to the school-age runners was that some of these “older” runners had children – and were STILL really fast.  Take Leanne Whitesides, for instance, THIRD in this year’s (2003) Bolder Boulder Citizen’s Race.

“How many kids does Leanne have?” asked Joe.

I told Joe about Betunada’s Observation Regarding Kids, #3:  when parents have one child, they outnumber that child and the parenting situation is relatively easy to manage.  Two children represent having the parent’s hands full – sometimes the situation is “manageable,” sometimes not.  Three kids? – The parents are OUTNUMBERED and it doesn’t matter if there are three, four, or more.  I concluded that Leanne (and husband) had “more than two.”  You can count, identify the position and momentum of one or two children most the time, but more than that, there is definite spreading-out of the time-space matrix — The Heisenberg Uncertainty Principle in Parenting.

“Leanne has more than two,” I answered.  There could be four children, or three, or five, but due to momentum and position uncertainties, I could not reliably and/or scientifically be 100% certain.

This reminded me of a tidbit from a collegiate anthropology class.  Frequently, so-called “primitive” tribes had been ‘first’ – encountered by professional anthropologists.  And, some of these tribes had numbering systems consisting of: ‘one, two, (and) many.’

Joe then predicted that we would pass “many” runners on the uphill portion of the course, about a half-mile away.  I predicted that I would lose “many” places on the downhill.

Just then my dog, Doolie, ran right in front of me.  He had violated the International Track & Field “Lane” rule:  I had to shuffle to avoid tripping over him as he ran immediately in front of my feet.

“Out of my way, Doolie!” I shouted.  After a few seconds consideration … “and stay out of Joe’s way too.” 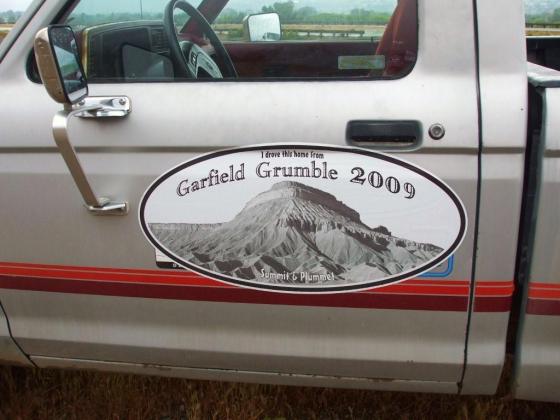 I did NOT pass “many” on the ascent, but saw “many” not too far ahead.  Beer at the top.  Water for the dogs.  Joe, stopping occasionally to snap photos, arrived at the summit shortly after I did.  The guy who arrived just ahead of us, waiting to become “un-dizzy” before continuing.

Two more runners came huffing up, sipping the obligatory water, shaking another cup over their steaming heads, and the four of us continued towards the descent.  “Dizzy guy” kept Top of the Hill Aid Station Girl company for a while longer. 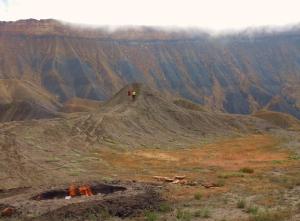 FLAMING FINISH LINE.  Well, by the time I tottered down, it was somewhere between flaming and smoldering.  Plenty of beer.  Boom box.  Beautiful Breckenridge MaryBrooke asked, “Are all the local races like this?”

Wish I, in good conscience, could have answered “yes”.  On the other hand, “no” – the Garfield Grumble is unique – an entity with it’s own separate and different identity each year.  In these uncertain times, we can be fairly sure that the 2004 Grumble will, again, be wierd.  (And, of course, a good work-out).