Yes.  As the man said, driving the Interstate thru’ Pendleton, Oregon over 30 years ago, the Suruasooraboob was seen crossing the road.  I’ve been on a mission ever since.

Basically — don’t look for what is there.  Keep searching for what isn’t there.  Not long after, I formulated and internalized a kind of dictum-operandi:  it’s THE GLUE BETWEEN THINGS. 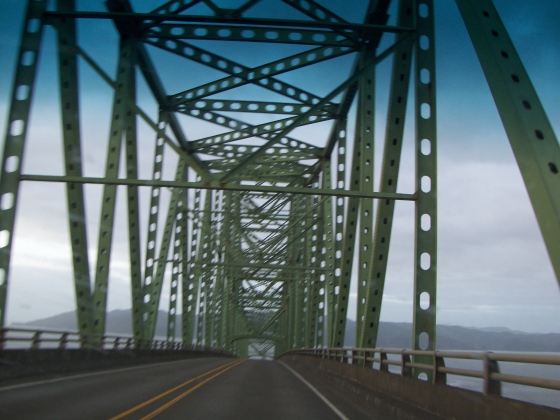 We cross the bridge between day and night.  Between sleep and waking up to begin the day.  The job and what you do after the job.  What may seem ridiculous; what is actually sublime.  Dreams, wallowing in the mud.  Recently, many of my dreams seem to involve mud-wallowing.  Could it be I might find a diamond or gold while mucking about in the mire? 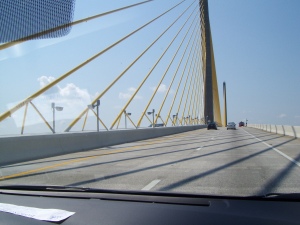 one of the WEIRDest

discoveries was, after    working for a fellow  named BEN BULBOUS  for a few years (and not knowing we worked for him)  was the chance stumbling upon a picture of W B Yeats’ gravestone.

on life, on death.

From Under Ben Bulben (“Last Poems and 2 Plays” 1939).  And yes, it seems most of my friends are, in more ways than the merely corporeal-dispatched, expired in other aspects of “gone.” 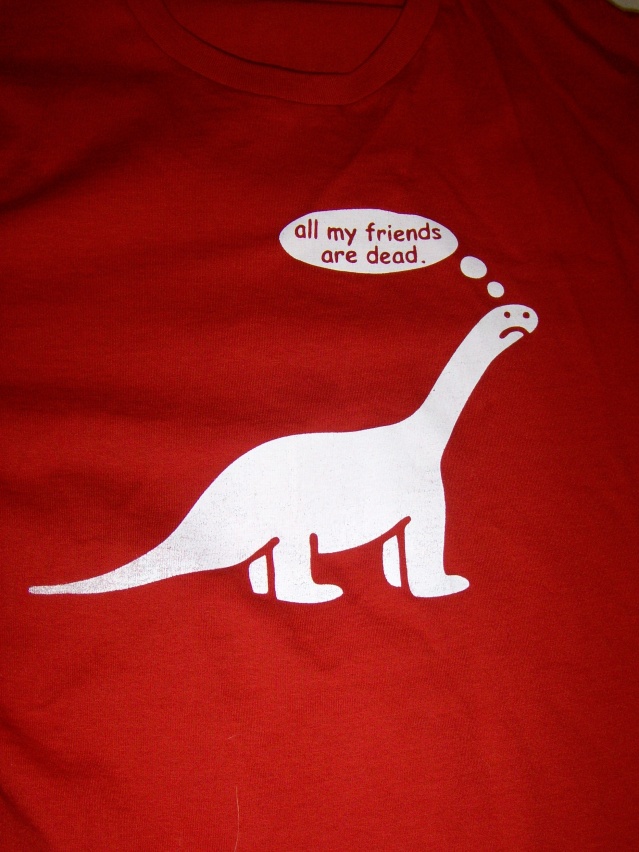 Oh, poor lonely dino …  wandering the landscape seemingly alone.  But few things are as they seem.  You are never, really, very, alone.

I was part of a close-knit group of compahdres for most the teen-aged and early twenties years.  As we didn’t exactly have a mentor, considering ourselves more-or-less equals, we invented an entity whom we named BEN BULBOUS.  Little did we know, that perhaps Ben Bulbous, in a sense, invented us.  Below, Ben and his muse frolic at ocean’s edge …

Professor Bulbous re-entered our collective lives a few years later.  Aspiring psychology students, all (well, most) of us, we acquired research positions based in the Univ. of Colo. Muenzinger Psychology Center studying a fledgling and cutting-edge project tentatively called “Amphetamine Psychosis.”  The lead researcher was, to our surprise — Benjamin.  (At first we all were mind-blown.  Later some of us claimed that this wasn’t a ‘surprise’ — that Prof. B had, behind the scenes, arranged for this juxtaposition of serendipity and continued joint exploration all along).  Well, I was surprised.

Below, some of our research subjects on a rare supervised trip away from the facility.  They had to be chained together, as if not, they would wander off and cause trouble in three different places.  This way, if they shambled off, the trouble was usually confined to just one location, and we usually could find them fairly easily.  Before they got into more trouble.

We can’t verify this with a high degree of certainty, but we are darned sure a couple movie-writer/producers were aware of our work with Delmar, Everett, and Pete and based the main characters in a big budget movie they made many years later on them.  Everett had an obsession with hair gel, it was either Pete or Delmar who considered gophers and other ground-dwelling rodents a delicacy when roasted on a stick, and the other guy frequently thought he was in danger of transmogrifying into some sort of reptile.

Our work with Delmar, Pete, and Elliot was mild compared to the ever-elusive and seldom-seen Dopey.

And I thought we had endured enough dumpster-diving while previously unemployed as starving under-grad students.

After a few months of amphetamine-psychosis research, we were prepared for what Professor Bulbous called “the next steps.”

“Look for the energy vortexes.  You might actually see the lines connecting many different life forms.”

Watch the river.  But, remember, that is but a small part of what is going on .

The river is watching you.  And there’s no way you can even begin to think you know what it’s thinking. 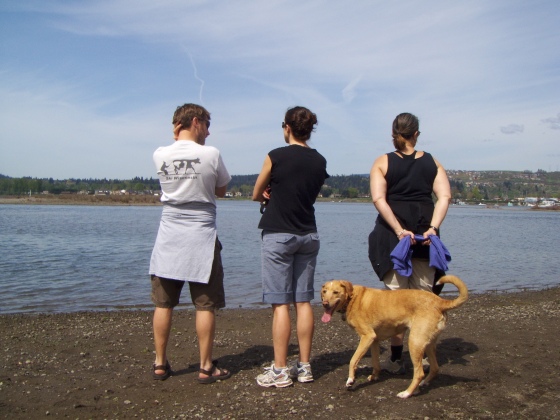 It might be safe to say that “Pete” (or whoever this is, below) is not only fascinated by the river, hypnotized by it, but

about to surrender part, or all, of his life-force to it.

Or is Ben Bulben under everything?  W B Yeats was no light-weight … 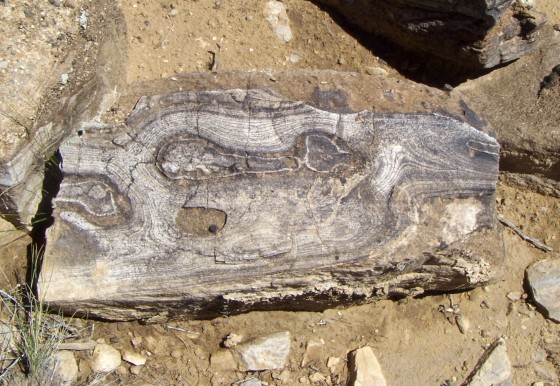 Okay, this doesn’t have much to do with anything, but Everett, having briefly come home for a visit,

Delmar, temporarily free from the toadal and/or froggy influences, has a message which hopefully will deter Gort from destroying the whirled:

are losing our footing on the spinning ball.  yes, we.  no, we.  i’ve lost it, and it’s temporary, but the sense of feeling the connexion(s) to everything and everyone else is tenuous, at best.

this facet of identification is, like many things, graphically illustrated by the good old sine wave.  troughs and peaks.  and i’d like to close this ride on the merrigoaround with a grab at the golden ring.  it’ll take some werk.

times like this i feel that the canvas is more real than the stuff we put on it.  my life as a sketch.  as a tapestry.  as a potter’s soon-to-be-discarded deformed flower pot.  the brief and fleeting melodic phrase, enmeshed in and felt and expressed, but evaporated minutes later.  oh, those darn haunting fleeting shreds of dissipating notes …

so it is with seemingly everything.  we would all be really very really smart if we remembered everything we learned.  mostly, i know that i once knew.  we are sliding into the seasonal furnace, the oven is on, we will broil, we will cope in whatever ways, relief at the breezes and rains and storm fronts but basically watch helplessly as the lawn yellows.  i hope i can find the time for frequent forays into the high country.

a week at a time, or so, that is how i leap-frog thru’ whatever it is i’m doing, or not, in this coalescence of space/time which, collectively, i think we all call “earth.”  my part of it, at least.  sometimes i feel my “body” is but a localized collection of particles intertwined with the associated energies serving as either a cage or a trap or the hermit-crab-shell for “my” consciousness.  i’m fairly sure it’s mine.  either that, or the sense of continuity is fairly convincing.  easily fooled.  can all of me be fooled all the time?  hope not.

i will probably never (until i figure out what doo-wah-diddy means) be ensconced in my perfect life, but if i make some headway in that sort of approach, i’d try to write more.  and also organize some of the things already and mostly written.  i could take all the hockey stories into a single somewhat long and hopefully not too boring story.  well, chapters.  the material is there, i’ve just gotta thread it together.

i could dive into “best frenz” a bunch more, as i often think of what seems to be fitting and appropriate (and, a good thing for me to pursue:  nice things to say about people, especially if i don’t happen to like whoever at present).  that is why i started and think i’m mostly finished with but hope i’ll remember more things to put into “sibling positives.”  that essay is/was an exercize and like reciting a litany, the (way)stations of the cross, meditating on calming the beast within, smoothing the ripples at the bottom of the pond.  yes, that will be more publicly-promulgated (well, i intend to, some day!) eventually.

the opposite of S P is a thinly-veiled fiction, sometimes called the QuickSandMemo (QSM), or could be called “why Sarah doesn’t like Justine.”  there might be more outrages i’ll either remember or will occur in the future.  there’s a place to plant those weeds …

and whatever else just happens.  pops up.  and if the worse does go all the weigh around and comes up on itself (worse comes to …) … groggily, it’s head throbbing, cursing the hangover, seeking absolution in forgettfullness and a deep sleep or perhaps even better, the plunge into the deep cool pulsating pool

ah, heck.  i could try to organize the many dozens of chapters of the BLORG.  or get an apprentice / secretary to do it, so i can go golf or something.

there should be a hockey outlet.  continued running, ruminating, regurgitating of life, rectifying the wrecked-um, and

gwadamagontching on the ganges.  think evile shaved-heads pony-tailed krishna-phreeks riding the whoarsez uv doom scattering the sacred brahmin cattle among the banks of the ganges.

and meeyoozick.  just gotta.  will and should we seriously hoard for the always-imminent but possibly-never-to-really-arrive apocalypse?  maybe we should collect as many of the end-of-the-whirled moovies as possible:  madmax, the postman, eli, omegaman, the road, the time masheen, i am legend, 28 daze, 29 daze, world flesh and the devil, some obscure new zealand last man on earth movie we rented along time ago, when worlds collide, and a dozen others i’ve mercifully forgot.  we should hoard a PA system and drums and stuff to continue the jam with.  ammunition.  (does THAT have an expiration date?)  gas generator.  a friend told me he doesn’t have to have guns or stuff ’cause he can FIX just about anything.  (like the short fellow in madmax/thunderdome who “has the knowin’ of many things.”)  ‘cept mike ain’t that short.  we’ll ramp up on the hoardin’ of cats.  won’t be too many mice in our junkyard!  did i mention gas?  oil?  i’ve envisioned driving around in as large as an RV as i can tolerate, pulling a trailer with the abbreviated hardware store within.

hoarding aside, i think i should un-hoard memories.  those knots of seemingly-associated recollections intertwined into what passes as my deepest innermost thoughts.  ‘cept they ain’t deep, and they’re innermost only ’cause i can’t retrieve them easily, it’s not ’cause i don’t want to, share, promulgate, express them.  ’cause there’s a thing or three there.  amusing stuff.  funny stuff.  coincidental things.  ‘the sacred and the profane’ standing on the stage side-by-sighed.  nobody’s watching, wonder why i can’t just slip between the seconds of time and