Below, not easy to discern, but an ARCH a few miles west of Glade Park.

A way a lone a last a loved a long the

Riverrun, past Eve and Adam’s, from swerve of shore to bend of bay 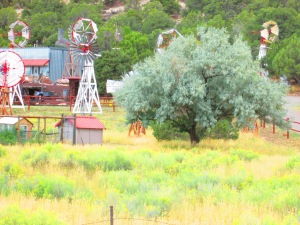 (the beginning/end/beginning-end of Finnegans Wake)

Above:  across from the ARCH, a magnificently wind-powered residence.

The wind-powered ranch, across the local highway from arch.  We drove through Glade Park on an early autumn day, all the way to Utah.

Better view of arch, but we couldn’t get any closer, as this feature is on private property, and … 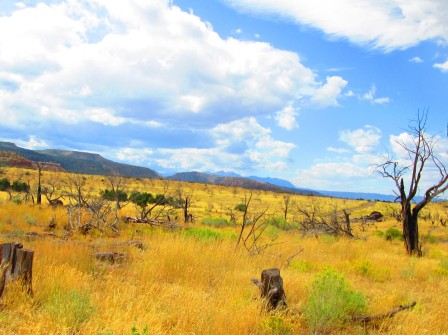 We arrive at the state line.  Drove past a few compounds which had the FLDS(?) vibe — LaSal Mountains in the distance.  We parked the truck as we had decided we were going to ride the bikes IN Utah. 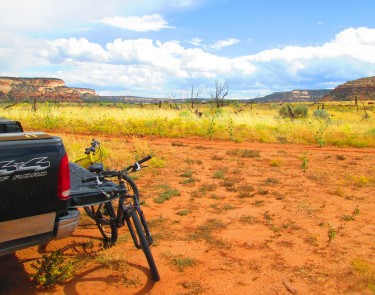 Of the Lord Creator a filial fearer, who, given the growing grass, took to the tall timber, slippery dick the springy healer, as we have seen, so we have heard, what we have received, that we have transmitted, thus we shall hope, this we shall pray till, in the search for love of knowledge through the comprehension of the unity of altruism through stupefaction, it may again how it may again, … the miracles, death and life are these.  (another selection from Finnegans Wake).

As (hopefully) you can tell, a magnificent early autumn day.  This is quite the remote state-line region, as I think you cannot continue on (easily) into Utah, but have to back-track through Colorado to “get anywhere.”  I expect there are some private landing strips …

Betty scans the distance.  We could see Interstate-70 perhaps 15 miles to the northwest.  Inaccessible from where we are, as the Colorado River is between us and I-70.

An old homestead cabin which we joked about purchasing, and fixing up.

1976?  It wasn’t 40 continuous years of reading, but I did start and quit a few times.  THIS TIME I exercised a little bit of discipline.  Yeah, I know, hard to berleave, me ‘n diss-slippery self-restraint.  However, having fallen into the slothful habit of computer solitaire right after the retirement commenced — I put my foot down (ha!  heh!) and made myself promise that I would NOT embark on spider-solitaire on a given day until after I had read at least 10 pages of FW.  The ploy worked — I averaged 10 – 12 pages a day, took only 4 months, and …

Jake, RockSea, and JaJa pause for a short break during a biking sojourn up above Escalante Rim a few weeks back.  Whew!  (Escal. Rim road climbs about 850′ in a bit more than a mile.  We rode/ran another couple of much easier miles up … pause, then back down).

More recent blurry autumnal aspens on The Mesa.  Below, “standard” view from the Mesa north rim — always bucolic and spectunkular !

Island Lake.  Hmm.  Someday we should take our canoe up there!  Maybe next year ~ 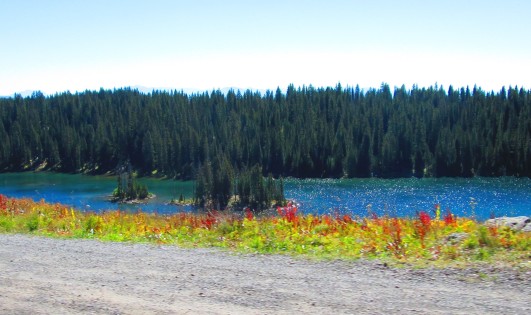 Walldough — keeping an eye on me as I recline, reading, on the couch.

Now I am going to tell you something.  I don’t know what heading it comes under, and whether or not it is relevant here, but it must be relevant at some point.  It is not anything new, but I would like to say it.

Even more recently, I claim that my mountain bike wanted to go to a hilltop south of town, and me ‘n the dawgz went along.  View to northeast, down to “our valley”. 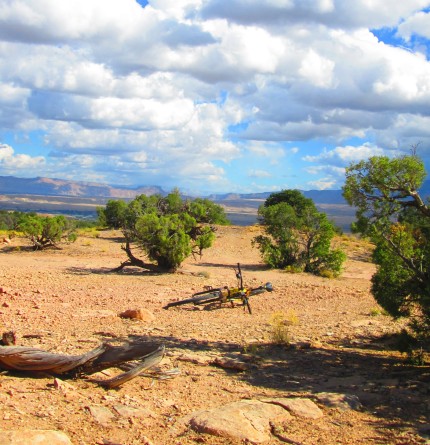 Looking south, southwest up the 9-Mile Hill Microwave tower on the horizon.

9 thoughts on “Between things. And not in-between anything”