I have been accused of not making much of an effort — at anything — more and more as time goes on. And I make little or no effort to go or do or be
anything/anywhere/anywhatever resembling
“the in crowd.”
“With it.”
Trendy.
Cutting edge.
Doing the popular thing. And so, I’ve been avoiding Moab.

Many people I know, and, literally, run (I use-ta ride) with, love “the Moab thing.” If there’s a trail-adventure-ultra run, or bike race, they’ll be there. These people would go there if nothing was going on, but the problem is — there’s ALWAYS something going on. 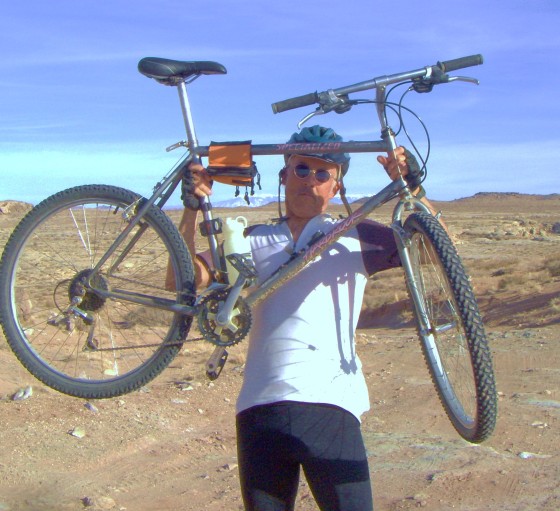 Above, Rosco ¿power-lifts? his clunker, in an attempt to frame the snow-covered mountains on the OTHER (east) side of Moab, about 35 miles away.

My family used to visit the area frequently. Never to mountain bike. And we never stayed in a motel, either. We’d always camp. Surrounded by Federal land (belonging to all of us, “we, the people”) we could and would pull off the road practically anywhere and pitch the tent. But we quit visiting about 18 or so years ago.

You might say Betty and I are down-home unpretentious desert people. (Okay, I’m possibly always pretending to be something, or somebody else, but I don’t think so). But Moab has changed. It’s not “Spanish” enough to be Santa Fe, but give it time — the next Georgia O’Keefe, and something to fill the cultural space which an opera would occupy. Moab may also want to be Sedona, and all it needs is for the power spots to be identified and for adherents to thereupon cultivate and congregate. 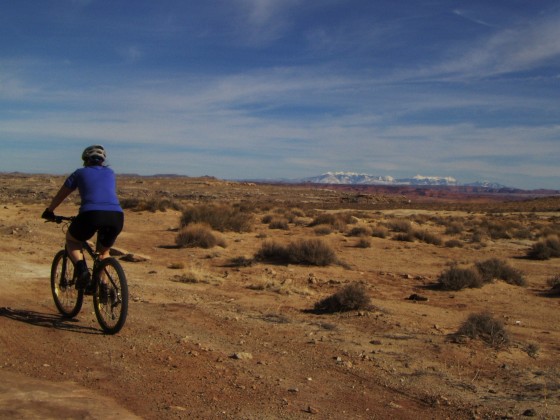 And so, wondering where to go for a short nearby weekend-away-from-home, we had considered three resort areas. Steamboat, where our son lives. Ouray, usually a quieter less-hectic place, but with the deserved reputation as a destination resort none-the-less. And, Moab. Then … 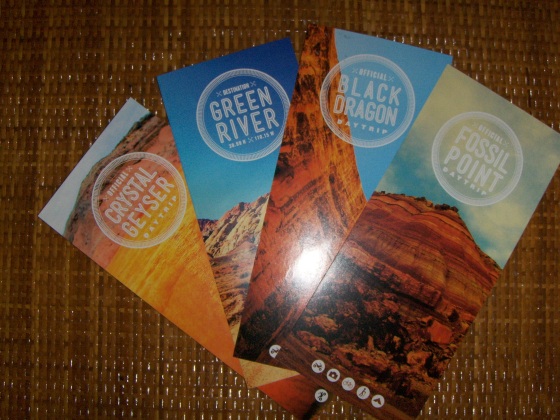 I considered, why not a Moab alternative? Green River, about 50 miles northwest and maybe not that many worlds-apart. It would definitely NOT be so “lycra-intensive” and upscale. We wouldn’t know if it was a viable option unless we went and investigated first-hand.

As you can tell from the brochures, above, there is some effort being made to bring in the tourist business. Green River ALREADY is a major “hot spot” for river rafters. The “River History Museum” is located here. Ray’s Tavern (one of two decent watering holes (with good eats) in town) has what may be the world’s pre-eminent collection of river-rafting tee-shirts displayed on its walls. If that’s not true, then one of the world’s most pre-eminent collections. Also, they proudly have some of Utah’s decent micro-brews on tap.

The Manti-LaSals — 35 or more miles southeast, as seen from Fossil Point

Betty and I had lunch and beer at Ray’s, checked into the motel, then drove south on the west side of the Green to explore and ride our bikes. Although scenic rides may not be easily accessible from your motel door, we drove 12-some miles, past …

Horse Bench Reservoir, parked the car, and down the sandy 4WD road to “Fossil Point.” We’re not technical mountain-bikers, and a two-track dirt/sand/rock road is challenging enough for us.

Dinner at the Tamarisk, deep sleep at the Comfort Inn, then drive 7 or so miles on the other side of the Green River (than on the day before) to the Crystal Geyser. No, we didn’t see it erupt. “It’s irregular.” 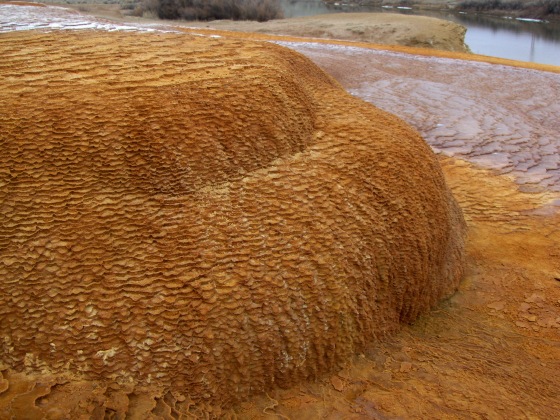 There is a magazine out of Moab, the Canyon Country Zephyr. Its motto used to be “clinging hopelessly to the past” — as the Editor, Jim Stiles, lamented bygone times — when his town was not so famous. He wrote that when he first arrived, “Moab was in the cocktail hour of the late 1970’s, still reeling from the collapse of the uranium industry and not yet gearing-up for what it would become.”

Recently, it seems he (and co-Editor, Tonya) is changing his tune. Moab residents of the 1950’s resented the influx of uranium miners, and the town’s subsequent rapid growth. The inevitability of change.

In the early 1990’s I made the acquaintance of two former uranium miners — Robin and Bill Groff, who started the area’s first bike store. Oh, what entrepreneurs and pioneers …

During my periodic pilgrimages to town (usually to run the annual spring Half-Marathon (or 5-mile)) I’d always stop in their store. I coveted a racing bike up on display. It was way over my price range but the Groffs and I would jokingly banter, and barter. I had been coming in the store for a couple years when they said that the next time I dropped by, they would sell me the bike, no matter what.

I passed through town a couple months later and horrifyingly discovered that the shop had burned down the day before. “My bike” was among the casualties. Bill and Robin were philosophical, lamenting some, resolving to re-build right away. Obviously, I didn’t acquire the bike. 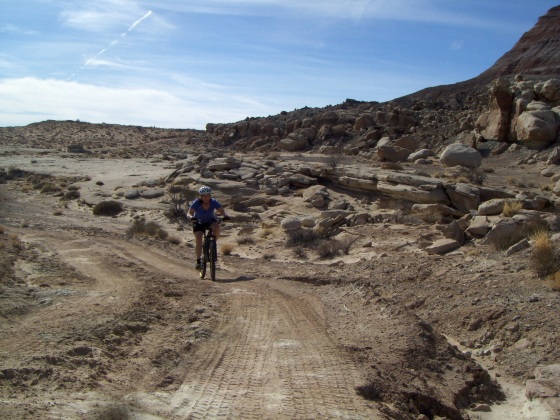