Last weekend I visited Carson Lake, at the top of the Kannah Creek drainage off the Grand Mesa (west Colorado). Weird, from my house I look out at the general vista encompassing the Lake practically every day and this was my first actual visit. 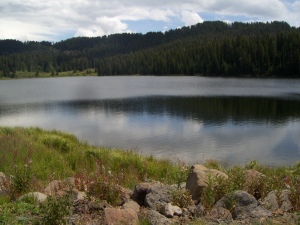 I was the guest of Ann and Lynn Ensley. I knew Lynn was the consummate fisherman, but was impressed at his familiarity and knowledge of “living off the land” type ethic. Not only did he catch each of us a sizeable fish for lunch, he also knew which mushrooms (and other fungi) we could eat and not die in so doing. I had a couple dozen wild raspberries for desert. I joked that Ann had snuck up on some corn plants and snared us each an ear. The corn and fish were roasted in the coals of a lake-side campfire.

These two reddish ‘shrooms were each almost a foot in diameter, but Lynn did not recommend them, unless one wanted to experiment with a combination near-death and/or hallucinogenic experience.

While the Ensleys were enjoying the Lake, I hiked down a trail with RockSea and Sleven, my dogs. About a mile down there was a tent pitched smack-dab in perhaps the only campable level section of the rocky narrow route. When I later turned around and came back, I had an enjoyable sit-down conversation with Nick, Michelle, and Noodle — who, being a Louisiana Katahoolie (?) swamp dog, preferred playing with Sleven.

The night before, they got caught in a hellacious downpour and realized they had but minutes to set up camp. I could easily picture their predicament, as the previous day I was temporarily stranded on the Interstate due to a flood which caused a massive mudslide. The same concentrated downpour doubtless swept in a line from where we were on this trail, to the Interstate a dozen or so miles to the north.

Lynn picked and nibbled on a piece off of this feathery filigree yellow … I don’t think one can call this a “mushroom” — but what it is: a fungus. I decided that I’d eat a piece too, trusting that if Lynn didn’t die, I probably wouldn’t. Like the consummate gourmet, he announced that at first we’d taste a trace of bitterness, followed by a slight garlic taste, with a faintly strawberry finish. Darned if I didn’t detect the same order of tastes.

Yes, those reddish objects are “hat-sized.”

While Lynn became the trout-whisperer, and Ann the campfire-maker and corn-stalker, the dogs of the forest and I slowly wandered the slopes of the Mesa.

Lynn and Ann agreed that this day was just about THE PEAK of Mushroom-hunting season. I don’t know the species, nor genuses, nor whatever, but we must have seen well over a dozen different types, and bucket-loads to haul home, if we were so inclined. And if the bounty was safe to eat…

I joked that some of these looked like extraterrestrial outposts.

Betty recently had our house painted! This is not at all related to anything else on the rest of this post.

Though they’re restrained much of the time when in town, we try to give the dogs ample leash-less time out and about. 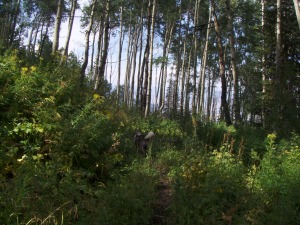 I don’t know if these are safe or not, but Lynn and Ann did stop and look for “oyster mushrooms” (I think) as a year or two before they had gathered “bushel-baskets” of them. Finding none in their usual spot, Lynn opined that we may have missed the peak by a day or so. If somehow we could stop by tomorrow … 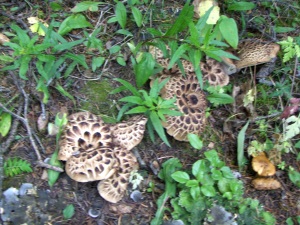 THIS JUST IN: a day or two after I posted this, Betty returned from Portlandia, having visited LonelyDino.com at the satyrday marquet, and purchased this shirt. How topical, eh?