Betty and I, and the dawgz, are driving to Nucla (Colorawdough) in early February.  This particular February was like some sort of convoluted Indian summer, in that this was Neolithic or Neanderthal or Anasazi,

Anasazi Spring, a blast from definitely different times, a transmogriculocated sphlorg of time/space continuum from an adjacent dimension, inserted (however briefly) into the dead (if not dying) of west Colorawdough High Desert Winter.

We motor up and out of the Grand Valley, south, then west, up Highway one-forty-one, through Unaweep Canyon.  We are going to participate in the Nucla Resolution Run 5k, a fund-raiser for the local (west Montrose County) animal rescue facility, Hoof and Paw.

Past Unaweep Canyawn, joking about needing “only” $400 minimum to stay a night at Gateway Canyons Resort, (& seriously, now) were almost overwhelmed by Dolores Canyon Scenery, 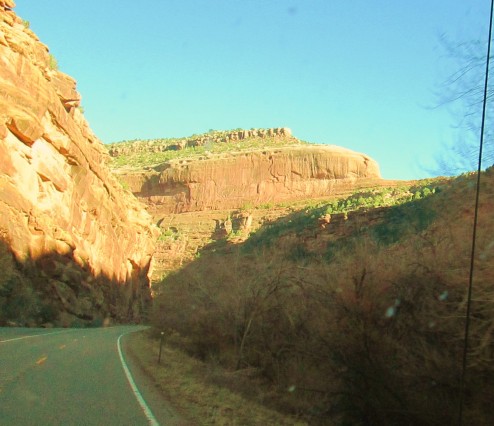 speculated about the Twilight-Zone-vibe of the Uravan area, thought we mistakenly took a turn to AREA FIFTY-TWO and finally arrived in downtown Nucla.

Regretfully, this is the only photo I/we have of “downtown” Nucla.  Georgia (left) and Roxie look at the soon-to-be-almost-crowd assembling for the 5k run.  (The crowd was small, but enthusiastic).

Nucla is not on the way to anywhere and THAT’s a Good thing !

And if that wasn’t wierd enough, it’s equally easy to intuit that we’re on the way to Area 52.

It really is. The center, that is. Nucla is that rare town which is, as mentioned earlier, NOT “on the way” to anywhere else. You HAVE TO actually be going to it — but the town is about 4 miles off of a State Highway (CSH #141). CSH 141 takes people towards places you have heard of — Telluride, for instance. Well, most the way to Telluride.  (You’ve heard of Telluride, right?)

Betty planned on riding her bike while I entered the run with the two dogs.  The Race Official tried to cajole her into being the “pace bicycle” but, instead, (no, she was not distracted by pygmy inukshux lurking just off the course) she accompanied a five-year-old on his single-speed bike who was having just a little bit of trouble on the course’s challenging uphills.

Rewinding, (de)riving/driving back home, Unaweep Canyon — but not until after Betty acquired a bit of useful information … there is an affordable Restaurant at Gateway Canyons Resort — but one has to hunt a bit through the facility to find it.  “Just follow the locals” — a Gateway security guard told her. 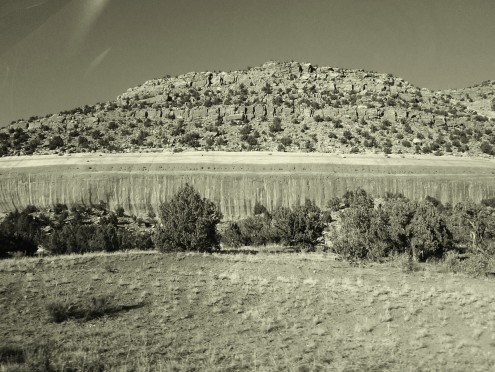 Most of west Colorawdough has experienced the warmest (and probably dri-est) January in many years. Some places are reporting that January was the warmest, ever (well, it probably was warmer when velociraptors and pteranodons roamed our area, but ….)

The Race Director comments: This was our 5th year for the Nucla Resolution 5K race and usually the first event of the year. Very cool soft twill caps and water bottles for swag this year. Dogs on leashes are encouraged as it’s a fund raiser for our local animal rescue organization.

(Rosco adds): CONSIDER ATTENDING THIS FINE INTERESTING NOT-TOO-TOO-FAR-AWAY EVENT NEXT YEAR! I’m glad I did!  I’m serious, folks. My wife and I (she brought her bike so she could ride the course and area while I participated) really enjoyed the unseasonably spring-like weather on the drive there and back. I decided to do something really strange, even for me, and ran with TWO DOGS ON SEPARATE LEASHES. Yes, the thought occurred that we could encounter two squirrels running across the road in opposite directions and my arms would get torn off. Fortunately that didn’t happen. Surprizingly, the dogs were pretty well-behaved and if it wasn’t for some guy who ran relatively fast with his dog (23-some) I/we would have contended for the DOG FIRST PLACE prize.

Yes, I/we missed the Dog 1st Place Frisbies.  We’ll try for THAT again, next year.  (Hopefully no-one will notice if I wear skates).