Doggzeneye ventured up past the (“Indiana Betunada & the Wombat CowSkull Shrine”), or whatever it is.  We ventured further/furthur than weave ever weaved, uh, wander/endured before.  I imbibed in a substance which (so I think) facilitates removal of filters which impede Nagual perception.  Fortunately (?) this condition didn’t last long, and I un-evolved back to what passes for normal.

Brilliant day — the unseasonably warm continues (our town broke the record for the date by one-degree.  I think it was 78 (f) or so, but fortunately NOT up where doggzeneye were).  The occasional cloud passing over the sun resulted in an immediate refreshing drop in temperature.  The north slopes during the last mile or so of our trek had snow-bank remnants, so the dogs would cool off and hydrate.  Below, The Mesa on the horizon, with the road up to the 9-Mile Hill Microwave Tower ziggin’ lower right up and left. 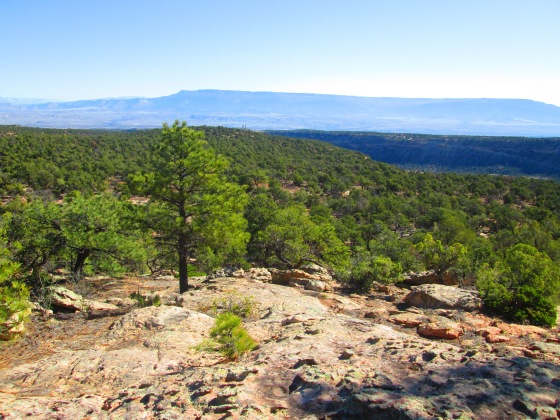 Jaja and Rocksea are, of course, Dogs of the Forest.  And I hadn’t been up close and personal with Ponderosa Pines in a while.  These are not real giants, yet.  Still, I have a sense of awe because in our local forests they are, to me, like royalty.  Queens and Kings of the Forest.

The view below is to the west, with mountains (still snow on them) in the Dominguez Wilderness Area.  I call the place I’m in the Olivivas Wilderness Area — as there are no roads, no way for motor vehicles of any sort to intrude — and one is pretty much guaranteed genuine wild-ness.  We hike up the ridge north of Unaweep Canyon.

I had forgotten how far I hiked a couple or so years back, trekking through mini-blizzards and worried that I’d run out of light when I encountered the Wombat Cow-Skull clearing.

The ‘wombat’ was still identifiable as a wombat, while the skull and bones assemblage begs a question, or three.

A little further, another clearing with Hormiga-Henge.

We gained 1700 feet of elevation from the Unaweep Canyon valley floor — and though a bit hazy, the majestic San Juans shimmer.  Telluride is on the other side.  These peaks are perhaps 80 miles away.

Jaja peers  as we take a break at the turn-around point.  We are above (due north, and up, of course) from an area locals know as “the Copper Mines.”  You can make out the San Juans, but also snow on the mountains on the right horizon — the high point of the Uncompahgre Plateau. 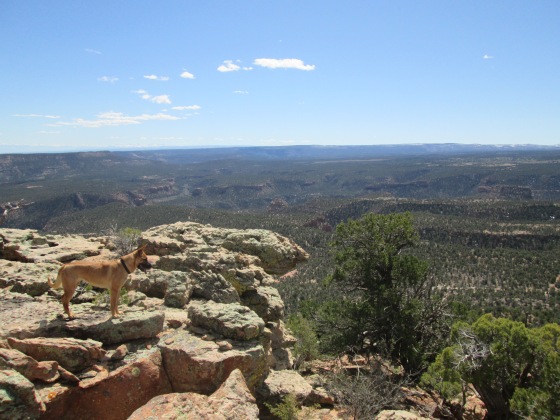 Not my best by any means, but this inuksuit is the first I made while barefoot.  My rarely-used hiking boots were killing my feet! 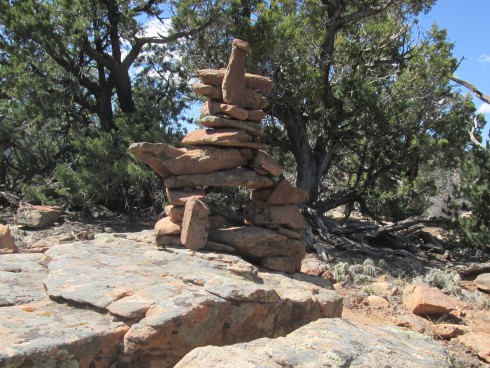 Sometimes the rocks ask to be assembled.   The triangular base, below, was sticking upright so I just accessorized it a little.  No, I did NOT intend any phallic-ness.

Typical edge of the uplift/cliff view.  Hazy in the distance …

Zoomin’ in on the San Juans.  The town of Ouray is nestled in the middle, at the base of the peaks. 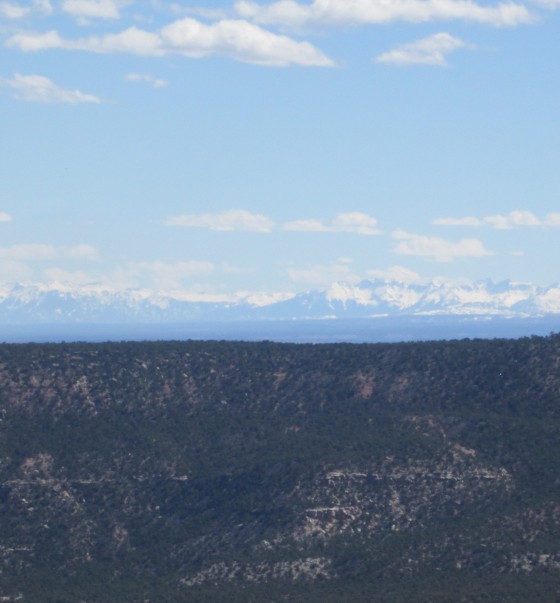 Below, I would betcha that there are Anazazi signs to be found …

I’ve zoomed in on the left (north) shoulder — past the shoulder — of The Mesa.  Is that an intentional “controlled” burn — or an accident?  The night before, driving home, I saw another forest fire — well, not the fire, but the tell-tale smoke which can easily be distinguished from clouds.  If we don’t get a lot more moisture, this could be yet another bad fire year … 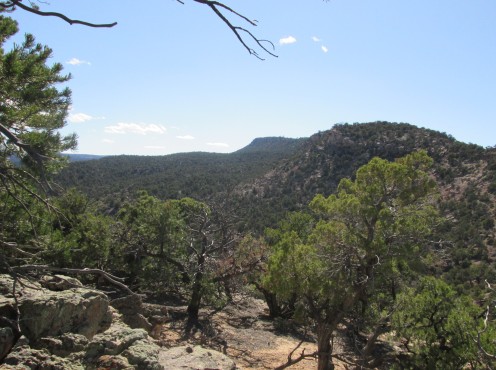 We are most the way back to the car, and I turn for another look at the high point in the distance, which was where we hiked to.  Whew!