“Huh, wha — ?!” I not-so-articulated.  One of the dogs had barked, puncturing our velvet-all-encompassing midnight slumber.  I sat up.  In the almost-total darkness I reverted to habit, focusing on listening.

The dogs were bristling,  tense, ready to spring outside.  Betty and I shuffled to the nearest door, poised to exit.  The crunching sounds continued.  I slowly unpinned the latch and we went outside.  In the moonless heavily-shadowed garden just outside, we saw large round shapes as the crunching stopped.  In the dark, objects can easily seem much larger than they are, and after a few stupified cognizingly-deficit moments, the shapes ambled off.  It seemed that whatever they were, they were not necessarily frightened, but annoyed that we intruded.  Raccoons.  Whiny semi-threatening bleeps and blurts of snarls as they scurried off.

Wisely not letting our dogs out, as whatever chase would ensue probably would entail, among other things, many frenzied minutes of us having to go out after them and the inconvenience of retrieval — B ‘n me donned headlights and surveyed the premises.  I encountered two smaller raccoons around the upper corner of the house, and they, too, shuffled off into the shadows.  My headlight revealed many crushed and shattered snail-shells.  The ‘coons had been feasting, an escargot buffet, ferreting out their hors-d-oeuvre along the sides of our house.

Okay, for an explanation muchly simplified (or, basically, I don’t want to regale the whole boring story here), our property has a surfeit of snails.  I transplanted a mere dozen ELEVEN years ago from my parent’s home, and the transplanmogrification has been successful beyond all my expectations, almost to equalling whatever wildest dreams I might have ever indulged in about such a thing.  So, I (and we) was (were) not surprized.  Raccoons are enterprising creatures, and it was no surprise that the neighborhood gang of mapaches had not done this earlier, and frequentier. 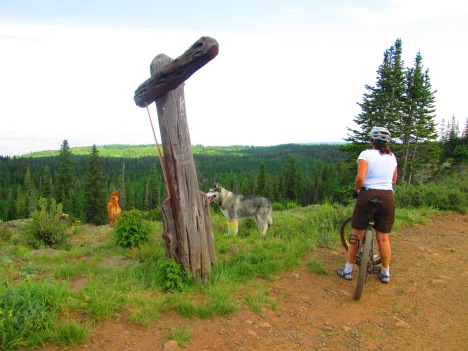 A few weeks back, Betty and Rocksea and JaJa survey the hazy Plateau Valley below Powderhorn look-out point.  We had just surveyed a Mesa-top waterfall, not far from Land’s End.  I couldn’t simultaneously hang on to the rock and look down AND snap a photo, so alternatively hung-on and aimed blindly as best I could.  Many dozens of feet down … 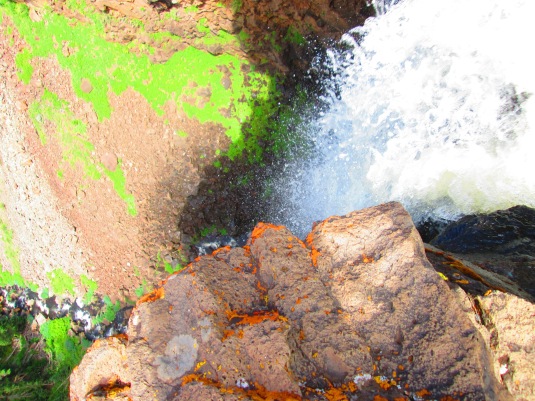 Seems we added a couple etherial columns to support our porch ~ or, perhaps Reign-bows just before the annual summer forest-fire haze. 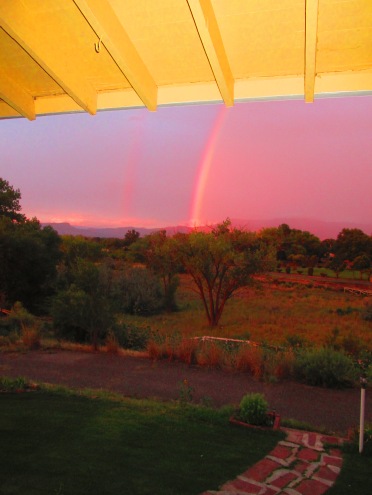 I drive up through the Monument to the other side, where the dorgzeneye did a run up Black Ridge Road ~

Sunrise (through the forest-fire haze), and 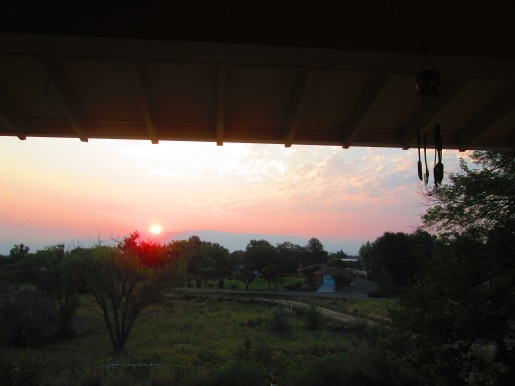 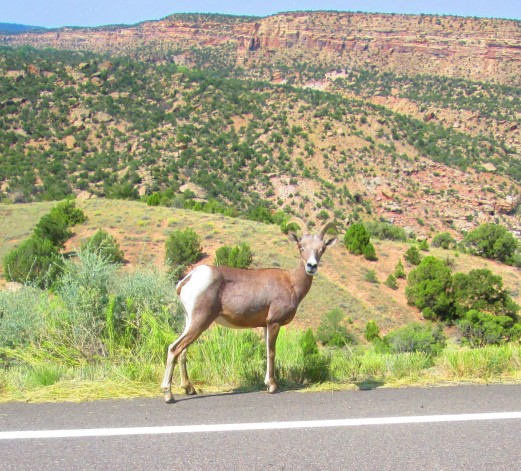 Mickey has changed his name to Mikki Ninaj.  Milli and Jaja curl up by the periodically-unaccessible drinking hole …

While our lady cats, Alice and Annie, lounge between the window well and the firewood. 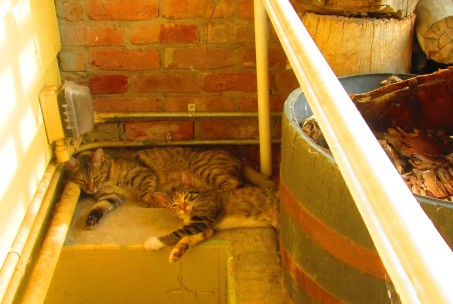 25 thoughts on “Snail Carnage by Raccoon”