A few weeks back, being the start of Hanukkah, Betty decided we should do our version of the seasonal ritual known to many as the “cutting of the Christmas tree”.  Except we cut off a branch or two which the tree(s) won’t miss, and once assembled back home is considered the “Hanukkah Bush.” 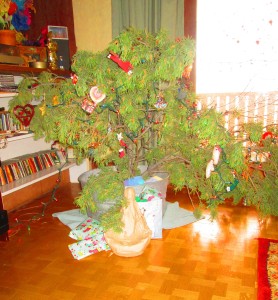 We drove to an area we call “Zombie Road” (don’t ask) and scouted for pinyon trees from which we could ‘harvest’ a few branches.  As you can tell, we really out-did ourselves this year.  We’ve had awkward un-gainly, off-balance, mis-shapen finished? products before, but …

And Betty didn’t care.  It was the ritual, the symbolism, which/that mattered.  And standing back to reflect on the thing of beauty we (mostly she) created, I said

“We have done everyone else a favor.” 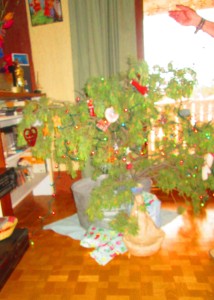 Many people might feel that their Christmas tree isn’t as pretty as it could be, or as large, or as perfectly-shaped — and when they see ours, they will not feel so bad.  As I told Betty —

Eddy and Henry (our 4- and 2-year-old grandchildren) will be by in a few daze.  They probably will feel so over-whelmed (actually, under-whelmed is more likely) by our house in general that they won’t particularly notice the tree, uh, ahem, bush.  And when they do notice it, it still might not stand out in the over-all scheme of entropy and chaos our place will be perceived to be. 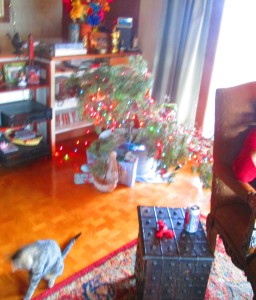 down the road they will go to a friend’s, or other relative’s house during the Holidaze.  Said relative or friend might apologize that their tree is not pretty, nor especially wonderful.

“Your tree isn’t so bad.  Sadie and Papa Fred had one which was really awful!” they might respond.

Years later, Eddie and Henry may continue to offer strong re-assurances that no matter how un-spectacular a host’s Christmas tree (and in rare cases, the Hanukkah bush) is — that they personally have seen far worse.

“Our bush this year is a very good example of what could be called the Low-End Calibration Standard,” I told Betty.  I once had a job involving characterization of calibration standards, so I know a thing or two about that.  And, wouldn’t you agree? that we definitely have a case, that our 2015 Hanukkah Bush could be considered THE L.E.C.S.

9 thoughts on “We’re doing EVERYONE a Favor !”