We’ll get to the “luvs this” — but last weekend the unlikely duo of Walter and Bruce were, well, just hangin’.

Dee ‘n me had a friend passin’ thru.  He’s of Anglo ethnocentricity, but identifies heavily with Western Hemisphere aboriginal.  He posited that perhaps these two entities shared a bond way beyond the obvious.  Mates (as in Crocodile Dundee, mate) in passed life times?  Kindred spirits, none-the-less, it certainly seems. 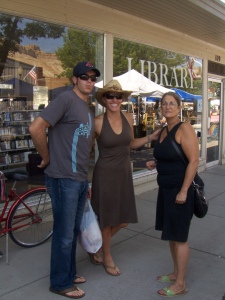 Betty and her son, and his best friend pose on the sidewalk in downtown Palisade, also last weekend.

Beauty.  And the beast.

Today (early this passed evening) the dorgzeneye (thassaKollektive) went to the Horse Mountain 36-Road trail head.  Although within 20 miles of our house, this was our first time there.  YOU KNOW how things look in veiled, filtered, indirect light.  This was EAST Orchard Mesa, the Palisade side of the area.  “Ah luvs thisshit” ah sed tew meeself. 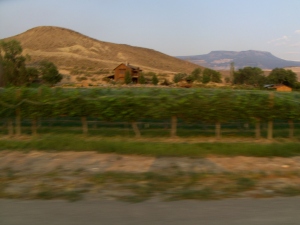 We’re nearing the trailhead, down a last lane thru’ the orchards. 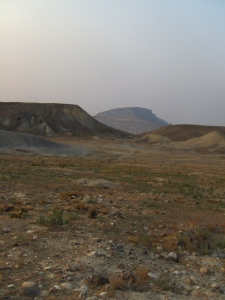 The eastern Grand Valley anchor of the Bookcliffs.  The Bookcliffs are the north boundary of the Valley but we’re hiking south, into the Horse Mountain area.

THAT’s Mount Garfield, the pre-eminent landmark to the north of the Valley, just outside of Palisade.  Things are hazy (the light is muted) ’cause of forest fires in the states to the west of us.  Usually the aspect would be direct, unrelenting, soul-sucking, sunlight.

We wander further south, and Garfield recedes — not only with distance, but with haze.  I think the haze and other not-so-obvious influences enable extradimensional portals to, ever so slightly perhaps, exert influences, gradually at first …

DON’T step in the ooombah!

Appealing, iddn’t it?  I definitely plan on comin’ back, mebbe with a mountain bike, or, heck, run as far as I can (when it’s cooler!).  View is to the south, southeast — with “the world’s largest (and highest?) flat-topped mountain” — the Grand Mesa (10,000 ft. high) on the horizon.

As the sun sinks into the haze …

NOTHING says End-of-the-Whirled Apocalyptic Doom like a Black Dawg on a bleak high-desert cactus/land-scape with the Red Sun of Futility overhead.  Seriously, a coyote was yelling at us.  I (gu)estimate ‘yote was about 200 yards away.  To their credit, the dawgs did not give chase… 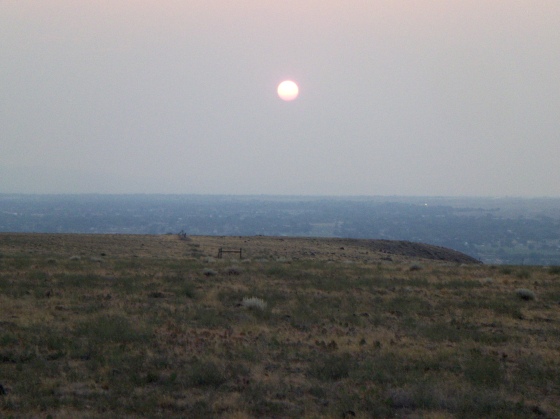