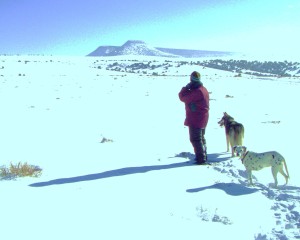 I’ve rarely dwelled on this, much, but … I do, indeed, live in a location which is just about as optimal as can be. Granted, I don’t live in an alpine setting, where majestic granite-faced peaks are the vista du jour. Hillsides covered lushly with a pine mantle, the four distinct seasons coloring the background (uh, desktop) of my life with distinct palettes every few months. I don’t look out at the Himalayas, where I suspect such grandeur would gradually become … mundane. Typical. Nor do I gaze out at the changing cloud composition and hues over the ocean. Good thing I don’t live in places all-too-easy to make fun of. Granted, during my three-month sojourn in the middull of Texas, the sunsets often were amazing. The sky there went from the flat distant earth’s-edge-line up and up to higher than possible anywhere else. Filled with clouds, of all colors. 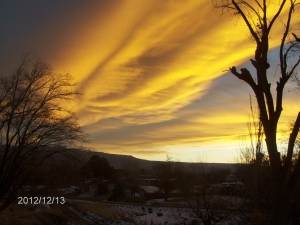 No — I live in the wide valley of the Colorawdough River, coursing onwards and soon to be enmeshed into the world-famous Utah Canyonlands — hints of which locally are tantalizing enough in that they are just that. Hints. No, no all-encompassing horizon-to-horizon sweeping slick red canyon-walls and spires comprising the blank pages upon which my life, such as it is, is written. It’s better than that.

There are hints, glimpses, direct gazes into several distinct and different possibilities. All to easy to focus and direct one’s attention down-river. That is always there.

Yet — look to the east, at the towering 3500-meter flat-topped Grand Mesa (Llano Alturo in my alter-ego life). One can gauge the seasons, measure beyond what encompasses us in the valley below. One year I sat in our hot tub in July, sipping a beer reading a book and periodically gauging the still-obvious snow-line near the Mesa’s rim. There are bands of aspen and other deciduousness which, like a thermometer, measure the autumnal advance.

Turn one’s visage to the north at the Book Cliffs (so named because they allegedly reminded earlier travelers of the contents of a book-shelf). A good photographer can take a remarkable award-winning shot each day — of the play of lighting, the shrouds of fog and mist clinging to the sides and top some days, the pronounced snow line which melts almost upon contact with the light of the sun. The shadows play, too — all the more amazing when you consider that nothing is revealed in the cloudless scorching heavy mid-day sun. The Bookcliffs can become the calibration standard of bland. And yet, in the waning day’s diminishing light, or the opposite, the mood changes almost by the minute. 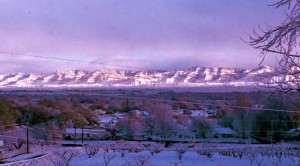 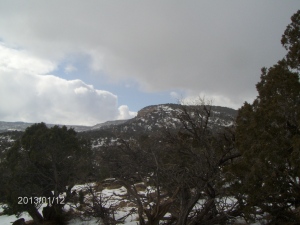 Gaze southerly, at the Uncompahgre uplift, hundreds upon hundreds of square miles of thick forests and meadows and high-desert canyons mostly unchanged since the European invasion. I go and park on highway shoulders and get out and just wander. There is one area in particular, unmarked on any map, no roads nor easy egress whatsoever, I squirm up a scree slope and free climb just a short stretch (only have to lift the less-athletic dogs once) and I’m in the Olivivas Wilderness. One day while so sojourning, I was disappointed to come upon three or four small pieces of litter. 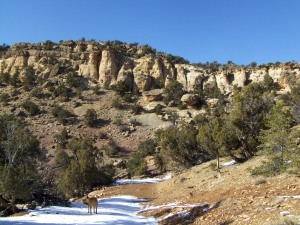 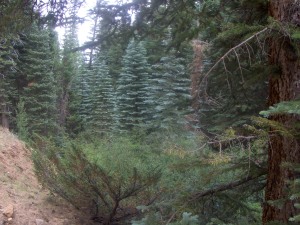 And … to the west is the Monument. A monument unto itself, probably soon to become a Nashunull Park, a sort of advance hint of the vast Utah Canyonland red-rock (and green- and yellow- and gray- and orange- and brown-rock) spires, hoodoos, sheer river-carved movie-screen walls, badlands, and much-coveted raft-trip camping areas. Ah, yes, the Monument. The high points of which approach 7,000 feet — high enough to be a viable companion foothill to any of Colorawdough’s grandest peaks, yet merely the edge of the northern rim of the Uncompahgre. The sunlight does quite a show with the Monument’s walls as well. A marvel at sunrise. Muted at sunset, where one’s attention turns either to the Bookcliffs or the Mesa, as the sun at one’s back makes looking down-sun, more … inevitable. Easier.

And what I haven’t mentioned is that from most places in the “Grand Valley” (the generic and general name for this area) one can’t see the San Juan Mountains to the southeast. If I could ascend a ladder maybe 100 or 150 feet up from my house, I’d see them. On a clear day, one can easily see 100-plus miles. With clarity. The shimmering snowfields. (You can see the SJ Mtns from the airport, if it ain’t too cloudy/smoky/dusty/inverted/smoggy — as the airport is north and UP from town). But I know they’re there. They are another clime and aspect quite lacking in the localized environs, but we have a main-line, as it were, directly there.

The only thing we don’t have is the beach. And that will come, when the armageddonic cataclysmic apocalyptic Beast wanders the earth. That event won’t affect the Grand Valley much, except that the ocean will roll right in, and Grand Junction will be a seaport. Can’t wait… 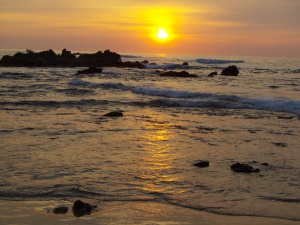