The Inuk-Thingy-by-the-Mailbox fell down this past weekend. I mentioned the inevitability of this to Betty a couple months ago. Originally constructed in an upright aspect, it had been leaning. Gradually. A little bit more noticable with each passing week. I determined that the foot-bases were sinking, like the Tower-of-You-Know-Where, and it was just a matter of time before the whole thing collapsed.
And, I told Betty, I wouldn’t re-build nor attempt to stabilize until AFTER the fall-down-go-boomulated.

“What?” says the kitten. “I had nothing to do with this. It fell over as I was walking by.”

“Hey! I would have knocked it over, but I’m chained up!”

I waited for the heat of the day to mostly abate, and for the accumulated beers to not only hydrate, but sedate. Oh, and gather some shimming material, the wagon, and other tools of the Inuk-Building Trade. 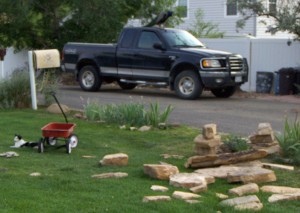 So, we start with the legs. This is a very important aspect of the eventual Inuk-Thingy. Of course! (Note the unconcerned Milli-cat, left). 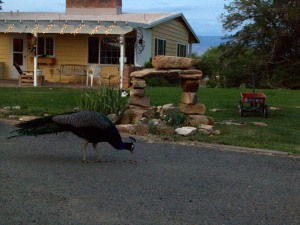 We place what is usually the most important, and fickle, piece-de-resistance, the main body. I needed Betty to assist with the levitation of this. Whew. Then the balancing and serious shimming really begins… (and the peacock could care less).

We are mostly there. Build a bit higher, head, neck, and shoulder stuff, and … okay, you ask, what is this “shimming”? I gently ‘rock’ an upper piece of the structure and see where, lower in the work-in-progress, one rock-piece opens up, or bends, daylight, someplace where I gotta insert a small piece of material which, so to speak, ‘dampens’ the rockability. We want little or NO movement whatsoever when the wind blows.

Ah, it’s dark and we’re done. Not as tall and bulky as the prior incarnation, but let’s hope this lasts. Well, NOTHING LASTS forever, but endures for whatever constitutes “a long time.” I’d like to think these things are like The Dude, you know? They abide.

Betty poses with the beast. It’s taller than her. She likes these things — I don’t know why.

Dawn of The next day, a new day. We see the ‘original’ yard inuk, in the distance.

A semblance of quasi-normalcy (we NEVER have ‘real’ nor normal normalcy, “quasi” is as close as we ever get) — Betty loading her bike for our latest bike misadventure.

(spoiler alert: I might follow-up on our Green River (alternative Moab) exclusive with a foray to Gateway (Colorawdough). The fun and intrigue and weirdness never ends!)

4 thoughts on “Death! & resurrection of an Inunnguaq (or “inuk-thingy”)”