(okay, I don’t have any pixures of a cat in a tree.  this’ll hafta do)

It is not every morning when walking through my neighborhood I am approached by a neighbor in a threatening manner, gun in hand.

Granted, it was just before sunrise, and I was acting suspiciously on his property.  Actually, it was both Betty and I at the base of a tall cottonwood tree, trying to figure out how to talk our cat into climbing down.

I let Wall-dough outside five days before (Thursday) as I left for work.  I figured since it was light out, this minimized the likelihood of nocturnal predator encounters.  Though for small domestic animals in our area, the threat of becoming lunch is never miniscule.

Waldo would invariably scamper to the house front door when I arrived home later in the day, glad to be let back inside.

Not so on Thursday.  I was worried as soon as I stopped the car, and he was not immediately running to the house.  I called for him and walked around the property.  Darn.  “Coyote lunch” was (in my mind) fairly likely.  Darn ‘yotes were mostly nocturnal, but I had seen one on my property at 8:30 a.m. a few weeks prior.  And it didn’t matter what time of day it was further out in the desert, I would encounter them often enough that it wasn’t unusual.

I walked around at night, head-lamp shining, calling as I patrolled our property.  He could be stuck somewhere, and I paused to listen after each calling of “kitty kitty kitty.”  A couple times I thought I heard a response toward the north part of the property, but found nothing.

The initial sharp sadness of loss slowly subsided into the ocean of dull ache I feel towards and about things in general.

Tuesday morning I was bustling, or rather, bumbling around the house through my pre-work chores and rituals.  I was aware of the bright flare of Venus above where the sun would rise later, and that the waning moon-crescent had been approaching ever closer the past few days.  I went out on the balcony to attempt some photographs.

I was fairly sure I heard a faint “Meaoow, meow, meow … ” down and north of our house.  As fast as possible, I pulled on a coat and slippers and went outside to investigate.  It could be Walldough, but if not, there was a precedent.  Years before I found two small kittens on the canal-road — one was hiding in a tree.  The tree-kitty became mine, exclusively, a revered dignified presence in our house for a few years.  The other is still my daughter’s cat.

So, it was kind of precognitive, that I might encounter another cat/kitten to fill the void of our recent departure — or instead, possibly we’d find our lost kitty.

I shuffled down the hill and across some patches of ice and snow and the canal to the property on the other side.  Yes, I could clearly hear a cat calling … and after a couple minutes located the source up in a big cottonwood tree.  Could I talk or cajole the thing down out of its lofty perch? 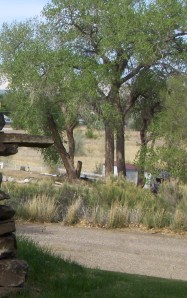 Two people with arms wrapped around the trunk probably wouldn’t have touched the other’s fingers.  The trunk shot upright for about 25 feet before the first branches.  I could discern the cat up above the branch.  The residents of this property resided in two houses about 50 yards away and I thought that perhaps they weren’t home.  This was a relieving thought — that I could attempt whatever retrieval without bothering them.  Besides, though whoever it was had lived there for years, I had never met them.  (I was on friendly terms with the original occupant, who had passed away almost ten years ago).

I saw where a few ‘orchard’ ladders were stored nearby, and positioned one up the trunk.  I climbed more than halfway up, hoping that the plaintively-meowing presumably very-hungry-thirsty-cold creature would make some effort to meet me half-way.  Not to happen.  By this time it was beginning to get light enough so that I could tell that it certainly seemed to be a gray cat, about the right size, to be ours.  After a few minutes of “here kitty kitty kitty” balancing on the ladder, I went back to the house.  I would tell Betty about this, and if we couldn’t get the cat soon, then she would know where it was as we conjured up plan B.  Besides, I really should get to work sometime today.

She accompanied me back down across the ditch to the base of the tree.  As we were alternating cajoling (“come down! kitty-kitty-kitty”), hoping that it would come back down, as, after all, it had (presumably) gotten up there on it’s own accord, and discussing what other method of retrieval might work, we heard a slam of a door and some shouting from the nearest house.

A stocky grey-haired bare-chested fellow was striding rapidly our way, his right hand brandishing a big pistol.  “What the hell are you doing on my property?!” and though we tried to explain we were trying to retrieve our lost cat from his tree — he single-mindedly proclaimed that “why didn’t you ask permission first” to be there.

A few more sentences and exchanges.  Betty takes a dim view of encounters like this and began walking away to go home.  I realized I should leave the property, walk around it and come to the front door of his house to “officially” knock on the door and ask permission.

A few minutes later, having detoured around to the driveway and back to the other side of the house from the cat-tree, I knocked on the door.  The fellow opened the door, sans-gun (I took that to be a good sign) — and I apologized for bothering him and trespassing.  We introduced ourselves, I can now call him “Jim” and strangely enough, he already knew my name.  His invalid wife (who I have yet to see or (re)encounter) had worked with me about 20 years before at a prior job!  Jim mentioned that when he came back to his house, still fuming, his wife asked if “those people” were from the house up the hill.  Somehow she knew I lived there, a former work-mate.  Hmmm.

Before I could mention that I would like to continue attempts at cat-retrieval, Jim had come up with a plan.  He would fire up his front-end bucket-loader 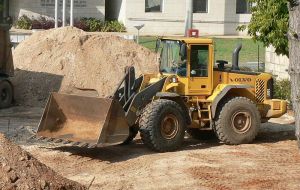 and I would be in the bucket as he lifted it up, and then I would climb up a ladder from there.  I did my darned-est not to have my eyeballs roll out of their sockets … had he ever done this before?  And nobody died?  Again, picture a front-end bucket-loader, the bucket up as high as it can, with a person climbing a ladder from the bucket.  He said that we’d do this “as soon as it warmed up.”

I went back to the house to tell Betty of the latest developments.  I also called my boss to inform him I’d be late to work.  Things must have warmed up enough within minutes, as I heard Jim’s front-end bucket-loader engine running, and he was positioning it at the base of the tree.

Fortunately there are no pictures of me standing unsteadily in the semi-circular cold steel bucket, trying to position a ladder further up the tree.  I looked down and wondered how injured I could easily become.  People at OSHA dream about stuff like this.  Climbing more than half way up the ladder, I was still about five feet from being able to reach the darned cat.  Sometimes it would run further up the tree, and sometimes briefly look as if it was considering starting to climb down.

Not to happen.  I’ll spare the details, but after

many minutes of trying, Jim declared that the cat would come down on it’s own, especially if we left the ladder and a long piece of wood balanced in the bucket;      and two young friends of Betty’s who could have climbed up but Jim was scared of insurance issues should something happen;      and I finally left for work …

There must be something about a pleading woman’s voice on the phone on a slow work day.  The captain decided it was time for the department to have “a training exercise” — while emphasizing that she “should tell nobody that we did this.”

She called me just after noon to say that Walldough was safely back home, skinnier and very hungry.  It was a little embarrassing to see not one but three F.D. vehicles show up — the paramedics have to periodically attend training exercises — and the deed was done.