When I arranged a family trip to Costa Rica almost a year ago, I made the assumption that there was just one International airport in the country — the capitol, San Jose. With the 20-20 vision of hindsight, a little more checking would have shown that there is at least one more International airport, north of San Jose closer to Nicaragua. The airport (and nearest town) is Liberia.  We would have flown directly pretty close to our destination, and saved the time and expense and trouble of an additional flight, coming and going, had I known that before.

But we would have missed the “Puddle-Jumper Airlines” experience …

trooper henry soon on another flight

Grandma Betty and “Trooper Henry” wait for the last of three flights to get us from home to our “home away from home” in Conchal, Costa Rica.

Sansa Airlines (a wholly-owned subsidiary of LACSA — the national airline of C.R.) is the domestic part of Lacsa.  As the sign says:  10 destinations within the country, out of the national capital, San Jose.  All ten of those destinations are WITHIN the country, hence, a domestic airline.   Some of those flights go west.  Some go north, like the one we went on, to Liberia. 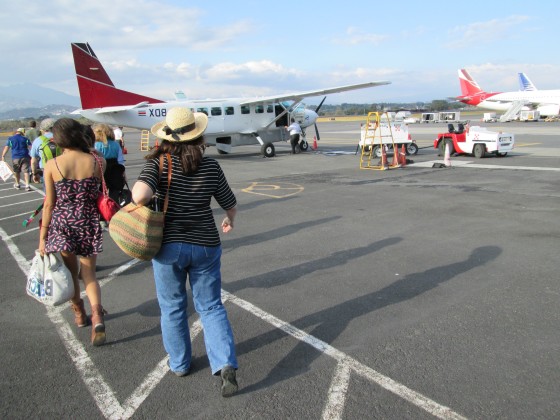 No, not the country in Africa — Liberia is (I think) the only other town (or city) in C.R. which has an international airport.  But i didn’t know that when I planned this trip.  Had I known that, well, oh, never-mind.  We would NOT have had the small-plane low-to-the-ground, intimate, buffetted-by-the-wind experience we all, um, enjoyed. 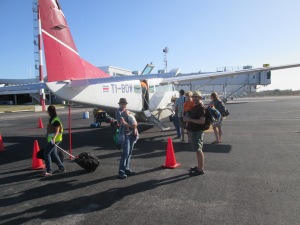 And saw most everything in between up close.  I thought this was the National Futbôl (Soccer) Stadium.  This must be a pretty important futbôl venue, but upon scrutiny of the actual map of the San Jose area, the actual national stadium must be somewhere else.

Where else can you sit in your actual seat and get a view like this of the pilots and the lack of a separate cockpit?

And another boring boarding-the-plane photo … Betty pauses in the doorway, Shannon and Tom wait their turn, and I don’t know what Rachel and Ben are looking at …  We were two-thirds (2/3’s) of the passengers on this flight! 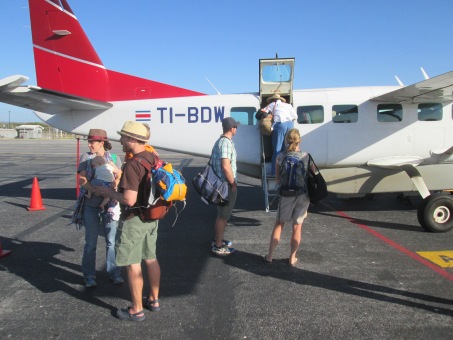 Below:  another glimpse into the seamy underbelly of the backwoods, or back-yards, or you-shouldn’t-be-seeing-this type stuff — like, you know, large plain warehouses full of those illegal pirated DVDs, or generic viagra, or where they breed those cute sloths and toucans and howler monkeys you see in all those posters of ecological rain-forest non-polluting tropical paradise, or …

Ben and Eddie peer at whatever it is …  We saw sugar-cane fields burning (yes:  THAT’s part of the harvesting process), wildernessy-forested uplands not too far below, towns and  villages — but not the higher mountains as they seem to be almost always shrouded in clouds.

(Below)  Henry, with head-phone noise-cancelling ear-muffs, troopers through this flight, too.

A week into our stay, Ben and I got up early to pick up Tom and Shannon from another Sansa flight into Liberia …  That’s Tom at the far right (below) — and, as he said later, puzzling at why THAT VAN is stopped outside the fence blocking traffic to take photographs.

A rare shot of Tom grinning (must have been sleep deprivation coupled with no bloody mary’s yet and jet lag, and thinking he might possibly have fun yet) and Shannon also acting like she was half-way happy to be there as van chaffeur Ben greets ’em outside the Liberia Dan O-whats-his-name airport.

I resisted the temptation to directly talk (harass?) with the pilots, and also did not succumb to the urge to mess with the controls … 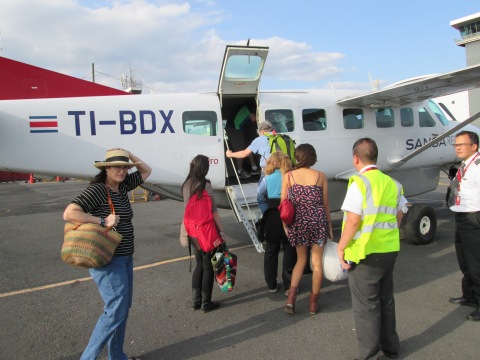 Again, SANSA flies all over Costa Rica — to the proverbial 4 corners, on a daily basis.  Based on our sample set of two, the carrier is pretty much on time, somewhat hassle-free, and scenic (of course).  I joked that most tourists would pay extra for something like this!

Watch out, though.  Each of us was WEIGHED before each flight, as well as our luggage.  We were over whatever weight amount each passenger is supposed to bring, and paid an average of about $10 extra/person.

Above, we are leaving Liberia to go back to San Jose, and from there, “home.”  Below, is Betty yawning, yelling, or singing?