Volcan Rincon (or one of the other 8 craters!) serenely poses as a backdrop to the Rincon de la Vieja Mountain Lodge

This past February, we spent two days in the vicinity of Volcan Rincon de la Vieja National Park in Costa Rica.  Highly recommended.  An interesting, educational, somewhat nearby interlude from what would have been a ‘strictly’ beachside sojourn.

Costa Rica has quite an extensive system of National Parks — 25% of the country.  This includes large tracts set aside for the “indigenous preserves.”

The volcano is 6217′ ft high (1895 m) — quite an elevation change considering the distance to the Pacific Coast.  However, the highest peak in the Park is Volcan Santa Maria at 6385′.  There are nine volcanic craters in the park.

The upper parking lot at the Las Pailas Sector.  Mid-February, I surmised that this is typical “dry season” weather — as the rainy season usually starts in April or later.  It was cooler than at sea-level, though for all of us, who had left snowy conditions a few days before, it was, still, a bit warm. 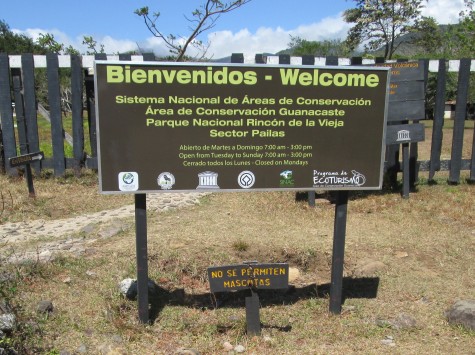 The Pailas Sector of the Rincon (de la Vieja) might be the “busiest” part of the park — I’m not sure — so if you were to visit other “Sectors” — I think you’d have a more tranquil, away from the other tourists, solitary experience.  But, heck, we had plenty of all of that:  tranquility, solitude, and if we wanted to NOT SEE other tourists, it would have been easy.

Betty and Eddy negotiate the Las Pailas (“Mud Pots”) trail.  For those (the majority, I’m sure) of visitors who don’t want to ascend the 1000+ meters from the park entrance UP to either the Rincon crater or Von Seeback peak, there is a 3 km (about 2 or 3 miles) circular trail where one can view various volcanic phenomena.  Mud pots, hot smelly mud pots, allegedly sulfuric mud pots, and a “mini volcano” (I walked right by whatever this is or was and wasn’t sure I walked by a mini volcanic crater — so turn the setting on your imagination phaser on “hyper imaginative”) –and features which the brochure identifies as “fumarolic”.

Above … THAt must be fumarolic, but not the “hot water pots.” Yes, indeed, we frequently passed more evidence that we were on the sides of a volcanic situation.  The brochure states that there has been recent activity at one of the craters, so that was closed to public viewing.

There have been eruptions (up much higher than we were) as recently as two years ago!  Still, the geothermal nature of THE PLANET not too far below where we were standing — lends itself somewhat easily to providing much of Costa Rica with somewhat cheap (almost) never-ending geothermal power.

You wouldn’t want to immerse any part of your body in that!

Map of the Pailas 3 or 4 km trail (lower right, above) — and for the more avid and hearty hikers, go UP on the map to the higher elevations.  If I were just a bit more energetic (and plan on this if and when I can return here) there would be a long distance run (well, probably more hiking) UP to the craters.

Eddie and dad pose and play about some of the weird (to us) tropical trees. 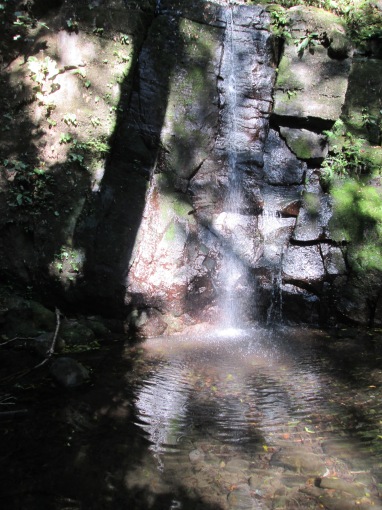 Frequent river crossings, and I was SO O  OO   close to just laying down (nekkid!) in this waterfall pool, but I was fatigued, and, sadly, didn’t.  Neat little interlude, anyway.

(And who knows, with my luck, there probably would have been brain-eating amoebas or miniature piranhas in this pool if I immersed myself.  Hmmm…. well, what with my upcoming suicide scenario, and the addendum of octuple-indemnity due to death by a combination of amoebas AND piranhas, SOMEONE could have a lucrative payday …)

Betty and I (and Rooch ‘n Ben) got a kick out of encountering the Colorado River — as B ‘n me live within a mile of the U.S. Rìo Colorado, and R & Ben know that river as well. 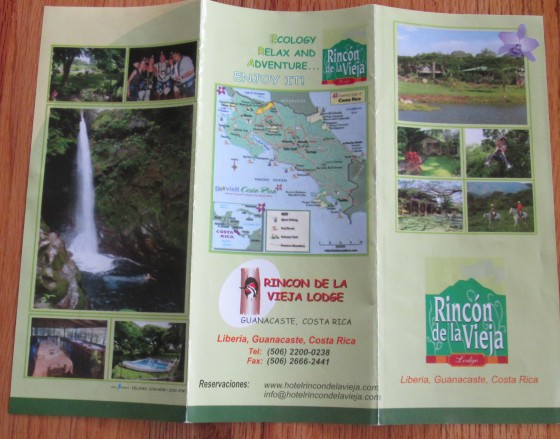 Not too far below the Las Pailas Sector of Volcan Rincon N.P. we just drove up to the …

This is/was the “off season” and prices were quite reasonable.  About $55/night per room — including breakfast.  And dinner was also reasonably priced.  Seriously, folks, THIS is a GREAT Lodge, in a great location, with either PLENTY TO DO — or …

(or, in my case, a great location to just lay around and DO NOTHING.  Okay, some insight into familial friction:  Betty likes to “do stuff” on vacations and weekends away, and Rosco prefers just the opposite.  A hammock, a good cigar, a glass of good beverage, and … this is what I “like to do”! )

At about 1640′ elevation (500 m), this location is (usually) a lot cooler than the lower elevations.  There is a herd of healthy horses which guests can ride around the estate (la finca), which appeared to be quite extensive.  In my next visit here, I’ll run the trails leading away from the place — at least one which ostensibly going to some hot springs a few miles away.  There is a ZIP-LINE — which none of us partook of — but it looks formidable. (ALL zip-lines look “formidable” to me, as that is just one thing of many crazy undertakings I won’t do.)

Do NOT Check http://www.hotelrincondelavieja.com — as even though that address is (was) on the brochure — it was “not working” when I last checked.  Stay … toond.

Obviously, the gardening staff stays busy, and this lodge is pretty well cared for. 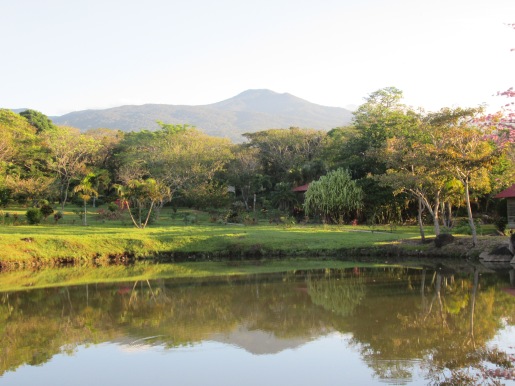 If I were more familiar with the area, I’d know which mountain that is/was.  Usually the higher elevations are shrouded in clouds.  I wouldn’t be surprized if one could fly-fish the ponds … 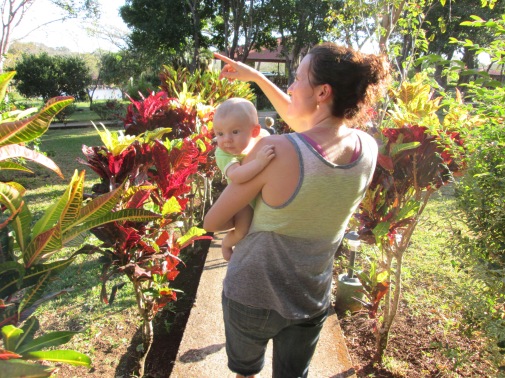 Henry and his mom explore the premises.

More premises — this is a view from the open-air bar/gazebo/meeting room. 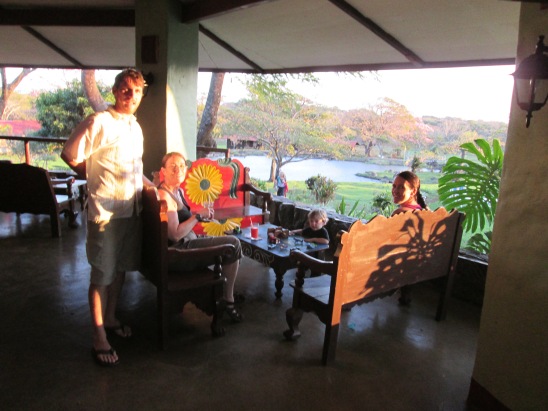 The late-day approaching twilight is not only borderline hypnotic, it’s more than borderline dream-land. 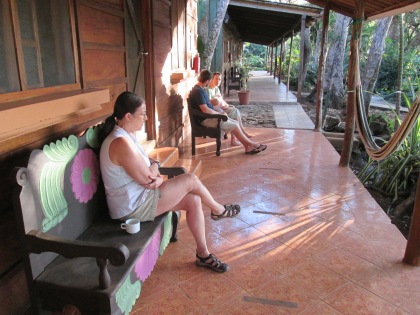 A word of warning folks — the rooms (ours were quite comfortable and definitely tranquil) — DON’T have television!  Are you here to watch television and tune back into the iPod/FaceBook/connected-internet world?  I hope not!

After breakfast we drove a short distance to the nearest Hot Springs:  Rìo Negro.  The pools vary in thermal activity from “brisk” to “refreshing” to “warm” to “barely tolerable” (but the b.t. is what you came here for!).  Somewhat pricey (I think it was $10/each but kids were free) and we enjoyed our solitary jungle experience.  Again, it’s the off-season and we saw a couple workers and one other guest (a Venezuelan tour-guide we met at the Lodge as she was shepherding a group of German tourists.  Betty and Ms. V tour-guide talked at length about all sorts of stuff).  Above, Dad and Eddy soak away the previous day’s hiking aches and whatever.

Rìo Negro Hot Springs (Fuentes Caliente de Rìo Negro) had some pretty nifty bridgework, and trails, and changing rooms, and … oh yes, lots of pools!  One could also sit in or near the River (Rìo Negro) — where Betty and Ben observed a lizard RUNNING ACROSS THE SURFACE OF THE RIVER.  They called it a “Jesus Lizard” — only to later find out that this area had a species of reptile called the Lagarto de Jesús.  Yes, you guessed it.

This part of C.R. is one we only spent parts of two daze in, and if I ever return (keep in mind I’m old and decripit with other disadvantages so I can only hope …) I definitely will consider several daze (days? if I’m not so confused) in this area.