(Thanks, Wikipedia, for the picture.  Yes, this is exactly as I remember …)

This can’t be happening.  Surreal.  Though so groggy as to be barely-conscious, I have the strong impression that uncomfortable, probing, invasive things are being done to me.

Physical sensations — though muted — gradually made me increasingly uncomfortable as the cumulation of poking and probing and jabbing and needles continued.  The body (the mind was already there) was approaching a state of shock.

My vision was so blurred that I could be anywhere.  Well, “anywhere” which was not brightly lit but mostly hazy.  There were bright lights which were generally shining right in my eyes, effectively blinding.  I could easily imagine furtive strange figures nearby, indistinguishable in the haze and shadows.  Little did I suspect a half day before, Monday morning at the start of the work-week, of the bizarreness and helplessness and trauma I would be subjected to.

The account (so far) of my experience is slightly exaggerated.  I was undergoing surgery to correct a right-eye retinal separation which was manifested a few days before.  The patch over my eye (above) is ‘real’ — the cleaver is symbolic of how I felt after the operation.  The patch has an arrow drawn on it, to remind Betty that I should  be positioned lying down with “this way up.”

I woke up Wednesday (Nov.19) mostly blind in the right eye.  This was somewhat perplexing but figured I had been having various strange ailments and aches and pains and symptoms — for months if not years — and that hopefully this, too, would go away.  I even ran the local Turkey Prediction Race on Saturday AND played goalie at the Wednesday night pick-up.  No other goalies showed, so I HAD TO stay and go through the motions for the entire game.  But Sunday (Nov. 23) it was obvious I should have this looked at by a doctor.  I talked with my daughter, a critical care nurse, who said that this might be caused by a brain tumor pressing up against the optic nerve.  When I talked to my boss the following morning, the first thing he thought of was similar.  His mom had temporary blindness caused by a tumor, which was removed and the vision restored.  “That didn’t kill her,” Dave said.  “She died a few years later of something else.”

My eye doctor, Jose Gallegos, called a few minutes later.  (I had left a message with his office the previous Friday).  After listening to my symptoms, he didn’t ask, HE TOLD ME to stop what I was doing, get in the car and drive directly to the Retinal Center.  He would make the arrangements for an appointment.  His admonition:  “be prepared to be there for several hours” was more than slightly foreboding.  I wasn’t quite sure what that meant. 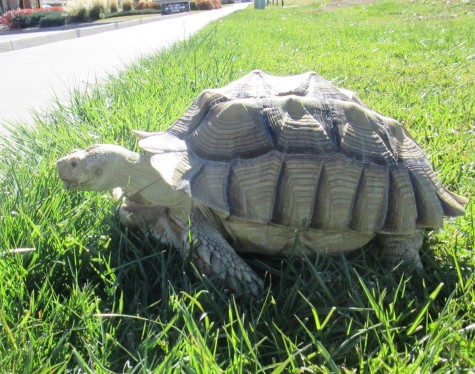 This picture of Bruce has nothing to do with the ongoing story.

I didn’t drive there directly — I called Betty as it was mandatory to have someone else drive me home.  Fortunately she wasn’t busy and acted like she has a vested stake in my physical well-being.  Our town’s Retinal Center was surprisingly busy and spacious.  There were several patients (probably many were people accompanying patients) sitting through-out the waiting areas.  Nice salt-water aquarium.

Before long I was seated in an exam room, and the preliminaries began.  Lots of dilation eye-drops.  Back to the waiting area for this to take effect, then escorted to another room.

The Doctor, Jonathan Harder, came in, introduced himself, briefly asked about my symptoms and then conducted an eye examination.  This was preceded by lots more eye-drops.  The initial stinging sensation subsided to a moderate pain.  The pain-level was elevated to “extremely uncomfortable” when he assessed each eye.  Basically, he had to manipulate each eye-ball by hand, all the while peering through what seemed to be telescopes protruding from his head set.  Extremely bright lights.

At the conclusion of many minutes of not-exactly pleasant eye-ball massage, he stopped.  Betty and I had seen the latest Hunger Games movie the day before, and I couldn’t help but remember the last scene, where Peeta tries to kill Katnis by strangulation.  I would have been real tempted to do the same had the manipulation lasted any longer.

He told Betty and I the bad news.  Yes, the retina is separated.   It does not heal without some outside assistance.  I was somewhat surprised when he said that this is usually caused by “the number of candles on the birthday cake” and not something like, say, getting hit in the head with hockey pucks.  He tried to assure me that this was not caused by any discrete physical trauma, not even cumulative occurrences. 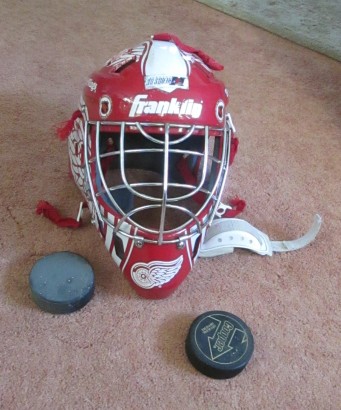 (Which means I can eventually return to my senior-citizen hobby!)

Here are your options …  I don’t think he mentioned the “do nothing”.  To do nothing meant that eventually one would probably go completely blind in the eye.  There were three (or so — I seem to remember) surgical options.  One was the quickest:  in-office, with shortest recovery time.  The others involved hospital settings, general anesthesia, longer recuperation.  Seeing as how I’ve purchased tickets to fly away for the holidays facilitated option #1.  But I was more nervous, anxious, scared — actually, than I had been for any other surgery or procedure I had ever been subjected to.  Being totally knocked-out seemed a viable option — but I knew I had to go through the quickest and least-complicated procedure.

I cowboyed-up and said, yes, let’s do this right away.  The amazing thing was that the doctor was available and ready to commence immediately.  A lot less time for my fear and anxiety to amplify and gnaw …

The procedure seemed to last about a half-hour, no really telling exactly HOW long, and was performed then and there in the exam room.  Although I did feel and experience uncomfortable sensations, I was so groggy that this was nowhere near as painful as the initial eye-probing/manipulation!   I joked that this was all so surreal, that the office should have people in the room with alien-head masks and wierd music and sounds.  The doctor did not seem to think that this was funny.