Possible DISCLAIMER:  Betty talked to me about an acquaintance (“swimming buddy”) who died recently.  After reading the obituary and conducting a chronological analysis, I wondered … did I have a “running and cross-country ski-racing buddy” who may have been the same person forty years ago?  You decide.

Betty has been swimming pretty regularly for years. In all that time, she has come to know the local college swim team, life-guards, and other regular swimmers.  One of her favorites was an older age-group competitor, Dr. Richards — whom she knew as “Hugh.”   A few weeks back she came home and sadly announced that Hugh had moved from this realm to the next.  She talked about him a little and I listened sympathetically.  I didn’t have even the slightest stirrings of recognition nor familiarity.  How could I?  I hadn’t met Betty’s fellow swimmer.  Then I read the obituary.  Prominently-mentioned was his stint in Saudi Arabia as an Aramco physician.  After that, he and the wife moved to Happy Valley. 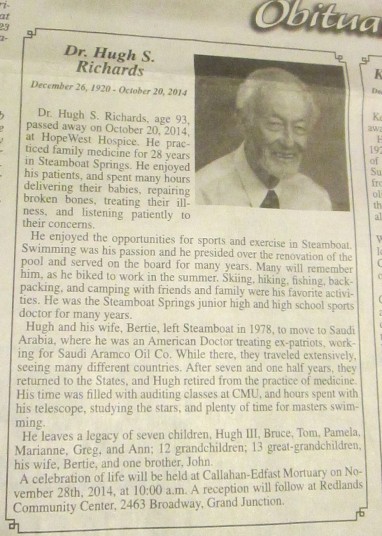 In 1972 I worked as a carpenter in Steamboat Springs.  As was the case frequently in my life, after I was somewhat settled I (re) began a running regimen.  One summer evening I encountered several runners going the opposite direction of my work-out.  In particular I still recall a young boy and a thin grey-haired man racing side-by-side.  The local club was having a low-key group run.

I was getting back into better- and better-shape, and I contacted the running group to see if there was room in anyone’s vehicle for out-of-town races.  The older man I had seen recently was one of the regular team-members for non-local events.

There was last-minute space for me in a van going to Vail for their fall 10k championships.  This race is probably still being held, but back then it was not only an event with individual awards, it had a very competitive team aspect.  The scoring was standard cross-country.   The first five out of the seven or so team members contributed to their team’s point-total.  The Steamboat team consisted of Dan and Don Quinn — identical twins whom I knew from the Western State College cross-country team five years earlier; Pablo (Charley) Vigil — who was living in Craig (not too far from Steamboat), whom I had seen winning the state high school cross-country race two years previously; a high school math teacher; someone I can’t recall; and the thin older man.

We arrived in Vail and I queued-up to pay to enter the race at the check-in area.  Dan (or Don, I could never tell them apart) called out that since “Steamboat” had paid to enter a team of seven, one of whom wasn’t present, I should just pick up the spare number and fill-in the required data as their final team member.

The race was underway shortly after, and I settled in for a pleasant jogging work-out.  It was easy — I had bumped into an acquaintance I knew from my previous races on the Front Range.  I have forgotten his last name, but he was Dr. Jim.  Recently graduated from Colorado State, Dr. Jim was beginning a psychology practice in Fort Collins.  We ran side-by-side talking, Jim mostly.  He talked of his plan to conduct psychological sessions while running with patients.  I was mostly quiet while Jim talked of how he’d get patients to open-up and tell him their problems.  Our run was relatively pleasant, going fast enough to be ahead of the middle of the pack, but we didn’t really care.  The course had several twists and turns towards the end, so that someone could venture a couple blocks  perpendicular from the finish line to see competitors who still had a half-mile or so to go.

I saw Don (or Dan) standing on the edge of the course, watching runners go by.  He obviously had finished already and had trotted back to check on his team-mates.  His eyes widened with surprise when he saw me.  “You are our number-five runner,” he shouted.  “You had better pick it up.”

I too, was surprised but increased my pace immediately.  I had assumed I was runner # 6 or 7 for Steamboat, on the team but not figuring in the team standings.  Conversation having ceased, Jim matched my pace and we raced the half-mile or so to the finish.  I reached the end one step ahead of him.

Turns out Steamboat was the second-place team, beating the Ft. Collins Track Club by one point.  The Boulder Track Club won easily, having several of their runners in the top ten — many of whom were University of Colorado alumni or track-team red-shirts.  Pablo and one of the Quinns were 5th and 6th individuals, greatly aiding our team score.

The awards ceremony was borderline raucous.  The individual winners were recognized — then what seemed to be the main event, Team Awards, commenced.  The third-place team, Ft. Collins including Dr. Jim, took the podium and accepted medals.  Then the announcer called for Steamboat.  Two of my friends from Boulder, Tim Cronin and Loren Schnell yelled at the “dirty long-haired hippie” up for an award.  Tim was a friend from a different high school — he was, unlike myself, a very good runner.  Loren was a highly-regarded master’s racer.  And he was somewhat of a legend.  He had been a millionaire, had an epiphany, gave away all his money, and worked as a dishwasher.  And both of them had longer hair than did I.  We shared a six-pack later.  Of Coors, of course.

I ask for the reader’s forgiveness for this, a deviation from my intended main story-line.  However, in re-remembering my acquaintance from forty years ago, I hope you enjoyed my recollection of what was a memorable and fun running event.

On the van-ride back to Steamboat our team was upbeat, almost jubilant.  We talked, we raved, and bonded … a little.  The Quinns I had known before, but long after this ride I remembered the names of the public school math teacher and the older fellow whom I am pretty sure was the town physician. 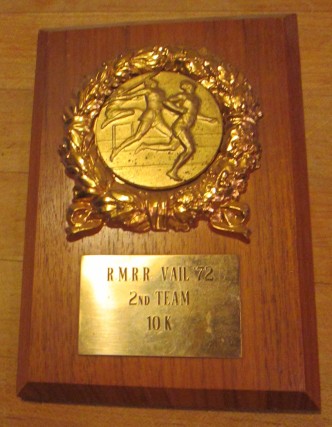 Two years later the doctor and I crossed paths again.  I participated in a few cross-country ski-races and mingling before each event among the other competitors and knowing no-one, saw a face I recognized.  The guy from Steamboat, let’s call him “Hugh” and I would talk before races, encourage each other during, and hang a bit together afterwards.  The last time I saw Hugh was at a race up in Crested Butte.  It was a thirty-mile drive for me, much further for him.  I remember his self-derogatory comment in that he must be crazy, driving all this way through winter conditions for a race.

I might not ever have had the opportunity to recount this story had I not thought about Betty’s swimming buddy.  When I analyzed the obituary, noting that Dr. Hugh lived and practiced in Steamboat when I was there, I went and looked at my dusty plaque from 1972.  Hmmm …