It’s been two months + now since I have,

allegedly, so it appears, going-thru-the-motions,

A neighbor walked by recently, commenting, favorably, on how goes my “vacation.”  I told him that I did not in any way feel like I was “vacation-ing.”   And after some reflexion, (w)rememburd someone(s) saying I should be/could be/ “living the dream”.  Not hardly, but, heck — there has to come a point where I can shed these astral entrappings of disillusioned semi-depressed low-energy zombie-like vacuity, and, well, like a buddur-fly, break out of this “prison of my own devise”.  (I think that phrase is from a Gym Morrisun sawng).

Sigh.  At the time I was going-thru-the-motions of the what-certainly-seems to be the Endless Drudgeriousness.  The Never-Ending subjugation to the Greenliness (or lack thereof) Of The Lawn.  Robert (the neighbor) trundled off, on his daily shuffle to/from we-don’t-wanna-know-where.  I returned to, oh, whatever.

I also at times start feelin’ bad, a little, about the abrupt and, so far, almost complete cessation of contact with the werk-mates.  For seven years (4 7 yeerz) I had almost-daily (except Sat/Sun) contact with three or four others – an inextricable component of the fabric of daily life.  “How was the weekend?”  (the vacation) (what happened last night?) and up-dates on the current goings on (wha gwanz) of our jobs.  In-&-out in the field, and mostly in the office.  Communal coffee pot.  The watering-hole in the jungle.  The various denizens of the forest, with the occasional predator.

I dropped by once, and will again –

So, yesterday while walking out in the yard assessing lawn-watering options, I briefly thought that I should call “someone” at work, and did:  quickly pulled out the phone and dialed my (former) boss.  We talked, sliding into easy conversation after he figured out who had called, for about 30 minutes.  Pleasant chatting, the threads of (re)acquaintance firmed up a bit, slowing down the un-entangling which inevitably will occur.

Betty recently “upgraded” for a phone like mine.  I asked the store-clerk for assistance in how to tell them apart ~

I’ve gotten into a few “bad habits” – one of which is getting out of bed at about the time I should be showing up at work!

Another habit is the tendency to consume a bit more beer than I would-a – mostly ‘cause mon-thru-fri I used to get home at 6 or so, then have a beer.  And/or whiskey.  Now? This could start at noon.  I had a satisfying and upbeat 4-mile trail run a week ago, got back to the car, looked at the watch (9 a.m.) and thought “I sure could go for a beer right now!” – but I did wait ‘til afternoon.  What restraint. 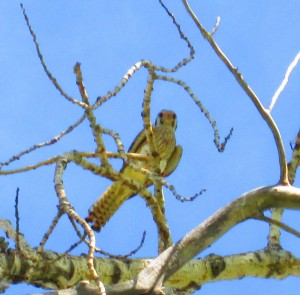 a nesting pair of American Kestrels has taken up residence in our yard!  above is, I think, the female ~

I had planned to start going through all our “stuff” and not only catalogue-ing, but with concurrent donation of extraneous stuff to the regional clothing-giveaway-to-the-poor outlet; Habitat for Humanity for most other items (sets of dish-ware and stainless (silverware), retired lawn mower, sporting equipment, toys, etc.); and donations yet to be determined (and acted upon).  Just after going through a storage shed, there were 3 or so trash cans hauled down the curb.  So … for the time being, I’m pretty familiar with what’s in the shed.  If it weren’t for the summer heat (most days > 90 deg f) I had planned to be going through the garage.  Theoretically, the house would follow.

I had assumed I’d make it to hockey games at least twice a week.  I think THAT happened once, and am trying to get in one game a week … but I try to attend the weekly Hockey Player “Power Skating” session, and berleave it oar else, am getting slightly betterer.  At skating-out, that is — not “goalie”-ing.

No, I am NOT “livin’ the dream” – yet.  Maybe with a change/adjustment of attitude I’d SEE that this is, indeed, a dream, and not necessarily over-burdened with a plethora of night-marish aspects.

As work wound down and I contemplated the BIG CHANGE of my life, my schedule, my priorities, what I’d spend time doing, I couldn’t help but enumerate and consider the

And so, the Death thing is next!  Depending on how long this Retirement Thing lasts.  “Long”?  Shouldn’t there be other attributes, such as “depth”, “heighth”, and/or “over-lapping into adjacent dimensions” (and maybe some other dimensions aren’t necessarily adjacent but accessible anyway) ?

And, uh, yes, this dying thing.  I haven’t been a renowned (“good”) artist at anything this life, but what if I make the DEATH phase one of magnificence?  Profound.  Reverberating.  Memorable.  Long – drawn out – tedious – agonizing – noisy – olfactorily unpleasant … Uh.  Let’s stop at “profound”.

A thing of beauty.

However, in the manner of Theodoric of York (Satyrday Nite Live skit performed by Steve Martin, I think) … soliloquizing, “to be or not to be”, pacing back and forth on the stage, concluding:  “NAAAAAAAHHH!” 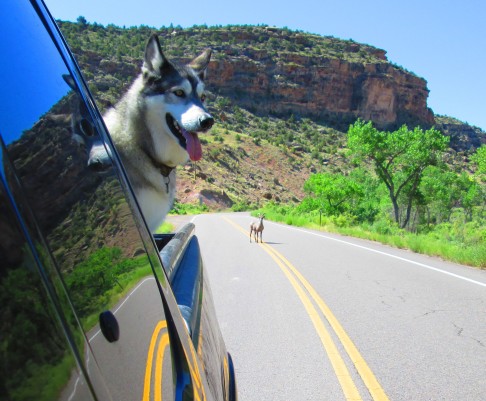 I’m worried that the Unaweep Canyon Desert Big-Horn Sheep Herd is losing its Fear of People.  And Cars.  And Dogs.

The 7 Plagues of not-so-ancient Egypt

Just as Moses inflicted his captors with 7 separate maladies and such – I’ve (un-4t-u-(in)nate-lee) had time to consider what we put up with here.  At home.  Not earth-shaking nor of cosmic consequences by any means, but IF YOU’RE TRYING TO ACHIEVE AND MAINTAIN WHATEVER DEGREE OF “YARD BEAUTIFUL” there are events which make matters much more difficult.

1.        The elm trees go to seed.  Many thousands, possibly more than thousands, of seeds twirl down like a maelstrom at sea on our sinking cargo ship, scattering everywhere, multitudes of seedlings cropping up, needing to be pulled out.  It’s been two + months and I pulled some out today.

2.       The cottonwood trees “do their thing.”  During stiff breezes it can look like a snow storm, and the crap piles up like little snow-drifts – and it’s heck scooping the stuff several times a day out of the pool.

3.       The purple (as opposed to white) mulberry tree lets loose with it’s fruits-of-the-devil.  It wouldn’t be so bad if it was far from the house.  But the tree is just off a corner, raining down purple paint-bags, spattering and splattering (whut’s the diff betwixt spatter and sp(l)at?  Prob’ly nuthin’ ~) on the terrace, the lawn, and a set of steps, so thick that one can slip and fall on a veritable mass of jelly-and-jam smeared on the ground.  (We had the tree cut down recently).

4.       The Russian Olive trees are next in the royal succession (“suck-(not-) cessation”) for letting fly gazillions of their unique seeds and other sperm-errata and flot/jet/sam which will start dropping, drifting, falling, piling up, soon.

5.       With the increase of the heat of the season come the mosquitoes, and even more fun, deer- and horse-flies.  There are almost no horse-flies anymore, since we’ve un-become equine custodians a few years back.

6.       Ants.  Especially when dozens of nests erupt concurrently with thousands of newly-hatched potential queens flying off to start new colonies.  I wish I could say we were exempt from attempts to start colonies IN THE HOUSE …

7.       The GRUESOME & TERRIBLE OBJECT FOUND OUT IN THE YARD one night a couple weeks back which I will not specifically describe nor identify.  Yes, it was the most awful and terrible thing we have ever found in our yard.  Even in the day-time, the awfulness/gruesomeness would not have been less diminished.  I’m glad we found (and disposed of) it at night, when we knew basically what it was, but not the extent of in-depth characteristics.

And hopefully, I will not WRITE (but possibly SPEAK) about it ever again.  Granted, Plague #7 is (I certainly hope!) a one-time event – but every year we have some unique hitherto-unexpected Plague #7 to make our out-door property-maintenance challenges somewhat analogous and remotely smacking of the biblical implications Moses brought down in his neighborhood these many centuries ago.

I’m determined to finish this book.  Have tried three times before — but am fairly confident that THIS TIME I will (at a minimum) at least look at all the words in sequence.  “Mel” (the cat) sits on my chest as I lie down reading and doesn’t make this activity any easier …

And!  Yes, maybe, I’m slipping into my personal version of the Australian Aboriginal ‘Dreamland’ – and with any luck at all, I could soon be indistinguishable from the all-encompassing multi-dimensional matrix of time, space, flying ants, gruesome objects, and purple mulberries any day now.

But as you no doubt already know, upon stepping away from full-time employment, one has EVERY DAY OF THE WEEK to do, well, fun non-work-related stuff.  One Friday early afternoon we popped open a bottle of w(h)ine, sat on the couch, watched a Netflix movie.  And last Friday drove up to the Uncompagre Plateau/Divide Road, maybe 30-some miles from our house.  We hadn’t been to the Big Creek Reservoir area for maybe 30 years! 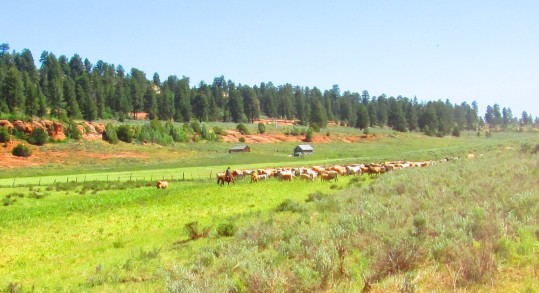 a cowboy roundin’ up cattle

Casto Reservoir, lookin’ down-valley to the west.  We’re at about 8500′ elevation — breezy, pleasant.  We should have brought a picnic basket! (& campfire makings, to keep the miskeeters uh-weigh)

Betty and her pacing crewe, rowin’ up the road ~ 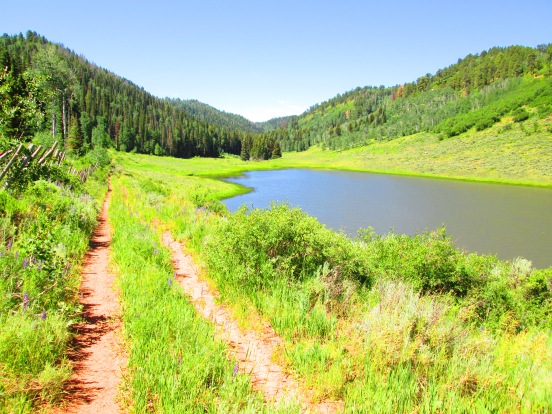 Big Creek Reservoir.  No, it ain’t big, but it sure is pretty !  A serious (“good”) mountain-biker could have ridden this trail without difficulty, but we managed only about 1/2 mile more before the bugs and such turned us around. 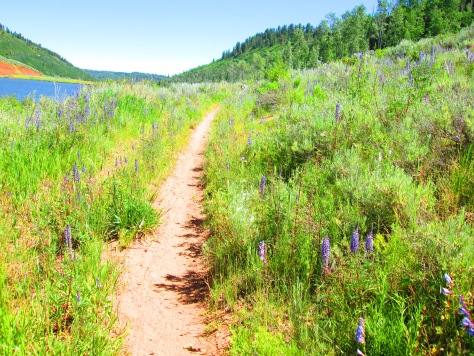 Purple flowers (a few other colors also noticed, but, alas, not shown here)

Betty and Jake (black), Ja-Ja (brown spot) and Rock-Sea (seen earlier) on the way back to the truck ~