Below, me and an acquaintance, before my 72-hour mind-melting ordeal ~

I’ve recently experienced (endured) the most traumatic 72-hour span of time I can right off-hand remember.  Granted, my me(s)mory ain’t what it used to be, in fact, it might not ever had been what it used to be, or ever was, or might be.  Never-the-less :  which of the following is true?

Yeah, you guessed it.  I had mis-givings, apprehension, wondered how I would survive this, but I did.  It took a lot of beer, side-stepping many of my daughter’s admonitions as to schedules and diet and etc.

She gave me a short list of meals to prepare — e.g., scrambled eggs, broccoli w/cheese, spaghetti, mac-&-cheese.  “And be sure to get them in bed by 8 o’clock”, she added.

She (and husband) returned home 3 days later.  Grandsons and I were playing out in the front yard.  She could tell things had apparently gone fairly well.  “What did you feed them?”

“Most they time they wanted Captain Crunch cereal”, I replied.  “And we stayed up ’til midnight watching the Hobbit movies and some weird science-fiction stuff which I hadn’t seen.”

Below, I appear pretty much the same after the 72-hour mind-melt ~

There has been a mysterious bottle parked in a corner of our kitchen for, seriously, many years.  The corner is between two shelving units, with tea- and sugar-canisters wedged in-between cook-books, etc.  Just last week Betty, on a cleaning pogrom to eradicate years-old dust-beasties and such, pulled this out and dusted it off. 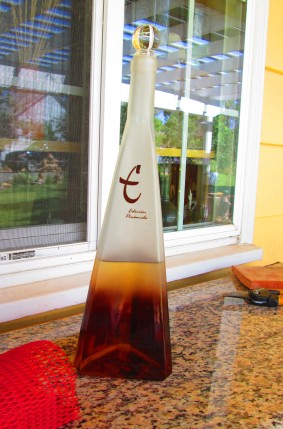 It was half-full, and the labeling indicated tequila.  The bottle was wrapped in a sort of red nylon-mesh.  We had a few sips — you know, to check how poisonous this was.  And for the life of us, we do not, did not, remember who and when this became parked in this kitchen corner.

Having never heard of the distillery nor product name, I looked it up on the internet.  To buy this bottle costs about $400.  A couple, three, times a week I’ll pour some into a glass, and savor.  Sometimes while struggling through whatever it is I’m reading.  And just as often, to (again with the mind-melt) binge-watch previous seasons of Game of Thrones.

Betty (right) and RockSea (bottom) and our daughter (top left) host a “kiddie’s pool-party” as she catches up (if THAT is ever really possible) with two of her old friends.  Mindy and Taya and Rachel went to Middle School and were on the same soccer team together — 20 years ago.

Often the sky and aetherealelements entertain us with displays of the intermix of the seasons, and atmospheric currents and other unseen but hinted-at goings on …

Last weekend/weakened we drove to the top of “the Mesa”, and (below) is the road up-&-down we usually take. 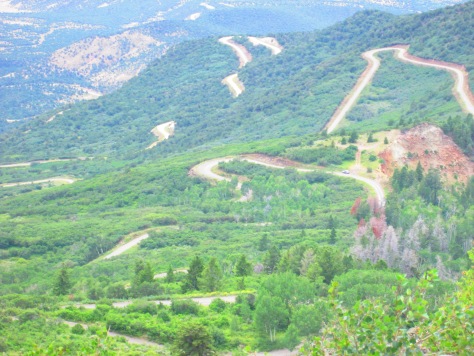