Below: recently we drove by the (allegedly WW2-era secret) Silos of Mysteriousness, in Glade Park (Colorawdough).  Our pixure don’t do them justice — constructed of concrete, these are relatively HUGE — 50 yards or so in length.

A little past the silos, headed west/north-west toward Utah ~

You suppose the Anazazi occasionally sought shelter in there?  At Knowles Canyon trailhead, we hopped on the bikes to ride to Utah.

(Below) :  Betty looking forlorn, or dismayed, at the recent W. Colo. Senior Games, swimming competition.  She is/was grumpy as, unlike last year, where she was Queen of the pool, this year, she was not.  I did not successfully defend my title of W. Colo. Senior Games mile (1600m) champ, but did win the 800m.  (The faster runners skipped that race).

Betty scans the Gunnison River valley between Escalante and Bridgeport.  We’re across the river from the Dominguez Wilderness Area, visible in the distance.

The head of the recently re-constructed G. Rvr Overlook inuk was put back on, as Rocksea pauses ~ 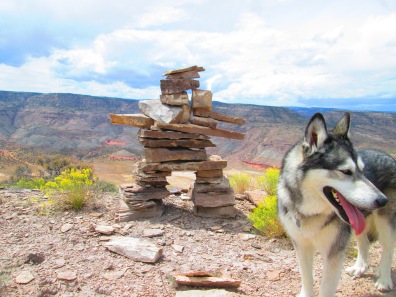 And Jake seeks whatever shade he can.

Hummingbirds have been avoiding our feeder, due to this predator.  I did not think this a real danger, but a WordPress friend who lives maybe 40 or so miles south provided some info — which included a photo of a praying-mantis feeding off a hummer it had caught.  Solution to this problem, a few pictures below ~ 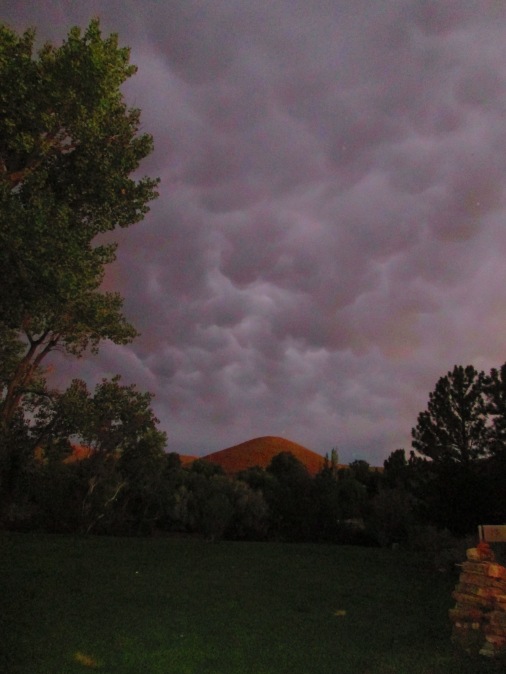 I re-built the original Inuk of Whitewater just today.

And basically re-built the nearby Inuk of North Bean Ranch.

solved?  (A plastic dinner-plate).  Should I get the patent and sell this on late night T V ?  (Yeah, you’re right — somebody already has the patent and may or may not be making money off this ~ )

and, now, for something even more completely different ~

Read a post which goes beyond 2 sentences.  Well … three sentences if the message seems clever.  Maybe 4 if the exposition has some sort of “resonation” with most readers.

Seeing as how I’m at sentence #4 and there is no cleverness, inherent cosmic message, nor even the slightest sub-atomic-resonating imperceptible to all but the “God Particle Detection by obliteration of sub-atomic particles/units/waves by particles which are even more sub-atomic” (GPDOLambdaMSa) cyclotron, I’m surprised you’ve read this far.

What I meant by “nobody” is axually “hardly anybody” which is, most the time, basically, nobody.

And so, I can’t decide whether to lament, exult, stay-the-course, complain (which is a lot like “lament”), merely record and relate history, or what.

Stay the course it is.

I don’t know whether I’m livin’ (sounds a bit like ‘livid’, eh?) da’ dreem, or trying to stay cognizant (whatever THAT is) of the downwerd spiral UV DEATH, or some other basic purpose which I can’t either relate, nor pixure, or is too arcane for me to even realize that’s what I’m doing.  (Of course!  THAT’s my modus operandi, that last thing, whatever it is.  Or isn’t.)

Recreational cannabis mint-tablets are often fun.  “Livens up a dull day” like my cousin-from-another-mother yoosta say.  Good ol’ Oscar Olivivas.  Wundur whutt heez up to na-ow … and if not “up to”, then … down where, what?

In writing a review of a “recreational trail” for the local running club newsletter, I used the term “MoFo” to describe a debilitating strength-sapping existential uphill at the end of the run.  That is, if the “Holy Bucket” loop is run clock-wise.  Counter-clock-wise, it’s a lot easier.

So, “MoFo” might have negative connotations.  I don’t know whatcher theenking, but it’s an abbreviation of “Mohammed’s Follicles.”

As in, you know, the inventor of Islam, Mohammed, and his hair.

As could (remotely? please?) happen, won’t the brain-dead-soul-less-zombie zealots (a.k.a. ISIS) come after me for insulting their proffet?

Profit?  (by however estimation.  Itsa mistery 2 me).

Ya’ never know, but I’m fairly sure I’m so far “beneath the radar” (remember when that phrase was sort of cultural/temporally/technologically appropriate?)* that BDSLZZ (& it’s subsidiaries) won’t notice.

To the minions of BDSLZZ (ISIS) – I meant no dis-respect.  I used the prophet-follicle adjective with an attitude not only of endearment, but with the utmost admiration.  As in describing the challenge of the uphill portion comprising the last bit of the trail – which is (like the hair) wiry, enveloping, enduring, insulating, wavy, magnificent.  Especially when you’ve survived running UP the thing and even tho’ you felt like walking, or turning around more than once, or three or four times, you did it.

*”Beneath the radar” – might’ve been technologically-relevant some years back, but, as I’m typerrating this in 2016, if the media is to be believed – aren’t satellites in space, drones, animals-walking-through-your-neighborhood-which-aren’t-animals-but-robotic-surveillance-devices, and the parked-there-so-long-there’s-an-inch-of-dustengrime-on-it service van outside your house much more up-to-date than radar?  What do I know … ?  So – I might be beneath the radar but probably not BEYOND the scope of present-day surveillance devices and such.