For those of my (semi/ir)regular readers, who’ve scanned thru’ the previous two posts — having to do with “back-roads” driving TO & FROM Portland, Oregon — I’ll focus on the in-between.  Not going, nor coming.

We arrived in Portland after some 47 hours and 1200 miles “on the road” and Betty and Grandsons immediately settle into their mutually-enjoyed hobby.  Yes, they think they’re doing the watching, but of course they are the ones under scrutiny by the evil all-seeing eye …

The familia Jorge (Ben & Rachel George, and Eddy and Henry) appear to be scanning the ocean from their boat — the boat being in a neighborhood park at the conclusion of The Easter-Egg Hunt.

We took a trip downtown and channeled the China-Town Dragon.  Then, a tour through the Japanese Gardens.  Intricate sidewalk construction, eh? 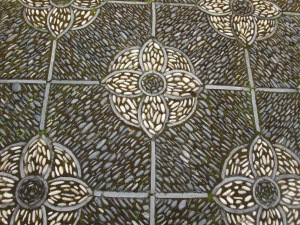 Eddy enjoys the koi — and he and Henry have named some of them from previous visits. 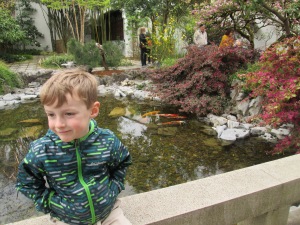 Above, more stuff to ponder, meditate, be drawn into at one’s very feet.  Below, pensive Henry (& his mom) while we’re at the Tea-House.

on our way to a weekend in Bend.  From the top of Santiam Pass, I think that dramatic peak on the right is Mt. Washington. 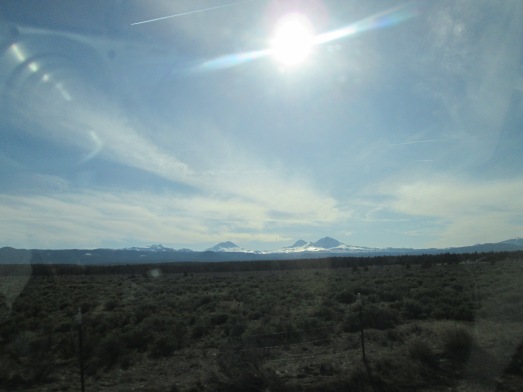 Descending into Sisters (somewhat on the outskirts, or outer “sphere of influence” of Bend) we look west and … I’m pretty sure those are the Three Sisters Peaks — all over 10,000′ high.

Bend does have a dramatic western back-drop, but we took relatively few pix of the place.

Ben, Rachel, their friend (her husband’s hand is foreground, right) and their combined 4 kids make for a lively beery luncheon at the Silver Moon Brew-Pub. 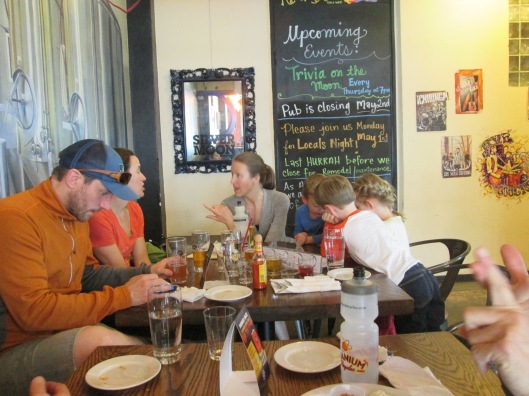 The kids liked (and could have lived in) the hot-tub at our rental house.  And … 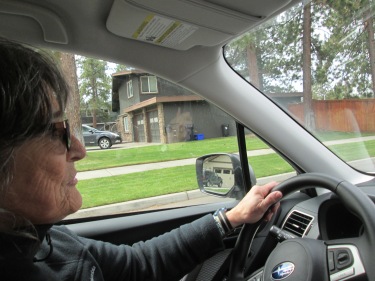 Betty d(e)rives uh-weigh from the rental house.  That night, quiet, all alone, whiskey by the fire pretty close smack!dab in the middle of Nevada.

Next day, 1,050 miles and 27 hours after exiting Bend, we’re home.  Photo below:  I had a rougher-than usual time at the Wednesday-night game — or, the sticks did.

Alpenglow of sorts on treez in our yard.  Our son surprizes mom with a visit over Mom’s-Day weekend.

His girl-friend and their dogs also visit.  Below, a pause from my work-outs (riding the bike or running) out in the high desert of western Colorawdough.  A hazy day — you can barely distinguish the West Elk Mtns approx 75 miles to the southeast … 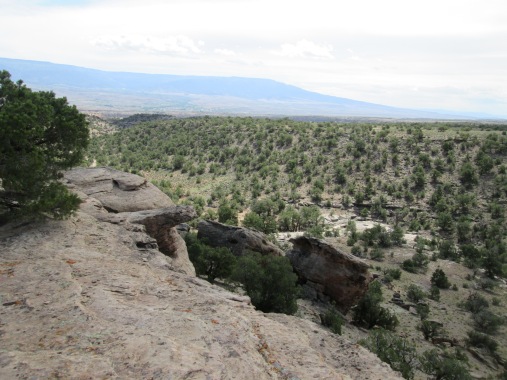 8 thoughts on “Neither COMING nor GOING”