Not too long ago (Awe-gust 2018) our friend Sue arranged for a bunch of her friends to take the … MORROW POINT BOAT TOUR.  Betty and I have lived (livid?) in west Colorawdough for 40+ years and though this location (and associated ‘tour’) is within a 2-hour drive of where we’ve lived, we haven’t heard about the tour — which provides GUIDED access and introduction to Morrow Point Reservoir, and, well, most the Black Canyon National Park area has been unexplored by us.  Perhaps THAT’ll change …

Though not as well (re)-known(ed) as it’s downstream bigger brother, the Grand Canyawn of the Colorawdough River, the Black Canyon (of the Gunnison — the C. River’s almost-equal tributary) is 2,000 feet deep maximum, with but a fraction of the visitation the Grand ‘Yawn receives.  And we live within 100 miles of the nearest parts of it. 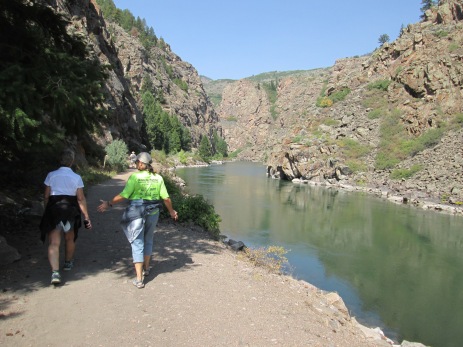 Good for Sue for arranging this!  Betty walks with Linda along the old railroad grade to the boat tour dock and starting point, maybe 1/2 mile further.  The hike along the railroad route, AND about 250 or so stairs to get down to this point.  Ain’t real easy to get to — but worth it. 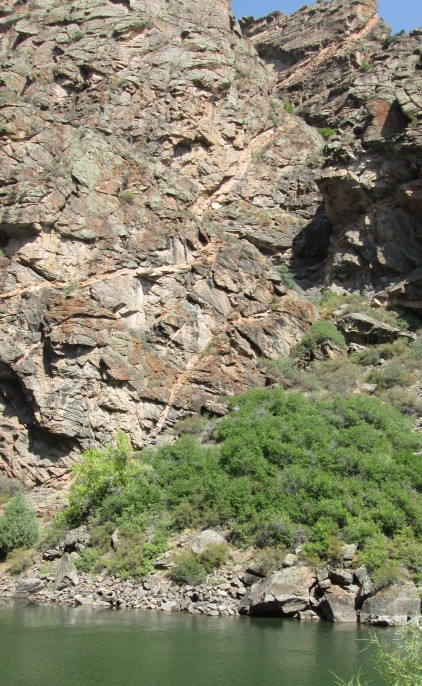 If I remember sumwhut correctly, igneous intrusions into the pegmatite.  Whatever that is.  In short, most the rock the Gunnison River cut through to make the canyon is of Precambrian origination.  Granites and such. 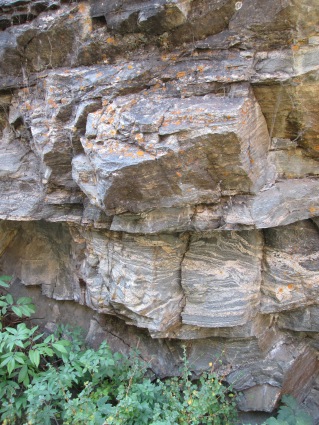 I liked the “marble-iz-ation” of most the rocks ~

Okay, a ‘selfie’ from the boat-captain’s rear-view mirror.  Betty, below, lookin’ awake and possibly borderline jubilant at being where we were, when we were ~

Below, Park Ranger Paul describes stuff.  Seriously, he wasn’t boring, quite informative, funny at times, and for more than half the trip (which took 2+ hours) kept quiet so all passengers could just take it all in. 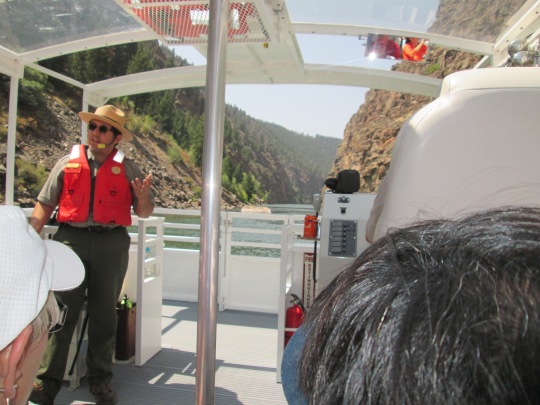 Sue (middle) with her son (closest) and grandson at edge of boat. 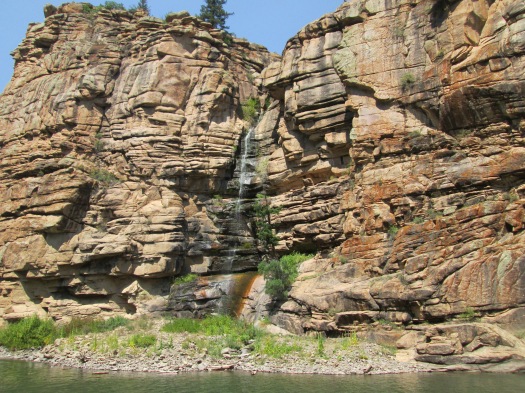 A butterfly lands on Betty’s hand, stays a while ~

Then, of course, leaves. 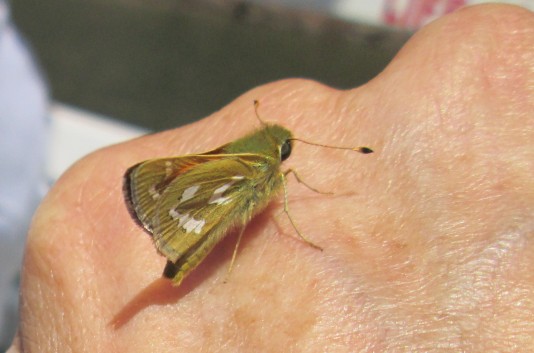 Below is the Curecanti Needle — which (as you can tell) is a high (over 500′) rocky spire.  On our return trip (the tour goes from the ‘top’ (upper part of the reservoir) down to near the dam, and back) we had a better look. 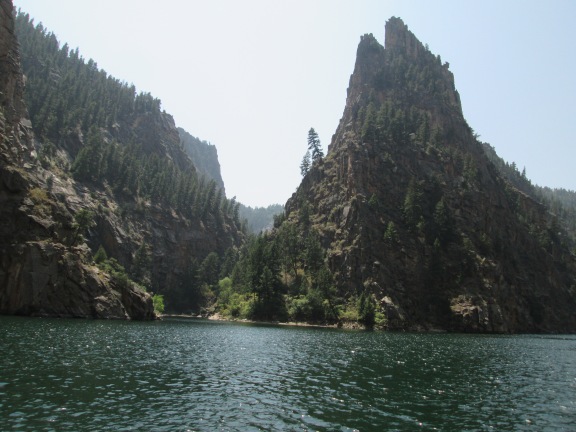 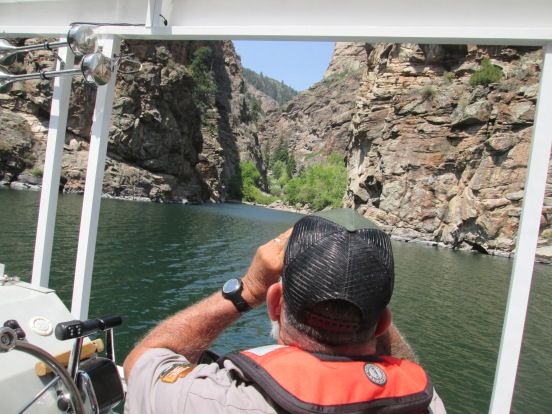 Things get more and more … canyon-y?  The granite walls get increasingly taller, the lake gets deeper, the feeling of being in Viking-land, Norwegian fjords, intensifies ~

Ranger Paul begins chapter two of his oration, mostly about the history — both man-made and geological.  Amazing, there used to be a motor-vehicle road at the former edge of the river, now many many feet below lake level, preceded by a railroad (in operation from 1882 to 1949). 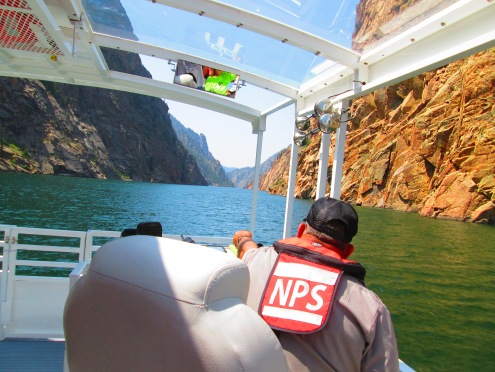 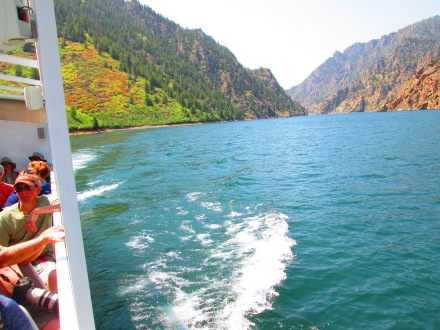 Betty and Sue cajole and radiate along with the season. The reason? The occasion, just being there.  My pictures probably don’t do this justice, but THIS PLACE IS MAGNIFICENT.

The original D&RGRR line’s logo for this track depicted the Curecanti Needle, and Ranger Paul made sure to duplicate the vista for all of us.

Above, look above the river to the right of the Needle — two rafts are parked.  I looked up towards the top as I suspected the raft’s owners were climbing.  They were (below) — you can see one figure waving back at us. 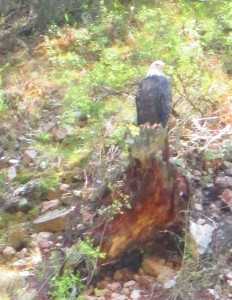 We drifted past this apparition a couple dozen feet above the river.  Betty said she thought the Park Service had put an artificial radio-controlled Bald Eagle robot so Tour-takers could see (and photograph) the U.S. National symbolic bird.

Maybe it is/was a real bird.  But it sat there, un-perturbed by the dozens of “lookee-loo;s”. 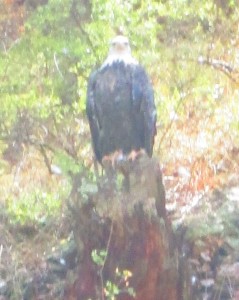 Approaching the end of the boat tour.  Betty and I hiked quickly back to our car, drove up out of the Boat Tour parking lot, a little further, went a little bit south (and up from) U.S. 50, and ate our be-lated lunch in the company of some free-roaming llamas.