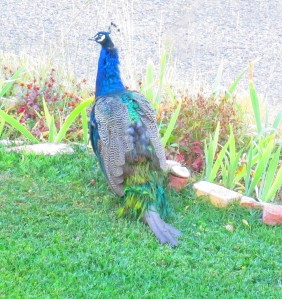 Last Satyrday I went outsighed to feed the dogs and commence the daily “outside” chores.  The dogs were really interested in signs and scents and such in the lawn to the north of the house, and … I noticed not only a plethora, but seemingly more than a mere plethora of feathers and such which strongly suggested a bird’s demise.

The scattered feathers made a sort of trail commencing directly below the tree where Kevin (not really “ours” — but el pavo real has adopted us, and has made our place his home base for about ten years now) usually spends the night.  The feather trail continued downhill, out of our yard and into the property to the west.  Of course, I felt very sad.  “A death in the family” I told Betty, who decided not to go exercize because she was “in mourning.”

A short while later I observed the western neighbors out digging in their yard, and I surmised they were burying something.  I will ask them next encounter about this.

We decided to “get out of town” and drive to Cedaredge (50 miles away and half-way up the south side of The Mesa) for their annual “Apple-fest.” 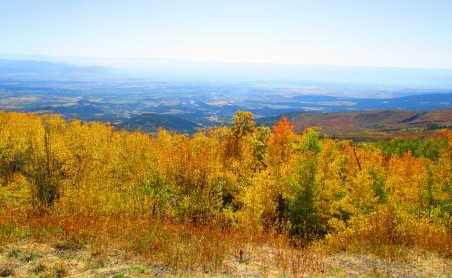 Turns out the annual Cedaredge fall festival is getting more-&-more crazy, not-just-well-attended but a bit too-much-more-so, so we stopped just short of the town and had lunch.

The wait-staff at the restaurant told us that the “Apple-Festival” had been crazy & crazier for years now, so that our experience of … traffic backed-up to bumper-to-bumper starting a few miles out of town was not unusual.

We had a delightful lunch, and found a road to by-pass the town entirely and continue up to the Grand Mesa, as part of the annual ritual to view the “Color Sunday” floral and deciduous tree autumnal transition, except we were a week late (and on Satyrday, be-sigheds). 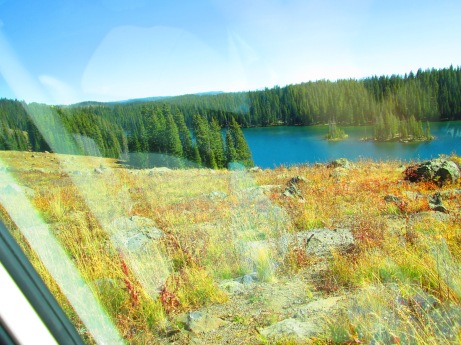 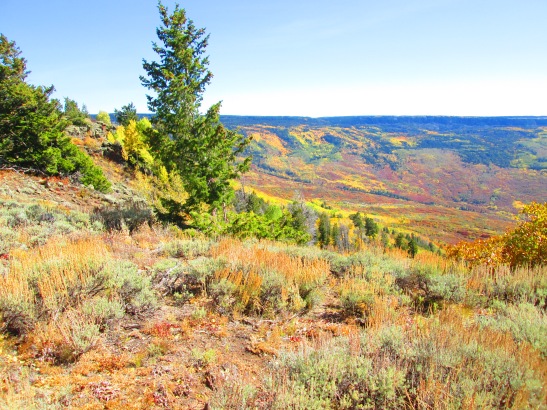 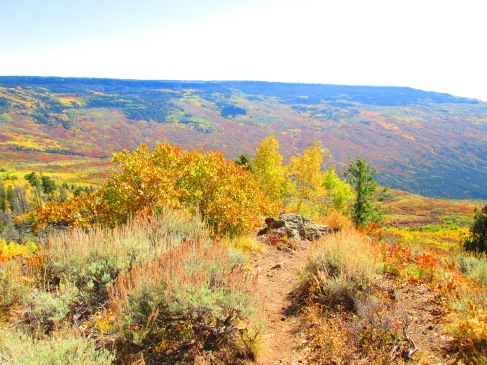 Shortly after we arrived back home, I looked out the back door, and there was …

Kevin!  so, how and why and confabble-doodah you may ask, is this possible?  Well … apparently the more-feral peacock which usually hangs out on the property northeast of ours was ambushed in the yard below Kevin’s usual roost.  We’re still sad, and think Kevin is, too, as he may be the only pea-fowl left of the original flock which ruled the neighborhood many years ago.

5 thoughts on “DEATH! and resurrection, of Kevin the Peacock (& “color Satyrday” d(e)rive over the Grand Mesa)”