There was once a large flock of peafowl.  Lots of p-cox, and lots of p-henz.

In/on a several-acre estate south of U.S. 50 in Orchard Mesa.  We moved to the neighborhood in 1992, next door to the Peafowl-Preserve.  There were many dozens of the critters – which roamed from their property-of-origin freely into and onto all adjoining properties.  They were pretty prevalent up to a quarter-mile in all directions – except U.S. 50 where the chances of crossing that 4-lane thoroughfare alive were not very good.

Kevin was the last, sole, surviving member of a tribe which at times had more than 150 members!  I will not detail the reduction, the downward-depopulation-trend, the gradual diminishment of the horde, but about 10 or so years ago he made our property his “home base.”  The flock had diminished to less than a dozen then, and the vulnerable females went extinct first.  Vulnerable?  When they’re caring for their chicks they are easy prey for coyotes and foxes and probably other predators.  A couple years ago there were just three peacocks remaining in the neighborhood.  One established his home base at a house directly opposite the pond from us, another stayed in a large undeveloped area to the east of us, and Kevin spent his nights high in a cottonwood tree next to our house.  Each of these three was fed by whoever happened to live the closest – I know the Kevin-to-the-east would show up for dinner at the house adjoining the open area  further east; the across-the-pond Kevin had to have been similarly cared-for; and “our” Kevin would, practically daily, either approach us when we were near the garage or come and look into our kitchen door when it was feeding time. 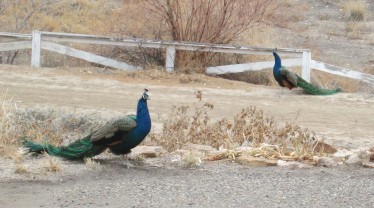 Last October a predator apparently surprised the “next-to-last Kevin”.  Ironically, the evidence of this was just below the tree “our” Kevin spends the night in.   This incident is detailed in

Yes, for most the day we thought a predator had gotten Kevin.  Turns out that “the other Kevin” must have been below Kevin’s tree when attacked.  I saw my neighbors digging in their yard, and presumed they were burying the hapless unfortunate prey.

This time (June 28) I was at home early Sunday afternoon.  Betty was not at home.  I heard Kevin squawk from the yard next door, one of our dogs became very alert and riled – the fur on her back bristling, one of our cats, also outdoors, fluffed up its tail – an indication of acute apprehension.  Kevin came running into our yard, circling the house to the front side, collapsed onto the lawn.  He lay as if asleep, wings out, the “full bloom” of tail-feathers spread out behind.  He was dead.  Betty came home shortly thereafter – I hoped Kevin would pop out of unconsciousness or whatever, but no.

We did our “ritualistic” burial in the desert, on a bluff overlooking the Gunnison River, marked by a sort of pyramid.  (I will add on to the marker each time I happen by.) 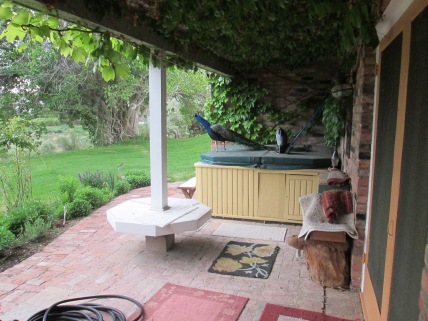 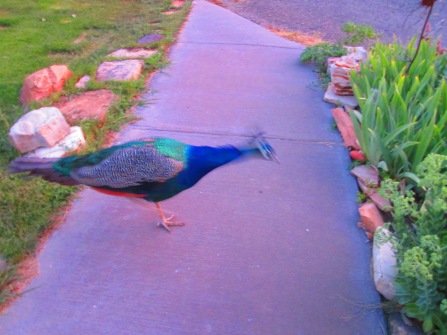 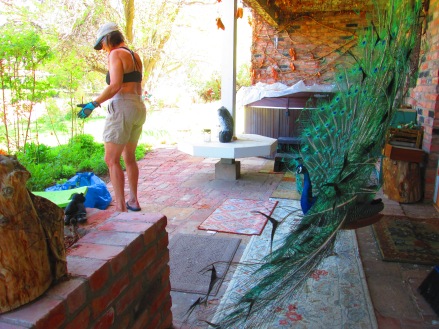 Apparently K is impressed by Betty’s gardening prowess (or lack of, prowess).

Kevin roosts on a favorite camping spot, while Annie gets the car. 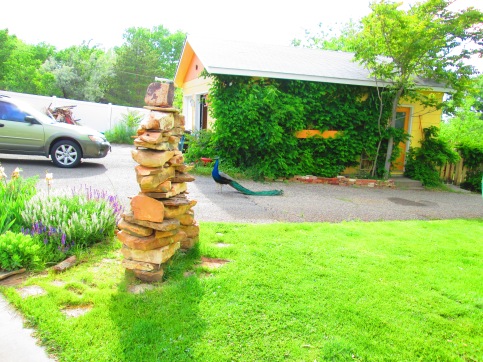 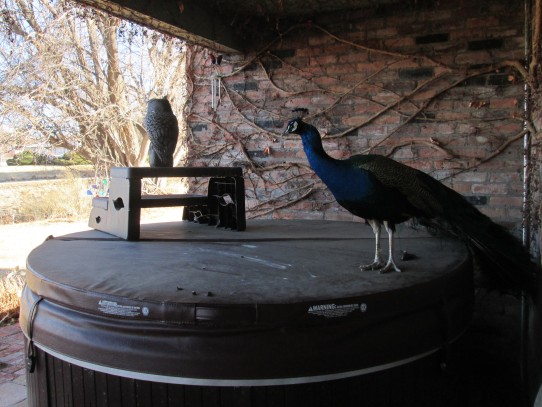 Proof that the scare-(crow)-owl doesn’t work. 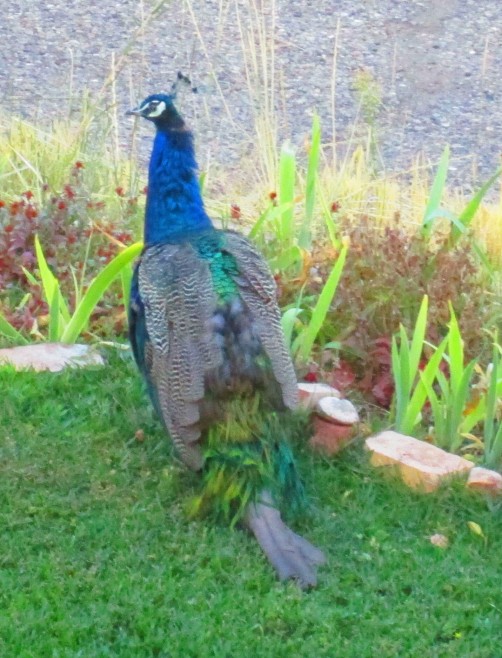 One thought on “The PeaFowl Dynasty Finally Ends”