Yeah … for my two or three semi-irregular readers who’ve possibly wondered why I haven’t been posting as semi-frequently as before, well (no pun intended?) I’ve been out “in the field” for almost three weeks. July 11 my work-mate asked if I could fill in on a plug-and-abandon (P&A, of old gas and oil wells) job he’d been overseeing. I thought it might last a half week or so.

After the first weekend, and when it seemed like this could take a while, I started to feel more than my usual depressed. Especially so when, previously, I had been going for a few days each week without beer or other similar hydration-recovery substances with a bit of sedative inherent and imbued in the mix.
Oh well … (another “well” — can’t get away from it, can(‘t) we?)

And so, I decided that there were NO DAYS OFF FROM DRINKING BEER as long as this thing lasted. I would start to cheer up, appreciably, each day at mid-afternoon — just thinking about it. When life gives you lemons … drink beer. And*

This ain’t a “big” drilling rig, but we drill anyway. We’ve been trying to P&A this old leaky well near the town of DeBunque for a while now. We’ve got the “A” team drilling company (but why the “C” team Engineer?) Oh(yl) well, makes it more challenging. Besides, I’ve got back-up a phone call away …

Sometimes it seems slow, but we need a full and competent crew when things get complicated. Sometimes they even ask me to help! I’m still somewhat useful with a shovel, or the occasional wrench, or reporting on what various fluid lines and tanks are doing. 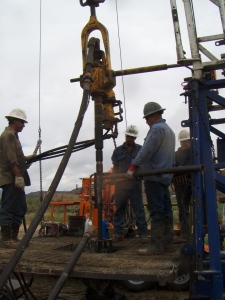 We drill and drill …

And! not at all related to THIS JOB — a hitherto dormant ancient gas well in a pasture about 1/4 mile away started leaking. We split the crew and part went to fix that, before the gnarly-nasty-waterflow reached people’s gardens another 1/4 mile or so down-valley. Didn’t exactly liven up a dull day, but we had the satisfaction of two jobs at the same time — and “saved” a few organic gardens while we were at it. Note the references in the note, following, about the “waterflow.” 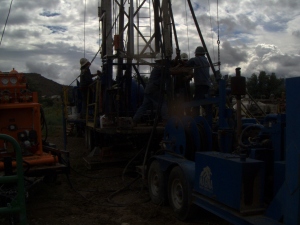 Finally! we near our objective and call for the cementers to come out. I tried to summarize our status in an email to interested? and otherwise parties back at the offices —

I left a message with Mark earlier today with the update on the “Waterflow”.
DeBunque “Waterflow”:– up until mid-day today Olivivas Energy Services and I thought that the source of the ‘water-flow’ was a one-inch metal pipeline, which had ruptured. We dug down and thought that we had identified a specific leak and were pursuing a plan to cap the leak. We then discovered that the waterline was connected to a well. This line was connected via a connection out of the top of a Larkin wellhead (Joaquim Guzman (Olivivas) provided this identification). Although it was “somewhat challenging” Joaquim installed a 3-foot metal pipe into the wellhead with a shut-off valve. I conveyed the current status to the property owner. We (Olivivas and I) consider the waterflow problem as “temporarily” solved. By ‘temporary’ I mean that the next step would be P&A of the actual well. Of course, this contingency would not occur until next year, at the earliest. I am fairly sure that the property owner is cognizant of this, and has (so far) been quite accomodating and appreciative of our efforts.

Pasture #1: as of the end of the workday, today, we have about 30′ to reach TD. If we don’t encounter unforeseen difficulties, we should reach TD mid-day tomorrow or earlier. I don’t know the exact details of the cement plan which Kevin and Halliburton have agreed-on. (This is my fault, as I should have conducted a COGIS database search to find this). So … I’ll arrange for the cement job Monday a.m. (Of course this may (and probably will) be subject to change).

If this time-table is not severely changed, I should be in the office Tuesday (July 30) to start to enter whatever official inspection and PM reports — I would appreciate guidance and suggestions as to content, etc.
Thanks for your continuing patience and help so far,
R. Betunada
N W Area Engineer

*After a couple or three beers, it’d be time to back off on the quantity of hydration and step up on the quality of the sedatives. 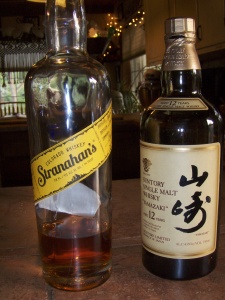 6 thoughts on “When Life Gives you Lemons …”