Gateway Canyons Resort: what does it cost to be “incredibly curious”?

July 6: I (and maybe B) had been wanting to escape the heat on a day-outing for weeks now. We loaded the dogs and the bikes into the truck and drove south on U.S. 50. We would decide en route whether to go UP to “the Mesa” or venture up onto the Uncompahgre Plateau. But … instead of goin’ up? to escape heat? no … we spontaneously decide to go, instead, down, to …

Yeah, to Gateway, probably most (in)famous as the home of the Gateway Canyons Resort.
(See, check, or click: http://www.gatewaycanyons.com )

We had visited the ‘resort’ when it was much more lower-key (heck, WE could afford to stay there! and even visited the restaurant twice). John Hendricks (Mr. Discovery Channel) decided, oh, maybe 15 or so years ago, to build his “get away from it all” second (okay, it’s probably his 4th or 5th or so) home in Gateway, Colorado. An interesting choice. There were no other billionaires anywhere near there. Unless they were really reclusive. Not many millionaires, either. It’s not Aspen, nor Vail, nor Telluride (actually, Telluride is relatively close, at about 100 miles away. It’s also less than 100 miles from Moab). He had definitely picked a place off the radar.

After a while, Mr. Hendricks decided to start to put Gateway “on the map” — whatever you construe that to mean. He built the Gateway Canyons Resort, which not only provided an up-scale motel and a restaurant, but a place to buy gas and groceries and beer and any other item which most of us can quickly zip to the corner store and acquire. Prior to this establishment being built, Gateway residents would have to drive 50 miles to Grand Junction to buy anything. Anything.

However, a couple years back, whoever runs the resort decided to “raise the bar.” Poor people need not apply (except, of course, to WORK there!). The convenience store and gas station and anything remotely affordable was replaced by a much more “upscale” establishment. The media reported (July 2012) on the “recent completion of a $100 million expansion…” Excuse me? one-hundred mil? That may not be a lot of money in the big city, but for this “wide spot in the highway” in the middull of nowear? Whew …

Mr. Discovery Channel allegedly had a vision for the Gateway Resort, “which was founded out of a passion to create a gathering place for the INCREDIBLY CURIOUS.” And, presumably, the not-so-poverty-stricken. “Enlightened travelers* are also entertained by daily showings of Hendricks’ hand-picked Best of Discovery Channel’s award-winning films.”

*well, that rules me out!

Oh, what does it cost to be Incredibly Curious? I checked the website, and for a limited time only, you can stay there for as low as $600/night.

Guess while I may occasionally be “curious” about something, I must not be “incredibly” curious.

Yes, click on the link below for your view of “the Palisade” for as low as $600/night,

or we could sit in the back of our truck in front of the Palisade. The view costs a lot less — probably the cost of gas to get there (okay, $20 round-trip). Um, also the expense of mosquito-repellent (when necessary, which it was when we were there last!) — and a loaf of bread, cheese, and the requisite bottle of w(h)ine … 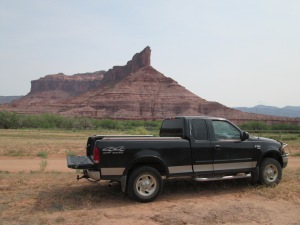 We went there partly to “check it out” as we hadn’t been there in a while, and there was a dirt road on either side of the Dolores River, which runs through there. I thought either road would be a fun, not too difficult, and scenic ride. 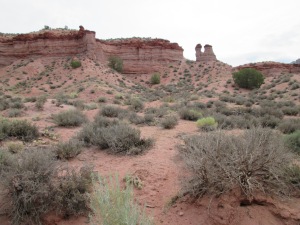 We drove slowly around the resort-compound.

We then went down the west side of the river. We noticed a coyote loping across the yard of a building at the outskirts of the resort. So casual, it seemed like it might be a pet.

We rode our bikes a short distance along the west side of the Dolores. I looked back to check on our two dogs, alternately running to catch up, then go for a splash in the river. I did a double-take when I saw THREE dogs running up. The coyote had joined them, and our dogs apparently either didn’t notice or the coyote force-field shielded his identity.

Betty got a little nervous because of “Private Property” signs so we returned to the truck and drove over to the east side of the river. The coyote wailed and lamented loudly. We figured he was bemoaning the loss of his two newest best friends.

County Road 4.3 (or is it 4.2?) — so-named because it is that distance in miles from the Utah State Line. Betty wanted to ride to Utah, and we’ll do that next time, as the road went due north for a few miles, before turning left, and, hence, 4.1, 4.0, 3.9 miles to the next state.
The “Palisade”, seen along the narrow axis on the west side, the tale of the eons of sedimentary behavior quite evident, above.
Then there were hexagons …

This blurry photo was taken from an estimated 1/2 mile or further away. Yes, I’m quite sure that they are a good example of hexagonal columns. A geologist friend has mentioned what minerals and types of rock will manifest thusly, and I should look this up! I plan on hiking over someday for a closer look.

We drove through the actual town of Gateway, which, among other things, was not only a ranch-and-farming settlement, but a uranium town. The old mill is visible from most the ‘town’ up on a hillside to the south (but NOT in my picture, sorry). Sleepy, low-key place. This view is looking over the school, grades 1 – 12. Some years the high school graduates as many as three!

RockSea exudes veritable moxie dogginess, as we look back, west, down across the Dolores Valley to the Manti-LaSal range in Utah. 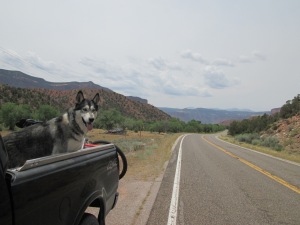 We pass (as the sign says) the Gateway Canyons resort Stables. We are part-way back home, slowly ascending Unaweep Canyon. 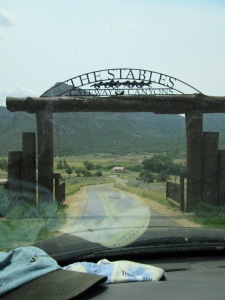 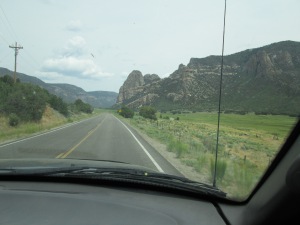 4 thoughts on “GATEWAY? or Dead End?”