every post of mine should, axually, have THAT title! 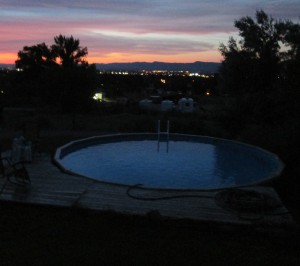 it’s been a while, dear 3 or 4 semi-regular readers. so … i’ve got a few disparate and unconnected occurences, activities and pursuits not really that active (‘passivities’?) to reminisce from the passed few months.
above, our “reflecting pool” a couple months ago. yeah, a good (and inviting) thing to have when it’s hot ‘n sticky out.

spent a weak/week in denvurr attending a course in what i’m supposed to know, something called petroleum engineering. a solid week of a more-or-less complete overview of the subject.  there’s a lot to know, and with each passing year i know a little more about it. (but there’s progressively MORE added to the total of what should be known, and i continue to lag furthur ‘n furthur behind)

my bro-in-law and i talked ’til midnight a few nites back, mostly music theory, and our own personal experiences. alcohol, cannabis, booze, talk talk talk, booze, tobacco, reminescences, a little cannabis, talk, reminesence, tobacco, booze, talk, and what he said was AT OUR AGE, LET OUR MUSIC, OUR INSTRUMENTS, DO OUR TALKING.  i don’t get to sit down and rave for hours with Rick very often.

Betty and I seem to be ramping up on public and group-playing music experiences. more and more of recent. (THAT, predictably, seems to have changed a month later.  sigh, less and less, again.)

deriving back from denvur (after a week of math equations):

oh yeah: after being bombardid by the mathematical solution and explanation of PRACTICALLY EVERYTHING in pet. engr., we were released from our classroom to return home.  i had only 250-some miles on good ol’ inturdstate 70 and was weaving along with the flow 30 or so miles later when IT started to happen: there must be (and part of my over-taxed brain started to try to sketch the details) an equation, nay, a set of equations describing/governing the rate of traffic flow.  say, so many curves (and sharpness of same) per mile, how many semi-trucks on the average, how much traffic in general, weather conditions, etc., and etc.

i would expect that there ARE equations governing/dictating the properties and physics and perturbations-to-the-force which cracks and whacks in the windshield represent.  (depixured, above).  whew.
and a couple days later, walking with a dog on the leash — rocksea turned around to look at something behind us with regular frequency.   we’d take four or so steps uphill, she’d turn to the left, look back.  this repeated with regularity a few times.  there must be an equation for THAT!

you’ll be glad to know that the idea of math formulas describing whatever mundane and inane poo-poo i was doing ceased a little later.  now i’m back to the blank stare, nothing in my head, like some saying i remember from a long time ago:

and now ’tis a month later and i’ll (to the chagrin of “keep the blogosphere a venue for rational intelligent discussion” adherents everywear) try to seque back into a post or two every once in a while, and if i can, two or three ‘offerings’ every twice in two whiles.

oh yeah, a few daze ago (10/25) i spent the entire day taking a test, which, if i passed, will bestow upon me PROFESSIONAL CERTIFICATION.  the upside is, of course, the “P.E.” after my name.  the downside is i will probably have to REALLY be accountable for my work and that periodically can bite one in the posterior.  and if i don’t pass, i can continue to bask(?) in the reflected glory of my erstwhile and certified workmates.

BEFORE the govermint shut-down, i entered a running race which is held within the confines of the North Rim (no, not of the Grand Canyawn) but of the BLACK CANYAWN National Park.  This lesser-known but none-the-less magnificent gouge made by a river into the surface of the planet is the result of a tributary of the Colorawdough — the Gunnison River.  I have never been to the north rim, though it’s easily viewable from the much-more-visited (and accessible) south rim.

And, ah, I thought, an 8k (real close to 5 miles) jog, Betty will ride her bike in the area; the event being in only the 3rd or 4th year that, so far, there aren’t that many entrants (most run the companion 20k) and I will probably win an award — as I’m at the age where one often wins a prize just for showing up!

On a different day in a different area, Betty approaches Escalante Rim from the south, whilst RockSea awaits.

The race(s) was held Sunday, October 13.  As we all know, the shut-down was still in effect and I still have not been to the north portion of the park.  Next year!  However, the race organizers were not deterred and held the event in another location a couple dozen miles away. We ran the “Leroux Creek Grand Mesa National Forest downhill runs.”

Picture is the usual boring sunrise scene from our house — but imagine that we were off the right side, maybe 20 or so miles in along the south rim of the Mesa. Same mountain, different (south) slope. (It’s a BIG mountain.)

Everyone trekked (well, everyone DROVE) way the heck up from the fabled orchards of the North Fork (of the Gunnison) area of Delta County — up to the 7500′ elevation mark in the National Forest.  Due to recent snow, and hunting season (!) just begun, AND ranchers rounding up cattle in the area, the courses were changed.  The 20k ran uphill for 2.5 miles, then down to the finish, some 7 miles from the check-in/start area.  We ‘lesser runners’ (8k) were transported 2 miles downhill, so as to have the same finish line as the 20k.  I wasn’t anxious, nor worried.  This was just going to be a casual jog, with other people, for a change.  Betty then drove our car to the finish and started to ride her bike back uphill to meet participants coming down.

Imagine her surprise when, after greeting and cheering the 8k race leader (only leading by 4 minutes at that point) the next runner she encountered … was … me.  The look on her face was “where did I miss the fork in the road where I would have encountered the REAL 2nd-place runner, along with runners #3 thru’ whatever, until I encountered Rosco?”  Yeah, it’s a tradition out here that the accomplished and fit and more competitive athletes run the longer event when there’s a choice.  Still, I was a little more difficult to live with than usual for a few days.  I nibbled, then gorged on finish-line treats, and

then we were off to find a place where (a) Betty could eat (she had qualms about partaking of the offerings ostensibly for runners-only.  I tried to tell her there was plenty!) and (b) I could sedate/hydrate — heck, my quads hurt! There was a thousand-foot elevation drop in my run!

We found a good restaurant in nearby Hotchkiss.  She enjoyed her lunch and I savored a couple draft micro-brews.

Oh:  the runner pictured above was Kevin O’Brien, age-group monster from nearby Paonia, finishing 4th in the 20k.  He won this event last year, and can run A MARATHON at a 6:30/mile pace — so the 20k was a bit more “loaded” than usual this year!  Results (and photos of everyone but me) can be viewed at http://www.sjmr.org

Part 2 of “nada moocho gwan” will mention a family re-union held earlier in the summer, an exploration to the Escalante Canyon area, and more stuff, I’m sure, though nothing specific comes to mind. yet.