My wife:  The (Lawn) Grass Nazi

Betty, under close scrutiny by JaJa, attacks yet another previously unmowed patch of

grass.  Poor innocent lawn-compositional matrix.  You’ve seen enough of those movies, where the big bad battleship-spaceships swoop down out of the skies and just blast pschidt up.  Yeah, seein’ her go at the tall uncivilized grass, reminded me of that.

It was just a couple days ago, watching her with the BRAND NEW PUSH MOWER, I realized that she is a GRASS NAZI.  Doesn’t hate well-behaved, short-clipped, obedient, thick carpet of the green stuff — but the unruly and out-of-place and rampant living outdoor carpet? — whip it into shape! 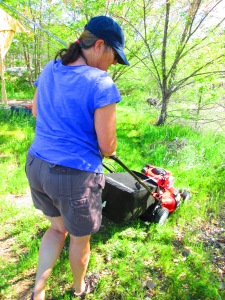 This epiphany may have originated talking with an acquaintance about a month ago.  David Ludlam, who is the executive representative of the local Oil & Gas Association (COGA) and I were attending the regional industry forum.  He probably enjoys the occasional conversation NOT about the state of the O&G industry.  (It’s grim, by the way.)   I knew his dad a while back (worked for him, even!) so I asked about his parents.

“Dad’s been retired a while now, and he spends most his time riding about the property on his tractor,” Dave said.  A spark (or if my mental is incapable of any sort of real ignition, then maybe the thought just started to smolder) lit up in my head, and I realized that Betty enjoys the same thing.  ‘Cept she doesn’t have an actual tractor, so the riding mower has to do.

I responded to David’s statement — that my wife had the same … impulse? fixation? hobby? in retirement as did his dad.  And I KNEW then that Betty would really like a tractor.  Maybe for the next anniversary, or something.

The riding mower (above) has been her mainstay principal means of attack and defense for many years.  The anti-disobedient-grass instrument of punishment and subjugation.  Besides, she (claims) she could never start my borderline-antique gas-powered push mower,

pixurd above, which is quirky and peculiar and particular.  (Sigh).  It was inevitable that a Nazi of any sort would want to acquire more weapons of subjugation.

Not even that extraterrestrial menace, the Raffiberp Ibbificators, in their resplendent Space Dome, the GONADAL IMPULSE, could have randomized an anywhere-near-equivalent potential-reality-probability-generating-the-likelihood-of-intelligent-life-existing-anywhere-on-any-planet quotient for our dear TERRA, than to bet against my ingrained perception of how things might turn out to be.

Yes, dear reader, as the epitaph regrettably should have said, IT (whatever “it” is) probably won’t get any weirder than this.  I hadn’t thought about grass-Nazi-ism but now that it was so obvious, YES, she would gladly incorporate yet another weapon of mass lawn-grass subjugation into the arsenal.

Another former-refuge of grass wildness subjugated, then further on down to the former horse-pasture ~ 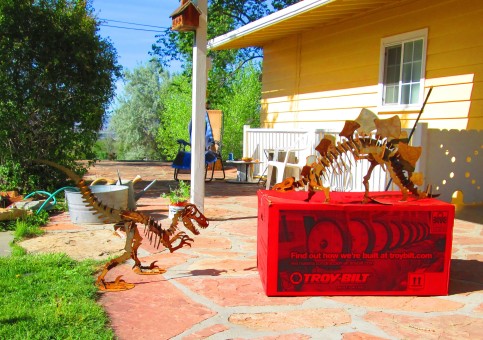 We had just barely brought THE BOX home with the new mower inside when THE YARD DINOSAURS, ever-vigilant and on-the-prowl for Things New, had to check it out.

We assembled the MOE-SHEEN together (I had eaten a, uh, cannabis ingestible a couple hours earlier, and was having more trubbull than yoozYooUhl follering dye-erexions).  Once assembled (I hoped it was ‘assembled’!)  I figured, and knew, that she had to have the “first crack” at operating.  Though she said she’d merely just see how it started up and go for a short ‘test spin’ — I knew better.  Those grass Nazis, ya’ know … 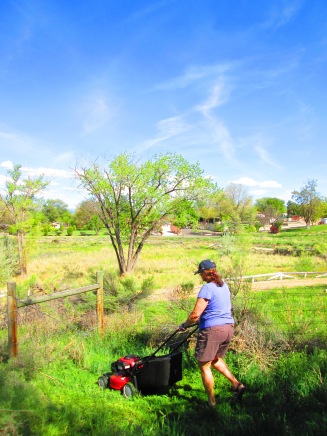 I could hardly believe it.  She pulled on the starter cord once, and BRRRRR!RRRR it started up and off she went a-chewin’ thru’ the tall stuff.  Stuff I would have had misgivings attacking with the “old” MO-SHEEN.  And yes, it was NOT a short “test spin.”

And then we went fishing.  Our pond (which we share with 6 neighbors) is just down from the house.

I was humming:  bite dey tiny heads off

except the fish we caught (Rosco is shown above with the MONSTER of the few fish we caught), well not only did they not have tiny feet to nibble, I couldn’t bring myself to bite dey tiny heads off, so we let them go.

And another (small) sign that The End Times Are Upon Us is that I had (finally?) recently retired and — aren’t we supposed to be curtailing impulse spending in this, the Limited-Income Phase of Our Lives?  But when we were at the store to buy fencing for the Canine Concentration Camp (maybe more about that later), we walked by the lawn-mowers.  Just $200?  We better buy this too ….

28 thoughts on “My wife: The Grass Nazi”