In 1973 Betty & I were living in an apartment in Gunnison, Colorado.  You may not believe this, but there was NO INTERNET then, nor satellite nor cable TV, no computer games … so we idled our ample spare time away on such things as apartment-remodeling and occasionally drinking to excess.  Oh, never mined that last comment — but B, being a fore-runner of the plethora of home-remodeling T V shows today, wanted stuff built.  We put up a barn-wood-paneled partition in one room.  Made a dining room table!  and other tasks involving a lot of wood-cutting.

We had to borrow an electric skill-saw from a neighbor, and before long purchased our own.  Purchases such as this were not minor for us, and I think we paid about $20.

Just yesterday we decided to install a new ‘cover’ over an old cistern next to the driveway.  We periodically have to install a safety-cover (okay, we just “seal it off”) — so people or cars don’t fall in.  In our spare lumber-pile was a big sturdy  board — 11″ wide x 2″ thick — which Betty decided would be perfect.  We pulled out the saw and cut through the first of three pieces.  The saw lost power and the blade barely turned when trying cut #2.

We mulled.  We considered.  In our minds was being written the epitaph for the demise of the saw.  “Does it need oil?” she asked.  I had never (or certainly don’t remember) oiled this tool.  Turning it over and around I noticed a small hole in the casing.  The word “oil” and an arrow were adjacent.  We added a bunch of 3-1 household oil.  The saw would turn on, but lost power quickly.  I had a spare blade which I switched with the previous one.  Cuts #2 and #3 went relatively smoothly.  “Gang-busters”.

Georgia watches the proceedings from the shade of the truck. 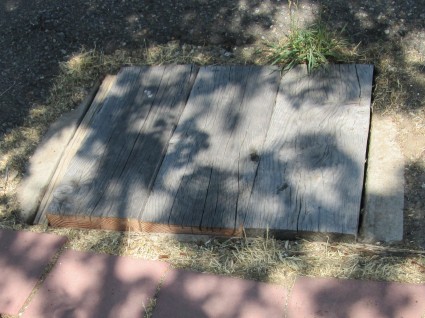 This is a fairly big concrete cistern opening — three feet long by almost the same width.  We’ve got it sealed for now, and even the occasional (and errant) vehicle driving over it shouldn’t break it up — as has been done a few times in the past. 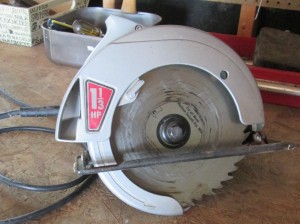 Okay — maybe this saw ISN’T the world-record-holder for long-lasting continuously-used (we use it a few times EVERY year) power tools, but it certainly is a candidate for it.  Forty-four years and it still works!

8 thoughts on “A Candidate for the Longest-Lasting Continuously-used Power Tool. Ever.”